From Being a UPSC Aspirant to A Famous Personality: 10 Names Who Made it Big Despite Failing

While some failed to qualify the exam, others chose a different career path even after qualifying, These ex UPSC aspirants will give you hope ahead of the UPSC career. 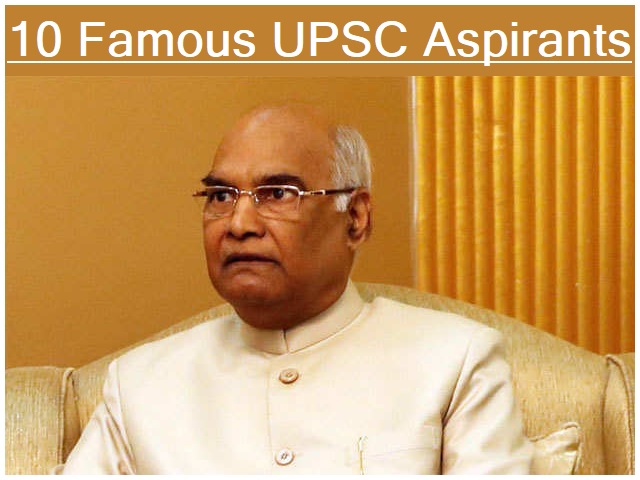 10 UPSC Aspirants Who Made it Big Despite Failing

UPSC civil services is considered as one of the most coveted professions of India. While lakhs of aspirants run for this race every year, some achieve the target and many don’t. In the mob of UPSC aspirants, many take another path and execute their “Plan B” into action. A handful of these even go on to achieve fame and popularity in their alternate career paths. In this article, read about 10 such famous personalities who were once UPSC aspirants but either didn’t succeed or didn’t secure a rank as they desired for a particular service. Let’s have a look at these famous UPSC aspirants and their current careers.

The current President of India, Shri Ram Nath Kovind was once a UPSC aspirant. He had moved to Delhi to prepare for the civil services exam and successfully cleared the exam in his third attempt. However, he was allotted allied services and hence did not join the services.

The well known veteran politician and lawyer Mr. Kapil Sibbal was also once a UPSC aspirant. You would be surprised to know that Mr. Sibbal had successfully qualified the exam and was allotted to Indian Administrative Services (IAS). However, the politician wanted to join the Indian Foreign Services and hence, rejected the offer. Instead, he went on to pursue law at Harvard Law School.

Popularly known as the father of the Green Revolution in India, M.S. Swaminathan had cracked UPSC and qualified for the Indian Police Services. Instead, he chose to take up a fellowship with UNESCO at the Wageningen Agricultural University, Netherlands.

Subhas Chandra Bose cleared the civil services exam in 1920 in England, but resigned from his position after a year later. In his resignation letter, he wrote "Only on the soil of sacrifice and suffering can we raise our national edifice."

Tehmtan R. Andhyarujina was an Indian lawyer and jurist. He was a designated senior advocate and practised at the Supreme Court of India. He was the Solicitor General of India from 1996 to 1998. Mr. Andhyarujina was also a UPSC aspirant and was successful in qualifying the exam. Although he chose to pursue law as a career.

The TV actress has on multiple occasions talked about her accidental career swap. Sakshi was planning to prepare for the UPSC Civil Services exam but was miraculously landed in the acting career as a replacement for an anchor on a TV show. Sakshi is one of the most renowned TV actresses and she pursued her acting career since then.

This stand up comedian from Meerut is well known among his audience for cracking jokes about UPSC preparation. Anubhav is a law graduate from National Law University and shifted to Delhi to prepare for UPSC exam. However, fate had some other plans and this small town boy is now a well known stand up comedian.

Comedian Balraj Syal gained popularity with his gimmicks on the show Comedy Circus and Fear Factor: Khatron Ke Khiladi. However, comedy was not a preferred career choice for Balraj who was studying for UPSC prior to his acting and comic career.

Roman Saini can be categorized as one born different- in a unique way! Roman cleared the AIIMS entrance examination at the age of 16 and cleared UPSC Civil Services Exam 2014 in his first attempt. He was the youngest IAS then and was appointed as a collector in Madhya Pradesh. Roman, however, resigned from the administration services and began his entrepreneurial venture - Unacademy.

This UPSC topper has won Delhi Fresh Face 2015 title, been a Femina Miss India Finalist, and has walked the most renowned ramps of India. UPSC Civil Services 2019 AIR 93 Aishwarya Sheoran is surely an inspiration for the women of today!

While lakhs of aspirants are running after to join this coveted profession, many of these personalities either failed or rejected this job to make their own path. Nevertheless, there is always a Plan B, and it can work wonders for some!