In this article, we will discuss the best 10 ways to score high in GK questions in NDA & CDS exams. 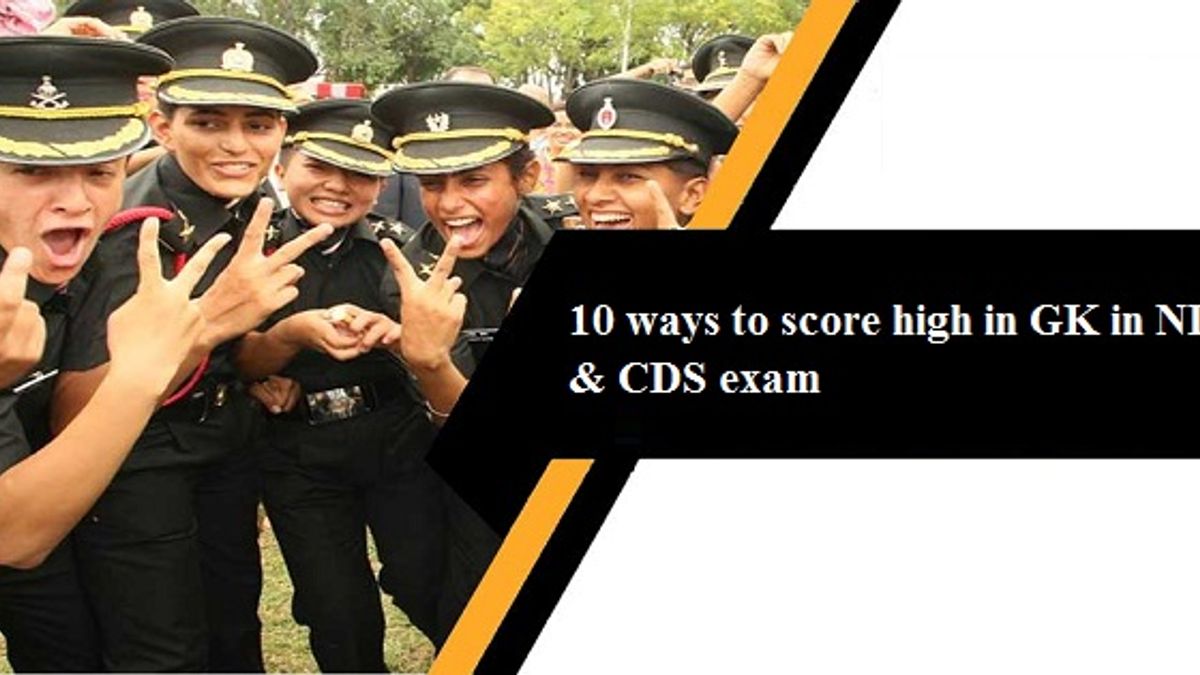 There are two ways to become an officer in Indian Armed Forces. First one is the open competition through NDA & CDS exams and second one is the direct entry. In first option, you have to compete with the huge crowd. While in the second option, you can directly appear in the SSB interview. With both the options, you can become an officer in armed forces. If you opt for the open competition, you have to appear in NDA or CDS exam. NDA exam is for those candidates, who have recently passed 10+2 exam and age under 19.5 years. While CDS exam can be attended by those candidates, who have passed their graduation and age under 24 years. Both the exams are conducted twice in a year by Union Public Service Commission (UPSC) ­­for getting an entry into Indian Military Academy, Airforce Academy, and Indian Naval Academy.

General knowledge questions are asked in both exams. As the syllabus of GK is very vast, candidates used to get worried about its preparation. It is true that GK cannot be prepared in short duration. It requires a lot of hard work and time.

In this article, we will discuss the best 10 ways to score high in GK questions in NDA & CDS exams. Please go through the following article to know these methods in detail-

GK plays an important role to score high in NDA & CDS exams. The asked questions are very general in nature and require a systematic study. Few methods to study GK are as follow-

Syllabus analysis can be the very first step in NDA & CDS preparation before heading to the study. You are advised to analyze the subject wise syllabus of GK and identify your strong & weak areas. At this step, you can prepare a list containing your strong subjects and those subjects that need improvement or thorough study. With this list, you can get an insight of your retained knowledge and the areas of further improvement. It will also help you in setting the priorities of the topics to be studied. You should take this step very seriously.

There are numerous sources, where you can get previous year papers of NDA & CDS exams. It is advised that you should go through at least last 5 year’s question papers. In this step, your job is to prepare the breakup of questions.

In this activity, you are required to prepare a list having the name of topics and the number of asked questions in the previous year papers. Since all questions carry equal marks in the examination, therefore you can get an idea about the importance of a particular topic with this list. Hence, combining this approach with the outcome of the syllabus analysis, you can estimate the required efforts to prepare for the GK topics.

We recommend you to practice these previous year papers time to time during the exam preparation. It is very helpful in testifying your gained knowledge periodically.

To prepare for GK questions, you should refer the standard books comprising the relevant topics. Most of the asked questions in these exams belong to History, Geography, Politics, General Science, etc. and the syllabus for these subjects is not going to change. Hence, we recommend you to read only those books, which cover the full syllabus mentioned by UPSC in its notification. Few books to prepare GK for NDA & CDS exams are given below-

Magazines also play an important role not only in the written exam but also in SSB interview because there are few questions through which some details about the latest government policies, technological reforms, etc. are enquired. Apart from this, these magazines will be resourceful in SSB interview as well at the time of participating in GD and lecture rounds.

There are numerous magazines available in monthly, semi-annual, and annual subscriptions for GK preparation. Few of them are given below-

Science & News channels are also helpful in grabbing knowledge. There are several TV channels, News channels and informational programs that you can refer. In this way, you will not only raise your knowledge level but also learn some specific topics in an easy way. NATGEO, Discovery, DD News, BBC, etc. are some examples of science & news channels.

Nowadays, social media is a very important part in ours daily life and no one can ignore the reach of social media. You can get different kind of information instantly on social media platforms like Facebook, Twitter, etc.

There are several Facebook pages on GK preparation that you can follow. Hence, we advised you to take the full leverage of such facility and please do not underestimate the importance of Social Media. It can certainly help you to qualify the NDA & CDS exams in many ways.

After gaining knowledge through several sources, it becomes very necessary to test your knowledge. There are various online test series, which can give you the experience of real time examination. Attempting such test series is also very helpful in improving your question solving speed and boosting confidence. Few platforms offering online test series are as follow-

Last but not the least- Practice makes a man perfect. Hence, practicing hard during the preparation phase will definitely help you in scoring high in the examination and there is no alternative of it. Hence, practice through different methods and sources. You can refer the above stated methods for GK preparation or you can start preparing in your own way.

If you found the above information on “10 ways to score high in GK in NDA & CDS exam” useful, then visit our NDA|CDS webpage for more such information.