Institute of Banking and Personnel Selection (IBPS) will be conducting common written examination for recruitment of Specialist Officers. The IBPS SO Exam 2015 will be conducted in the month of February 2015

The banking team of jagranjosh.com has come up with concept and sample questions for Alphabet Test (Reasoning).

Click here to read other sample questions under various types

Here, we have to arrange letter-words according to alphabets or dictionary.

Example 1 If the letters in each of following five words are first rearranged in the alphabetical order, and then the groups of letters, so formed are rearrarged as in a dictionary. Which word would have its group of letters in the middle among the five?

Example 2 How many such pairs of letters are there in the word CORPORATE each of which has as many letters in the same sequence between them in the word as in the English alphabet?

Click here to read other sample questions under various types 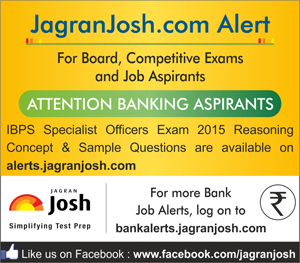