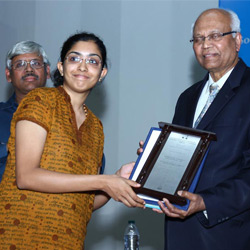 All set to revolutionize women safety in India

Vellore: According to Indian police records, a high incidence of crimes against women has been reported over the past decade. So much so that the National Crime Records Bureau reported in 1998 that by 2010 growth in the rate of crimes against women would exceed the population growth rate; which it clearly has. So the question is how we create a society that provides safety and security to women in such a dangerous environment. Well, VIT University, Vellore, might have solved this mystery.

Her project is a ‘Voice Activated Safety App’, which she plans to name FRIEND.

"The objective of this app is to provide enhanced safety and security to women in particular women, from dire situations such as kidnapping, rape and the threat of stalkers. Often, time is of essence in these circumstances. A solution which provides timely location information and /or an on-demand \'virtual company\' will improve chances of detection, prevention, or deterrence," explains Mithila, a final year, B.Tech. Electronic and Instrumentation student.

The expected outcome is women-and-child safety. She says that the problem it will solve is, that in dire situations like rape, kidnapping, acid-attack or stalking, this app will provide timely location information and will reach trusted contacts as effectively as possible.

"So if a women screams a keyword such as 'Danger', the app will automatically alert emergency numbers," she says.

It will also implement bluetooth-hopping and emotion-analysis (to detect distress signals even more efficiently) to make it as intelligent as possible.

However, there were also some initial hiccups. "The conceptual and methodological challenges mainly were the advanced technology to be implemented in the app. In addition, keeping battery and memory capacities of the phone were challenges as the battery must not run out quickly. The harshest infliction to a person’s being - especially if the person is a woman or a child – is when the person is in a situation of intense distress and none who can provide protection is around. The distressing situation can be both mental and physical," says Mithila.

The app is a mobile solution which provides early warning and tracking services aimed at providing a degree of succor. Broadly, its functionality spans situation sensing, situation recording- locally, and situation broadcasting. The biggest strength of this tool is that the solution aims to provide span both the obvious and simple [such as GPS tracking] and the more subtle and complex [such as phrases recognition, probabilistic tracking, and device hopping].

"We are working on getting it to the app store or play store in a month's time and it will be free of cost. Our purpose is to do something for the society. We wish no returns from the initiative other than the satisfaction of having helped make a timely difference in the lives of people - especially women and children - caught in difficult situations," she says adding that a tool such as this will not only provide remedy, it will act as a deterrent too when availability of such a robust tool receives wide publicity. There will thus be a very positive impact on the society as a whole.

As far as environmental concerns are concerned, Mithila says, everything has been taken care of.

"The tool introduces no new environmental problems other than those introduced by mobile phones and mobile wearables. It aims at being effective across the entire range of mobiles - including the most basic - and this, combined with the developers' societal interests  will help the solution find rapid diffusion among the largest number of target uses including those among the economically and developmentally challenged,"

Along with her guide Prof. Monica Subashini M. Mithila hopes to reach as many people as possible and help women in dire situations with this one-of-a-kind application. Her worked was lauded and appreciated by VIT Founder & Chancellor Dr G Viswanathan, Vice Chancellor Prof Raju and Vice Presidents.

Disclaimer: The information provided in this Notification is solely by Symbiosis Institute of Media and Communication, Jagranjosh.com bears no representations or warranties of any kind, express or implied, about the completeness, accuracy, reliability, suitability or availability with respect to the information. Individuals are therefore suggested to check the authenticity of the information.