Read the CAT exam analysis from IMS Learning for the Slot 3 exam which was conducted in the evening session on 29th November 2020. Get complete information about Difficulty level of exam and CAT 2020 expected cut-off. 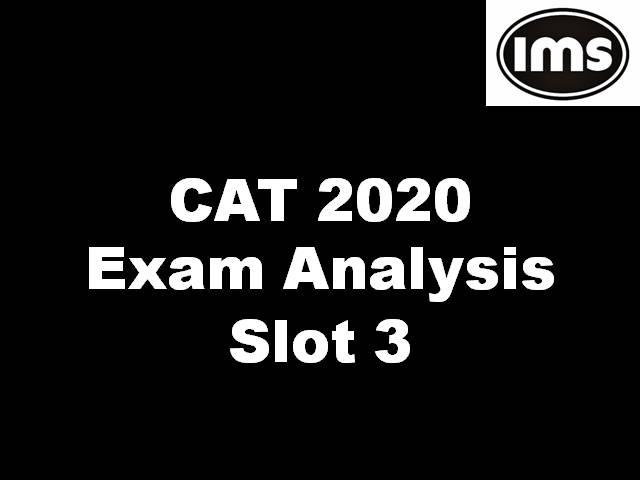 CAT 2020 Exam Analysis by IMS Learning – Find out the CAT 2020 exam analysis shared by the experts of IMS Learning, one of the leading institutes for MBA entrance coaching. Here is the complete analysis of CAT 2020 exam that was conducted in the slot 3 (evening session) between 4:30 pm and 6:30 pm on 29th November.

With the third slot of CAT 2020 being over, it is now clear that CAT 2020 was more difficult than CAT 2019 and more like CAT 2018. Pandemic and the related SOPs notwithstanding the conduct of the test in three slots was smooth and without glitches.

Though the CAT had announced a significant reduction in the test duration from 3 hours to 2 hours earlier, candidates were kept guessing about the other changes with the IIMs making no further announcements. The suspense came to an end only with the first slot.

The third slot had the same structure as the first two slots and was similar in the overall difficulty level.

The overall difficulty level of Slot 3 was tougher than the earlier 2 slots, with the LOD of the DILR Section being more difficult than both the earlier slots, and VARC and QA sections being on par with Slot 1.

Based on the feedback received from IMS students, we estimate the scores and percentiles for Slot 3 as follows:

Like in the earlier slots, the test started with the VARC Section followed by DILR and QA sections. Each section was timed for 40 minutes. One could not go back and forth between sections. The marking scheme was +3 for every correct and -1 for incorrect answers. There was no negative marking for TITA Qs.

Overall, an attempt of 15 to 17 questions with high accuracy (85-90%) should be good in this section

There were two DI sets and three LR sets. Overall, this section was medium to difficult.

Identification of right sets to attempt was the key. Sets 1 and 5 must not have been missed. A good student should have been able to solve 11 to 13 questions in the given time limit.

There were 8 TITA Qs this year. Overall this section was at Medium level of difficulty. Selecting the right questions to attempt was the key. Good students should have been able to attempt about 16 to 18 questions in the given time.

Overall, this section was medium in terms of Level of difficulty.

The test interface was very user friendly and exactly the one provided in the official CAT Mock Test. There were no subdivisions within each section. The Comprehension and VA questions were NOT interspersed within the section. Similarly, the DI and LR sets were also NOT interspersed

At the end of the test, a summary of the number of questions attempted, visited, and not visited was displayed for each section.

There was a button marked ‘Question Paper’ that opened up a screen containing all the questions of the section. This was used by students for planning their approach for the section.