CBSE Class 10 Science revision notes for chapter 4 - Carbon and its Compounds are prepared by the subject experts. These notes are based on the revised syllabus. 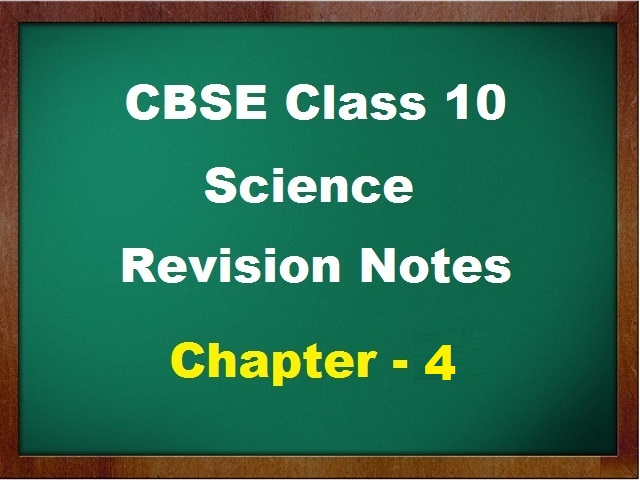 Check CBSE Class 10 Science Quick Revision Notes for Chapter 4 - Carbon and its Compounds. These notes have been prepared according to the revised syllabus. Topics excluded from the reduced syllabus have not been covered in these revision notes. You refer to these notes for the quick revision of the chapter before the upcoming CBSE Class 10 Science Board Exam 2021. You may also solve the questions given at the end of the notes for self-assessment.

Revision Notes for CBSE Class 10 Science Notes for Chapter 4 Carbon and its Compounds:

Covalent Bond: The bond formed by mutual sharing of electron pairs between two atoms in a molecule is known as Covalent Bond.

The atomic number of carbon is 6 and its electronic configuration is 2, 4. Therefore, needs to gain or lose four electrons to attain noble gas configuration. But it is not possible for carbon to form ionic bonds due to the following reasons:

(i) It could gain four electrons forming C4- cation. But it would be difficult for the nucleus with six protons to hold on to ten electrons.

Carbon overcomes this problem by sharing its valence electrons with other carbon atoms or with atoms of other elements. Thus, carbon forms covalent bonds.

The atomic number of hydrogen is 1. Hence it has one electron in its K shell and it requires one more electron to fill the K shell. So two hydrogen atoms share their electrons to form a molecule of hydrogen, H2. 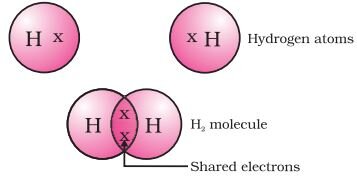 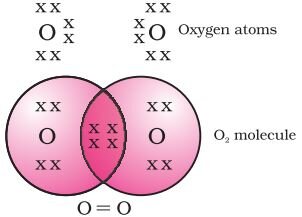 Nitrogen has the atomic number 7. So it has five electrons in its L shell and it requires three more electrons to complete its octet. So, in order to attain an octet, each nitrogen atom in a molecule of nitrogen contributes three electrons giving rise to three shared pairs of electrons that results in a triple bond between the two atoms. 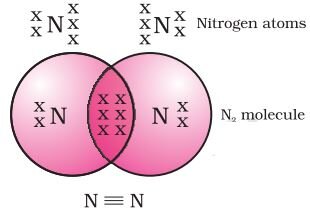 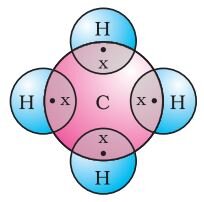 There are three allotropes of carbon - Diamond, graphite and Fullerene

In diamond, each carbon atom is bonded to four other carbon atoms forming a rigid three-dimensional structure.

→ It is the hardest substance known.

→ It has high melting point.

→ It is a bad conductor of electricity.

→ It is used in making jewellery. It is also used in cutting and drilling tools.

→ Each carbon atom is bonded with other three carbon atoms in the same plane forming hexagonal rings.

→ These rings are stacked over each other through weak Van der Waals forces.

→ Graphite is also a very good conductor of electricity.

→ It is used as dry lubricant.

→ It is used in making pencil lead.

→ C60, also known as Buckminsterfullerene, is the most common form of fullerenes.

→ It has carbon atoms arranged in the shape of a football.

→ It consists of 60 carbon atoms arranged in 12 pentagons and 20 hexagons,

Carbon is included in ten formation of a variety of compounds. This is due to the following two reasons:

(i) Catenation: Carbon has the unique ability to form covalent bonds with other atoms of carbon, giving rise to large molecules. This property is called catenation.

Carbon exhibits catenation property due to the following reasons:

→ Size of the carbon atom is very small. This enables its nucleus to hold the shared pair of electrons strongly.

→ The carbon-carbon bond is quite strong.

(ii) Tetravalent Nature: Since carbon has a valency of four, it is capable of bonding with four other atoms of carbon or atoms of some other mono-valent element.

Compounds of carbon and hydrogen are known as hydrocarbons.
For example - Methane (CH4), Ethane (C2H6), etc.

Saturated hydrocarbons: These hydrocarbons have all carbon-carbon single bonds. These are known as alkanes.

where n = number of carbon atoms

Unsaturated hydrocarbons: These hydrocarbons have at least one carbon-carbon double or triple bond.

The compounds with the same molecular formula and different physical or chemical properties are known as isomers. 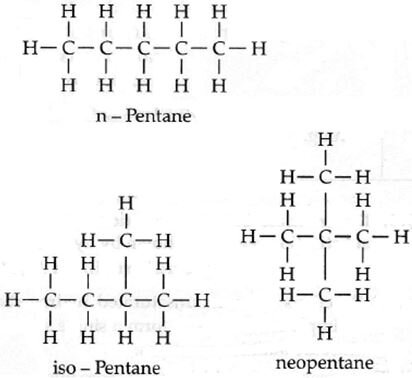 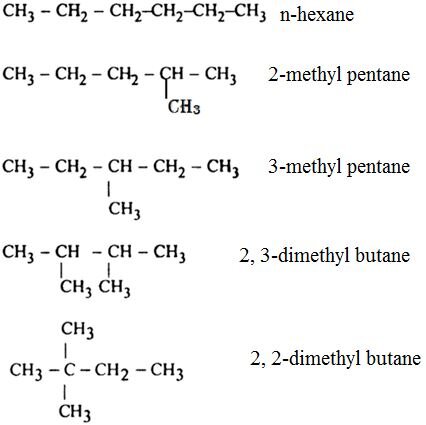 A series of organic compounds having the same functional group and chemical properties and in which the successive members differ by CH2 unit or 14 mass units is known as Homologous series.

Characteristic of homologous series are:

Topics deleted from the chapter:

Q. How are covalent compounds different from ionic compounds?

Q. What are the two properties of carbon which lead to the huge number of carbon compounds we see around us?