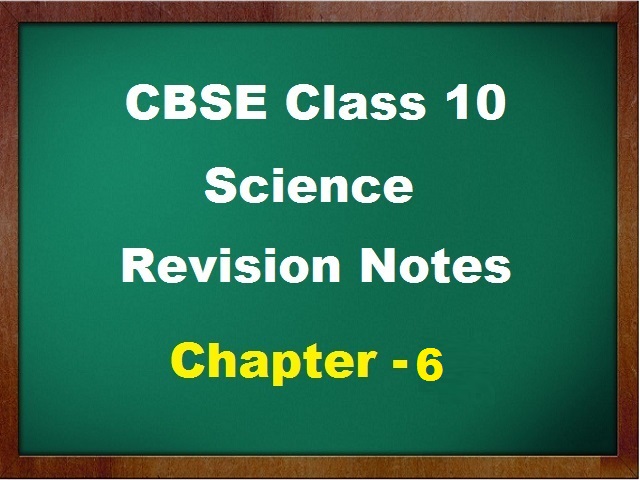 Check here the CBSE Class 10 Science Notes for Chapter 6 - Life Processes. These notes are according to the revised CBSE Class 10 Science Syllabus and are extremely helpful for quick revision of the chapter before the upcoming CBSE Class 10 Science Board Exam 2021. All the topics have been explained in a very clear and simple manner. You may also try the important questions given at the end of the notes to assess your preparedness for the examination. .

Life processes: The processes which together perform this maintenance functions of living organisms like respiration, nutrition, circulation, excretion, etc., are called life processes.

Living Being: Living beings are those who show all the characteristics of life i.e., growth, movement, reproduction, respiration, etc. They live, die and become a part of nature again.

Nutrition: The process by which an organism takes food and utilizes it to get energy, for growth, repair, maintenance, etc. is called nutrition.

Need for Nutrition: Organisms need energy to perform various activities. This energy is supplied by the nutrients obtained from nutrition.

Heterotrophic Nutrition is of three types:

a. Saprophytic nutrition - It is a type of nutrition in which organisms feed on dead and decaying matter. For example, fungi.

b. Parasitic nutrition - It is a type of nutrition in which organism feed on living host. For example, Cuscutta.

c. Holozoic nutrition - It is a type of nutrition where an organism takes in whole food and breaks it inside the body. For example, Amoeba.

Photosynthesis: Photosynthesis is a process which utilizes carbon dioxide and water in the presence of sunlight and chlorophyll to synthesize carbohydrates like glucose.

The following events occur during the process of photosynthesis:

(i) Absorption of light energy by chlorophyll.

(ii) Conversion of light energy to chemical energy and splitting of water molecules into hydrogen and oxygen.

Stomata: Stomata are the tiny pores present on the surface of the leaves. 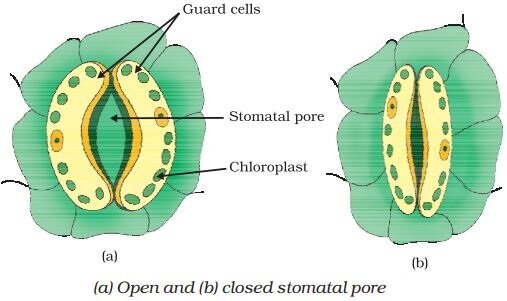 ➡ Stomata facilitate gaseous exchange in the leaves for the purpose of photosynthesis.

➡ The opening and closing of the stomatal pores is controlled by the guard cells.

➡ Amoeba is a unicellular animal which follows the holozoic mode of nutrition.

➡ The engulfed food gets enclosed in a food vacuole.

➡ Inside the food vacuole, complex substances are broken down into simpler ones resulting in digestion, absorption, assimilation.

➡ The remaining undigested material is moved to the surface of the cell and thrown out. 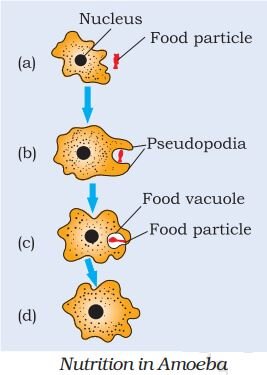 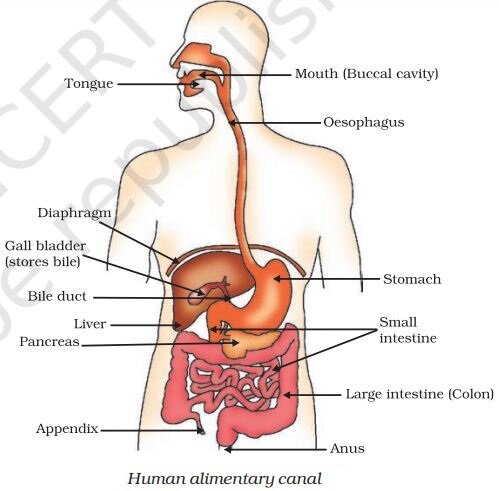 Process of digestion of food in human beings

➡ Food is taken in through mouth where it is moistened by saliva.

➡ The food is chewed in mouth by the muscular tongue. It then moves down the alimentary canal.

➡ The lining of canal has muscles that contract rhythmically in order to push the food forward.

➡ The food is taken to the stomach through the food-pipe called oesophagus.

➡ The muscular walls of the stomach help in mixing the food with more digestive juices.

➡ The gastric glands present in the wall of the stomach release hydrochloric acid, a protein digesting enzyme called pepsin, and mucus.

➡ Hydrochloric acid creates an acidic medium which facilitates the action of the enzyme pepsin. It also kills bacteria entered through food and prevents infection.

➡ From the stomach, the food now enters the small intestine (the longest part of the alimentary canal).

➡ Complete digestion of carbohydrates, proteins and fats occurs in small intestine. It receives the secretions of the liver and pancreas for this purpose.

➡ Bile juice from liver helps in emulsification of fats.

➡ Pancreas secrete enzymes such as trypsin for the digestion of proteins.

➡ The walls of the small intestine contain glands which secrete intestinal juice. It finally convert the proteins to amino acids, complex carbohydrates into glucose and fats into fatty acids and glycerol.

➡ Digested food is then absorbed by the walls of the small intestine.

➡ The inner lining of the small intestine has numerous finger-like projections called villi which increase the surface area for absorption of food.

➡ The villi are richly supplied with blood vessels which take the absorbed food to each and every cell of the body to meet their energy requirements.

➡ The unabsorbed food is then transferred to large intestine where water is absorbed from it.

➡ The rest of the material is then removed from the body via the anus.

Respiration: It is a metabolic process which involves breakdown of food to release energy.

➡ The first step in all three cases is the break-down of glucose into a three-carbon molecule called pyruvate. This process takes place in the cytoplasm.

The energy released during the process of respiration is used up to synthesize the ATP (adenosine triphosphate) which is used to fuel all other activities in the cell.

Since the amount of oxygen dissolved in water is comparatively lower than that in air, the acquatic animals have to breath rapidly to take in sufficient oxygen. Thus, the rate of breathing in aquatic organisms is much faster than that seen in terrestrial organisms. Fishes take in water through their mouths and force it past the gills where the dissolved oxygen is taken up by blood.

➡ Air is taken into the body through the nostrils.

➡ The air passing through the nostrils is filtered by fine hairs that line the passage. From here, the air passes through the throat and into the lungs.

➡ Within the lungs, the passage divides into smaller and smaller tubes which finally terminate in balloon-like structures which are called alveoli.

➡ The walls of the alveoli contain an extensive network of blood-vessels where the exchange of gases take place. 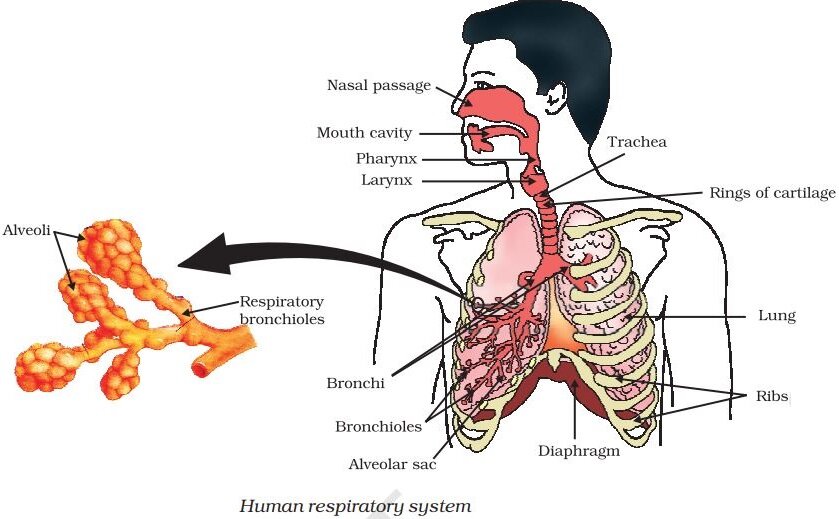 Haemoglobin: It is a respiratory pigment in humans that carries oxygen to different parts of the body.

Plants have stomata (present in leaves) and lenticels (present in stems) which are involved in the exchange of gases.

➡ Transportation in humans is done by the circulatory system. It is responsible for the supply of oxygen, nutrients, removal of carbon dioxide and other excretory products.

➡ The circulatory system in humans mainly consists of blood, blood vessels and heart.

Heart: It is the main pumping organ of the body which is composed of cardiac muscles.

➡ It is divided into four chambers which are involved in the transportation of oxygenated and deoxygenated blood.

➡ Oxygen-rich blood from the lungs comes to the thin-walled upper left chamber of the heart called the left atrium.

➡ The left atrium relaxes when it is collecting this blood. It then contracts, while the next chamber, the left ventricle relaxes so that the blood is transferred to it.

➡ The left ventricle then contracts so that the blood is pumped out to the body.

➡ De-oxygenated blood comes from the body to the upper right chamber called the right atrium.

➡ The left atrium relaxes when it is collecting this blood. It then contracts, while the next chamber, the right ventricle dilates so that the blood is transferred to it.

➡ Right ventricle then pumps the de-oxygenated blood to the lungs for oxygenation.

Cardiac cycle: One complete heartbeat in which all the chambers of the heart contract and relax once is called cardiac cycle.

Double circulation: In the human heart, blood passes through the heart twice in one cardiac cycle. This type of circulation is called double circulation. It ensures complete segregation of oxygenated and deoxygenated blood which is necessary for optimum energy production in warm-blooded animals.

Note - Since ventricles have to pump blood into various organs, they have thicker muscular walls than that of atria.

Blood Vessels: Blood vessels carry blood all through the human body. There are three types of blood vessels:

(iii) Capillaries - site of gaseous exchange between blood and cells.

Bleeding: It refers to the leakage of blood when a blood vessel ruptures. Bleeding is stopped by the platelets that help in clotting of blood at the site of the injury. 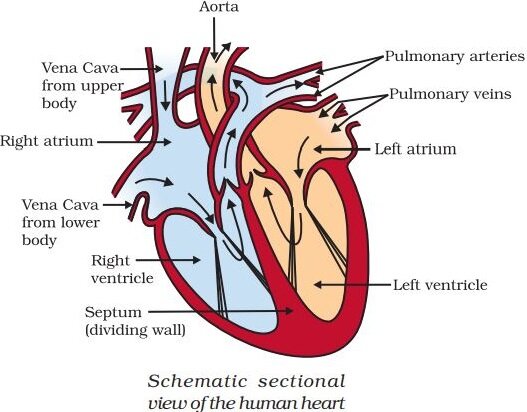 (i) Xylem: It is responsible for transportation of water and minerals from roots to the different parts of the plant. Xylem tissue consists of vessels and tracheids.

(ii) Phloem: It is responsible for transportation of food  from the leaves to different parts of the plants.

Transpiration: Loss of water in the form of water vapour from the aerial parts of the plant is known as transpiration. It helps in the absorption and upward movement of water and minerals dissolved in it from roots to the leaves.

Excretion: The biological process involved in the removal of harmful metabolic wastes from the body is called excretion.

Excretory system of humans consists of a pair of kidneys, a pair of ureters, urinary bladder and urethra. 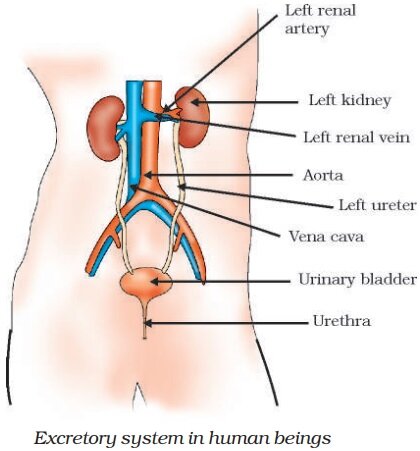 ➡ Urine produced in the kidneys passes through the ureters and gets collected in the urinary bladder from where it is expelled out through urethra as and when required.

➡ The basic filtration unit of the kidneys is known as nephrons.

➡ Nephron is the structural and functional unit of kidney. 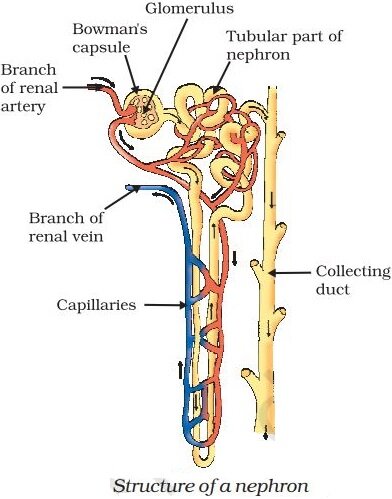 ➡ Each nephron consists of two parts- glomerulus and renal tubule.

➡ Glomerulus consists of a bunch of capillaries.

➡ The renal tubule starts with a cup-like structure called Bowman’s capsule that encloses the glomerulus.

➡ Capillaries of kidneys filter the blood and the essential substances like glucose, amino acids, salts, and the required amount of water are reabsorbed.

➡ Amount of water reabsorbed depends on how much water is there in the body.

➡ Excess water and nitrogenous waste in humans are converted to urine.

➡ Urine thus produced is passed to the urinary bladder via the ureters.

➡ Ureter is a tube emerging from the median surface of each kidney and connects the kidney to the urinary bladder.

➡ Urinary bladder is a muscular bag which is meant for temporary storage of urine and connects to urethra from where urine is discharged.

Any failure in the kidney activity leads to accumulation of poisonous wastes in the body, which can even lead to death. In such situation, an artificial kidney can be used. An artificial kidney is a device to remove nitrogenous waste products from the blood through dialysis. Artificial kidneys contain a number of tubes with a semi-permeable lining, suspended in a tank filled with dialysing fluid. This fluid has the same osmotic pressure as blood, except that it is devoid of nitrogenous wastes. The patient’s blood is passed through these tubes. During this passage, the waste products from the blood pass into dialysing fluid by diffusion. The purified blood is pumped back into the patient.

➡ Excretion of gaseous waste in plants takes place through stomatal pores on leaves.

➡ Excess water is excreted by transpiration.

➡ Waste products may be stored in leaves that fall off.

➡ Other waste products are stored as resins and gums, especially in old xylem.

➡ Plants also excrete some waste substances into the soil around them.

Q. Why is diffusion insufficuent to meet the oxygen requirements of multicellular organisms like humans?

Q. In mammals and birds why is it necessary to separate oxygenated and deoxygenated blood?

Q. Mention the role of hydrochloric acid in stomach.

Q. Write the final product of digestion of protein.