Important MCQs (with Answers) for Class 12 Physics Board Exam 2020 (for Chapter 4 Moving Charges and Magnetism) are available here. These MCQs are Also useful for competitive exams like JEE Main, UPSEE, WBJEE.

CBSE Board Exams 2020 are going to start from 15th February. Here you will get important MCQs (with Answers) for Class 12 Physics - Chapter 4 Moving Charges and Magnetism. These questions are very important for the preparation of upcoming CBSE 12th Physics Board Exam 2020 & other competitive exams like JEE Main 2020, WBJEE, UPSEE etc. In this article, you will also get links to access some very important articles for the preparation of upcoming CBSE Board Exam 2020.

Q1. 50 cm long solenoid has a radius of 1 cm and is made up of 500 turns. If it carries a current of 5 A then, find the magnitude of magnetic field inside the solenoid.

Here, l>>r, magnetic field induction at a point inside the long solenoid is given by:

The force on electron is given by: 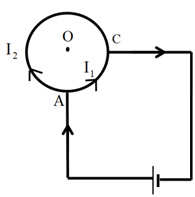 Labeling the figure as shown below: 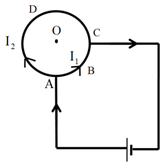 The resistance of the portion ABC will be, R1 = l1ρ.

The resistance of the portion ADC will be, R2 = l2ρ.

LetI1 and I2 be the currents in ABC and ADC respectively. As these parts are in parallel, therefore the potential difference across their ends will be same

From Biot-Savart’s law, the magnetic field induction at the centre O due to current through circular conductors ABC and ADC is

By right hand rule, the directions of B1 and B2 are opposite to each other. ∴ the resultant magnetic field at O will be zero.

Q4. A long solid steel pipe carries a 5 ampere direct current. The magnetic field associated with the current will be

(a) only inside the pipe

(b) only outside the pipe

(c) neither inside nor outside the pipe

(d) both inside and outside the pipe

For a point inside the pipe the current threading the closed path is zero.

Q5. An electron and proton having equal linear momentum enter in a uniform magnetic field normal to the lines of force. If the radii of circular paths are reand rprespectively, then re/rpis:

Q6. If a particle is moving in a uniform magnetic field, then

(a) its momentum changes but total energy remains same

(b) both momentum and total energy remains the same

(d) both momentum and total energy will change

Q7. A length of wire carries a steady current. It is bent first to form a circular plane coil of one turn. The same length is now bent more sharply to give a double loop of smaller radius. The magnetic field produced at the centre produced by same current is:

(b) a half of its initial value

(c) a quarter of its initial value

Magnetic field at the centre of n turn circular coil carrying a current i, radius r will be,

When coil has turns n1 and radius r1 then

Q8. A conductor carrying a current i is shown in the figure given below. The magnetic induction at the centre O is:

Q9. To convert a galvanometer into an ammeter, we connect

(a) high resistance in series

(b) high resistance in parallel

In order to convert a Galvanometer into an Ammeter, a very low resistance known as "shunt" resistance is connected in parallel to Galvanometer. Value of shunt is so adjusted that most of the current passes through the shunt.

Q10. Two similar conductors carrying same amount of current are placed as shown in the figure given below. The plane on one conductor is along x-axis and other is along y-axis. What is the ratio of resultant magnetic field at a common point to the individual magnetic field? 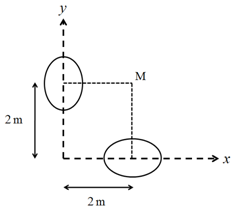 Let the radius of coil be a and distance from the centre of the coil is x and i be the current in each coil.

The magnetic field due to both the coil at point M will be same and act perpendicular to each other. Therefore the resultant magnetic field at the point is: