CBSE class 12 Physics chapter wise notes (or key notes) Part – 2 on chapter Alternating Current are available in this article. These key notes are important & very helpful for revision purpose before the CBSE board exam.

The key notes are given below:

For a series LCR circuit driven by voltage V = Vm sin ω t, the current is given by I = Im sin (ω t ‒ ϕ). Here we make an assumption that XL > XC 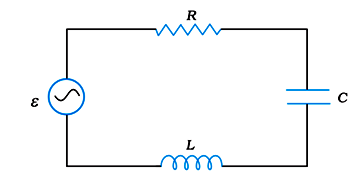 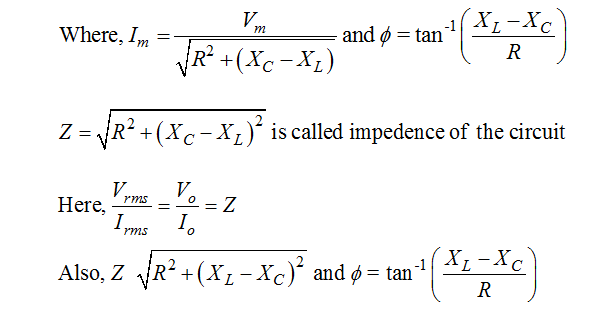 Above relation is graphically shown in the figure given below 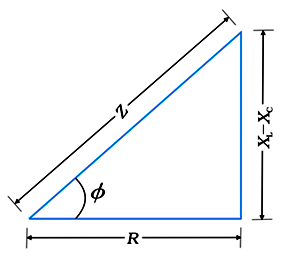 Here, e.m.f. is leading the current by phase angle ϕ and Z is called impedance of the circuit and is measure in ohm.

If XC > XL, ϕ is + ve and the circuit is predominantly capacitive. Consequently, the current in the circuit leads the source voltage.

If XC < XL, ϕ is ‒ ve and the circuit is predominantly inductive. Consequently, the current in the circuit lags the source voltage.

Resonance in a Series LCR Circuit

A series RLC circuit exhibit the phenomenon of resonance. The circuit is said to be in resonance at a frequency fr called resonant frequency at which XL = XC.

A given series RLC circuit is

• The root mean square value of current in the circuit is maximum and is equal to Vrms/R.

• The applied voltage and the current are in phase.

• The power dissipation in the circuit is maximum.

In a series RLC circuit, the quality factor (Q) measures sharpness of resonance.

The average power loss over a complete cycle is given by, Pav = Vrms Irms cos ϕ

ϕ is also equal to 0o for a purely resistive circuit.

For a purely inductive or a purely capacitive circuit, ϕ = 90o and Pav = 0.

Range of power factor for an AC circuit lies between 0 and 1.

If an electric circuit contains either inductance only or capacitance only, then the phase difference ϕ between current and voltage is 90o. The average power dissipated in such circuits is zero.

An inductor and a capacitor can store magnetic energy and electrical energy respectively.

If a capacitor (initially charged) is connected to an inductor then, the charge on the capacitor and the current in the circuit exhibit the phenomenon of electrical oscillations similar to oscillations in mechanical systems. 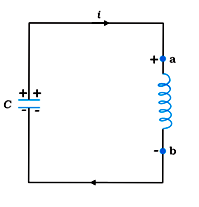