In this article, students will get revision notes on CBSE Class 12 Physics, Chapter 1: Electric Charges and Fields. These notes are very useful for revision purposes before the exam.

The complete chapter is divided into several parts and this is the Part - I.

Electrostatics deals with the study of forces, fields and potentials arising from static charges. The name electricity is coined from the Greek word elektron meaning amber.

The name electricity is coined from the Greek word elektron meaning amber.

There are two kinds of charges.

If we say that a body is charged, it means body have excess or deficit of electrons.

In solids, some of the electrons, being less tightly bound in the atom, are the charges which are transferred from one body to the other. A body can thus be charged positively by losing some of its electrons. Similarly, a body can be charged negatively by gaining electrons.

The SI unit of electric charge is coulomb. The c.g.s. unit of charge is stat coulomb. 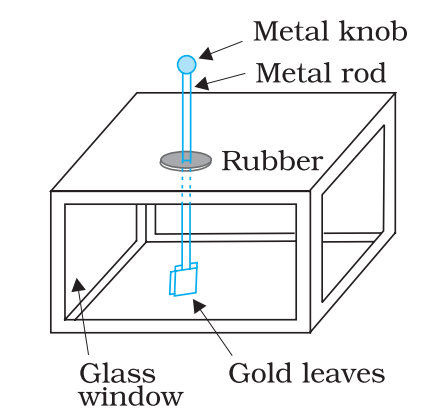 It is a device used to detect the nature and amount of electric charge present in a charged body.

It consists of a vertical metal rod housed in a box, with two thin gold leaves attached to its bottom end. When a charged object touches the metal knob at the top of the rod, charge flows on to the leaves and they diverge. The degree of divergance is an indicator of the amount of charge.

If a system contains two point charges q1 and q2, the total charge of the system is obtained simply by adding algebraically q1 and q2 , i.e., charges add up like real numbers or they are scalars like the mass of a body.

Within an isolated system consisting of many charged bodies, due to interactions among the bodies, charges may get redistributed but it is found that the total charge of the isolated system is always conserved.

Experimentally it is established that all free charges are integral multiples of a basic unit of charge denoted by e. Thus charge q on a body is always given by q = n e, here n is any integer, positive or negative. This basic unit of charge is the charge that an electron or proton carries. By convention, the charge on an electron is taken to be negative; therefore charge on an electron is written as –e and that on a proton as +e. (e = 1.602192 × 10–19 C)

A body can be charged by friction, induction and conduction.

When certain insulators are rubbed with cloth or fur, they become electrically charged due to the transfer or charge or electrons. As the two objects are rubbed together, one object loses electrons while the other gains electrons.

Induction is the process by which a uncharged body is charged by using a charged body without actual contact between them or losing its own
charge.

Afterwards, the neutral body is earthed and the like charge is neutralised by the flow of charge from earth leaving unlike charge on
the body. Now the earthing and the charging body are removed leaving the initially neutral body charged.

In the process of charging by conduction, direct contact of charged and uncharged body is involved and both objects acquire the same kind of charge. If a negative object is used to charge a neutral object, then both objects become charged negatively and vice versa.

The magnitude of Coulomb's law is given by the expression:

Where, F is the force between two point charges, q1 and q2 are magnitude of charges, r is the distance between these charges.

Some facts about Coulomb’s law:

•   Coulomb's law should be used for point charges in vacuum at rest. It is not valid for charges in motion.

•   The electrostatics force acts along the line joining the two charges. It obeys Newton's third law of motion.

•   Coulomb's force is not affected by the presence of other charges in the neighborhood; hence, the principle of superposition is valid. 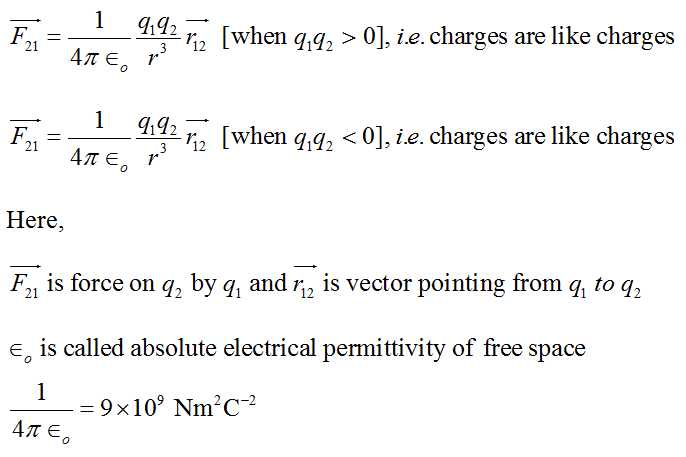 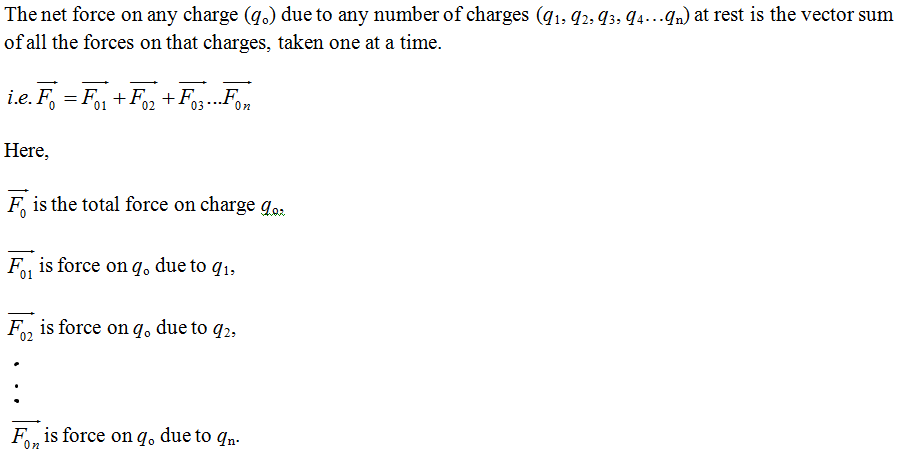