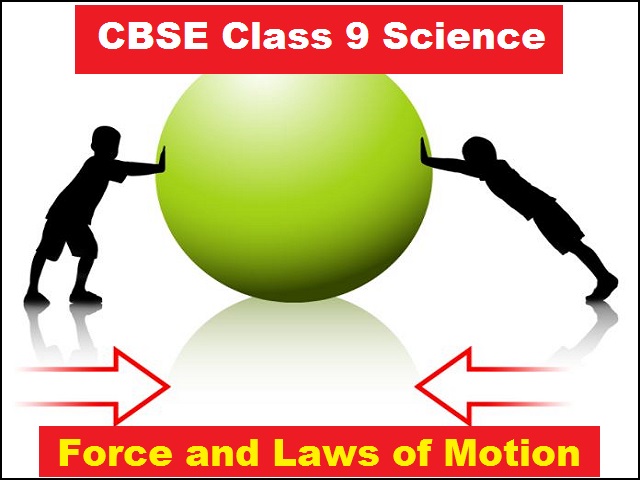 CBSE Class 9 Science extra questions for Chapter 9 - Force and Laws of Motion are prepared to cover all the key concepts involved in the chapter. These questions can be practiced as a mock test to make get an idea about your knowledge and understanding of the concepts. This will help you make preparations for your exams in an effective manner. You can read and download all the questions and answers and attempt them at your convenience.

1. What is the necessary condition to change the shape or position of an object?

Application of force is necessary to change the shape or position of an object.

2. Which of the following two types of forces will bring the motion in an object?

3. Why are safety belts provided in vehicles?

When we are sitting in a moving vehicle our body is also in the state of motion. But when the vehicle stops car stops abruptly on the application of brakes or on colliding with some other vehicle, our body tends to remain in motion due to its inertia. This may cause injury to us by hitting with the panels in front. Safety belt is worn to prevent such accidents as it exerts an unbalanced force on our body to make the forward motion slower.

4. Which of the following is a measure of inertia?

(a) Velocity of an object

(b) Mass of an object

(c) Volume of an object

5. Why does a boat move backward when a man jumps out of it?

This is due to Newton's third law of motion which states that for every action, there is an equal and opposite reaction. As the man jumps forward, the force on the boat moves it backward.

One Newton is defined as the force that is required to accelerate a mass of 1kg by 1m/s2 in the direction of applied force. It is the SI unit of force.

Newton's second law of motion can be mathematically expressed as follows:

8. When we kick a football it flies high but a stone of the same size hardly moves a distance on kicking with the same force. Why?

The mass of a body is a measure of its inertia. It means that larger the mass of a body, larger will be the inertia offered by the body to change its state of motion. Now as the football has a mass larger than that of the football, it resists a change in its motion better than the football. This is the reason that it will move hardly on kicking.

9. Calculate the force exerted by the brakes on the motorcar which is moving with a velocity of 72 km/h and takes 5 s to stop after the application of brakes. Mass of the motorcar along with the passengers is 800 kg.

You may download all the above questions and answers in PDF from the link given below:

Students must go through the latest CBSE Syllabus for Class 9 Science so that they can prepare according to the contents prescribed by the board.