In this article you will get the clue that from where and how the questions are being framed from the chapter Control and coordination
The experts of jagranjosh.com have full confidence that you will not miss any of the questions in the board exam as well as in competitive exams from this chapter if you will keep the following terms / question in your mind while studying 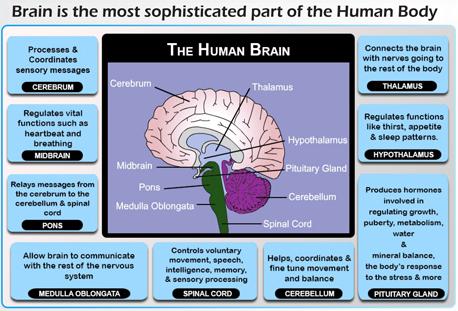 Medulla Oblongata: Allow brain to communicate with the rest of the nervoussystem

Some example questions are here

Q. Learning is related to
a. Hypothalamus
b. Thalamus
c. Cerebrum
d. Cerebellum

Q. Which of the following organs is not controlled by autonomous nervous system ?
a. Heart
b. Uterus
c. Glands
d. Eyes

Q. The substance that triggers the fall of mature leaves and fruits from plants is due to
a. Auxin
b. Gibberellins
c. Abscissic acid
d. Cytokinin

Q.Which of the following statements are true about brain?
i. The main thinking part of brain is hind brain
ii. Centers of hearing, smell, memory, sight etc. are located in fore brain
iii. Involuntary actions like salivation, vomiting, blood pressure are controlled by the medulla in the hind brain
iv. Cerebellum does not control posture and balance of the body

Q.Which two organs are connected by pons with the help of transverse band of nerves?
a. Nerves of brain and spinal cord
b. Both the cerebral hemispheres
c. Cerebellum and central nervous system
d. Sympathetic and parasympathetic