Importance of International Current Affair can be seen in the Previous Year Question Paper of UPSC IAS Exam. Here we provide the latest G20 Summit 2016 details and India’s Perspective

Importance of International Current Affair can be seen  in the Previous Year Question Paper of UPSC IAS Exam. Here we provide the latest G20 Summit 2016 details and India’s Perspective.

It is very well evident that India’s role in world trade and politics is dynamically increasing given its consistent economic growth. Hence all the relevant topics of Global Current affairs should be prepared in-depth having an analytical approach towards the subject. A good command on international affairs is necessary for both UPSC IAS Prelims and Mains.

G20 or group of twenty is an international forum of the Heads of States of 19 leading industrialized economies and the EU for international cooperation on global economic and financial issues. The group comprises of two-thirds of world’s population and 85 per cent of world’s GDP.

•    Ensuring international policy cooperation in a comprehensive manner that is in sync with the contextual business cycles of state.

•    Strengthening the international financial architecture system in an era of globalization to prevent a global financial crisis or depression to take place.

Since introduction of globalization and liberalization policies in 1991, India has increasingly integrated with the rest of the world and plays an important role in maintaining global economic balance. At the same time adverse developments like global financial crisis and euro zone crisis impact India's growth prospect significantly.
On the forum of G20, India have voiced it’s concerns regarding rebalancing global governance by reforming Quota system in global financial institutions, reframing of global tax structure to combat money Laundering, widening of G20 agenda to include development issues, and monitoring global economic trade imbalances etc.

Before 2008, G20 meetings consisted of Finance Ministers and Central Bank Governors of member states.G20 rose to prominence during the global finance crisis of 2008 and now it is the premier forum for international economic cooperation.
G20 presidency is selected on a rotational basis among the regional groups of member countries and one member from a group is selected as host for a specific year. The grouping is as follows:

For example: China is selected from group 5 to be the host for G20 summit 2016.
The Presidency of G20 invites non-member countries and institutions to attend the Leaders' summit. Invitation is extended to give voice to certain global concerns and an equitable geographical representation to non-members. Countries presiding over regional forums are invited such as ASEAN, African Union etc.

Map of all the countries who attended the G20 summit 2016: 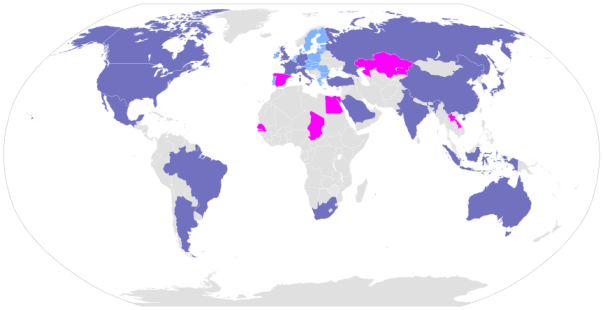 Purple-->Represents the member countries of G20

Theme: “TOWARDS AN INNOVATIVE, INVIGORATED, INTERCONNECTED AND INCLUSIVE WORLD ECONOMY”

1. Excess capacity in industrial sector (especially steel industry) was recognized as a global issue. It imposes trade related problems, one of them being faulty practice of dumping cheap steel imports into domestic markets of growing economies.

-->Indian economy was also hampered by excess steel capacity in China resulting in a flood of cheap imports in market. So, India strongly voiced in favor of anti-dumping duties.

2. Support for modern and integrated tax system was reiterated. Leaders called for a widespread implementation of base erosion and profit sharing framework formed by joined efforts of G20 and OECD.

-->India being one of the pioneers in anti-corruption campaign strongly welcomed this move and called for a more effective and efficient global financial and monetary governance. It also proposes elimination of safe heavens for tax evasion offenders.

4.To stimulate trade growth, all member countries will make efforts to rectify the WTO Trade Facilitation Agreement by the given deadline of December 2016.To accelerate efforts to reduce carbon emissions, strong momentum on climate action was maintained. With US and China ratifying the Paris agreement, the fight against global warming was strengthened.

-->India’s role in climate change fight has been instrumental .India is the founding member to International Solar Alliance to support clean energy efficiency and it is one of the first countries to integrate the Intended Nationally Determined Contributions in its global agenda.

5.Additional efforts to achieve the common goal of strong, sustainable, balanced, and inclusive growth were to be made :

-->To encourage a integrated digital economic system by emphasizing on free flow of data, internet access and cyber security.

Way ahead for India:

India being an emerging transitional economy has a proactive role to play in all the international forums including G20.India is an important partner in global cooperation to eliminate issues plaguing the world economy today.
Using the platform of G20, India can easily give voice to its most critical global concerns like