How does an IAS officer gets dismissed?

IAS officers have one of the most prestigious jobs in all India services as he is entrusted with the Policy formulation and implementation of the country. In the following article, we have tried to decode the recent debate on the review of service rules on dismissal and suspension of IAS officers on the grounds of incompetence and non-performance. 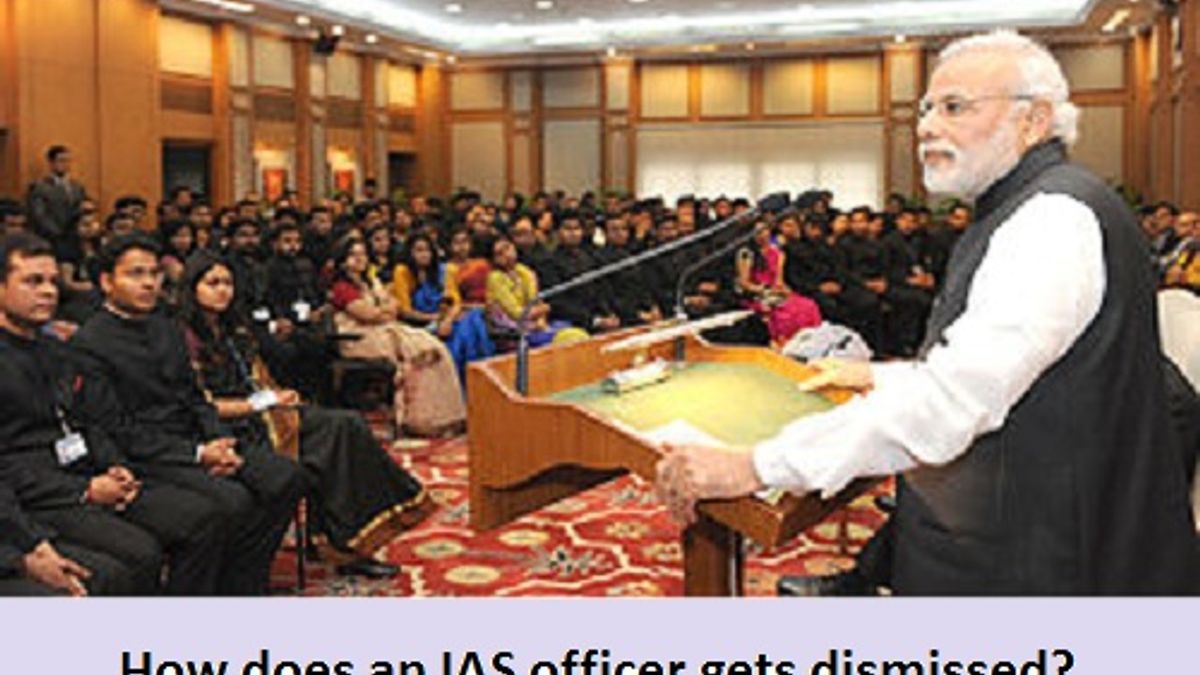 Dismissal of an IAS officer

IAS officers are consider as the pillar of the Indian executive system. They are entrusted with policy implementation at the grassroot levels which are the most challenging part of a democratic political system. Hence, it is an IAS officer, who contributes in both schemes/policy formulation as well as in policy implementation.

But in recent times, there has been the incidence of incompetence and non-performance among the IAS and IPS officers and the government is trying to review the suspension and dismissal policy of the all India service rule. Therefore, the government of India decided to review age old civil services system and update the redundant rules in the service rules to make the IAS officers more adaptable to the latest requirements of the government needs.

Typically the functions of an IAS officer are to implement government policies at the grass-root level when posted at field work i.e. as SDM, ADM, DM and Divisional Commissioner and act as an intermediate between public and government and to handle the daily affairs of the government.

2015- The Government of India reported that as many as 100 IAS officers have been in the list of corrupt bureaucrats and have come under the CBI reports for alleged involvement in corruption cases. Moreover, as per Government of India records, over 1,800 IAS officers deliberately failed to submit details of their immovable assets to the federal government for the year 2016. Recently, several Chief Secretaries and Principal Secretaries were arrested in graft and money laundering cases. IAS officers have been found shocking disproportionate assets and wealth varying up to US$31 million at times.

2016 - It was reported that Government of India has decided to empower common man to seek prosecution of corrupt IAS officers. Ministry of Personnel, Public Grievances and Pensions (DoPT) has accepted to receive requests from private persons seeking sanction for prosecution in respect of IAS officers without any proper proposal and supporting documents.

2017- A former Secretary to Government of India and few other IAS officers were sentenced to jail for the coal allocation scam by a CBI special court in Delhi. It was reported by Ministry of Personnel, Public Grievances and Pensions that 24 officers from IAS along with 381 Group A Service officers had been premature retired and granted cut in remuneration. In recent years, the Appointments Committee of the Cabinet has dismissed few IAS officers for non-performance.

Moreover, no such person as aforesaid shall be dismissed or removed or reduced in rank except after an inquiry in which he has been informed of the charges against him and given a reasonable opportunity of being heard in respect of those charges.

Generally, the opportunity before an employee getting dismissed will be available twice - at the inquiry stage and later at dismissal stage. However, this was changed by way of Constitutional (42nd Amendment Act, 1976 wherein, after inquiry, a punishment amongst dismissal, removal or reduction of rank will be given on the basis of evidence obtained during the inquiry.

'Dismissal' bars the person from further employment. 'Removal' allows the person to seek further employment. Provisions of Indian Evidence Act, 1872, Code of Civil Procedure, 1908 or Code of Criminal Procedure, 1973 do not apply to the departmental inquiry and compulsory retirement is not punitive action. No protection under this Article will be available in cases of compulsory retirement. Compulsory retirement does not involve any penal consequences and all his past pays will be paid.
Protection under Article 311(2) is available for both permanent and temporary Government servants.

The government are taking several steps to remove deadwood and inefficient officials in the Central Civil Services/All India Services. To make bureaucracy performance-oriented and accountable, the government has recently issued instructions to all ministries/departments to carry out a periodical review under FR 56(j) of Rule 48 of CCS (Pension Rules, 1972) and under Rule 16(3) of All India Services (Death-cum-Retirement Benefits) Rules.

As per these instructions, the performance of government servants should be reviewed six months before he/she attains the age of 50/55 years or on completion of 30 years of qualifying service, as the case may be, to determine if he/she should be retained in service or retired from service in public interest.

The Department of Personnel and Training (DoPT) had issued an office memorandum eliciting information pertaining to disciplinary cases in a standardized format, for its monitoring.

The government also issued instructions under Rule 7(2) of the AIS (Leave) Rules 1955 to process deemed resignation of bureaucrats who remain unauthorised absent after expiry of leave/study leave/foreign assignment etc.

The government has instructed all ministries/departments for time-bound submission of proposals to the cadre controlling authority for initiating disciplinary proceedings against IAS officers. In all civil service cadres, an officer will be allowed to defend himself while the procedures of dismissing are going on. The Government of India has so far dismissed, removed or compulsorily retired 13 bureaucrats and imposed pension cut on 45 others for unsatisfactory performance and delivery in public service.

Famous cases of dismissal under article 311 are as follows:

•State of UP vs A N Singh, AIR 1965- The Supreme Court ruled that for an employee to be a civil servant there should be a master-slave relationship between the State and the employee and employees of Statutory Corporations registered under Companies Act, 1956 are not civil servants.

•Mahesh vs State of UP, AIR 1955- The Supreme Court ruled that dismissal by an officer of the same rank is valid

Performance Appraisal of an IPS

Recent Events of Suspension and dismissal of IAS officers:

•In 2015, Madhya Pradesh cadre IAS couple Arvind Joshi and Tinoo Joshi were dismissed from the service as they were charged with corruption.

•A Kerala cadre IAS officer MP Joseph, who took long leave from the state govt. service for an abroad assignment with ILO was later denied from assuming the office of state govt. service on the ground that-a continuous absence of 5 yrs from office is equivalent to resignation.

•Under Rule 16 (3) of All India Services (Death-Cum-Retirement Benefits) Rules-1958, the central government can retire in public service an officer of all India services (Indian Administrative Service, Indian Police Service and Indian Forest Service) after giving him or her at least three months previous notice in writing or three months pay and allowances.

IAS officer functioning also includes framing and implementation of policy in consultation with the minister-in-charge of the concerned ministry which requires supervision and proper enforcement at ground realities.

Moreover, not even a month ago the ministry has taken actions like premature retirement and cut in remuneration against 381 civil services officers, including 24 from the Indian Administrative Service (IAS) officers, for being non-performers and allegedly being involved in illegal activities.