Flaming ahead by being a part of history

2021 marks the 50th anniversary of the War of Liberation, which is also known as the War of Bangladesh independence. 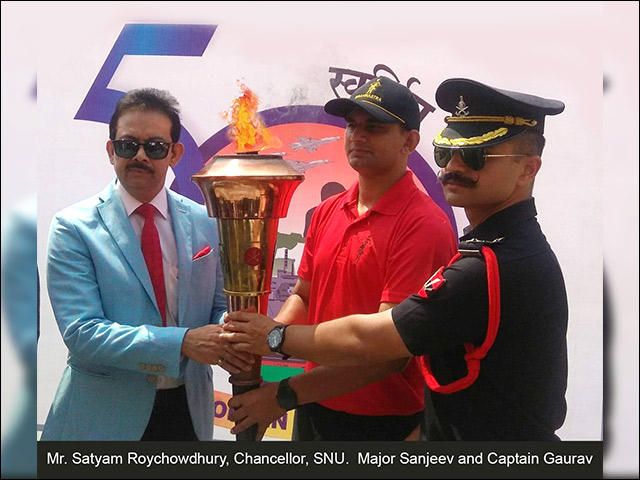 Flaming ahead by being a part of history

2021 marks the 50th anniversary of the War of Liberation, which is also known as the War of Bangladesh independence.

To mark this historic event, Victory Flame was lit by the Hon’ble Prime Minister, Shri Narendra Modi on 16th December, 2020 from the existing eternal flame in New Delhi.

Since then, four Victory Mashaals have been travelling through different battle fields of the Liberation War.

This will continue till 16th December, 2021 to mark the Swarnim Vijay Varsh.

After the arrival of the officers from the Army, Navy and Air Force, the Victory Flame was handed over to the SNU Chancellor, Mr Satyam Roychowdhury, to be placed on the university campus.

Spearheaded by Capt. Prabhakar, the Assam Regimental Band’s performance was in full glory. Dressed in pristine whites, the band’s performance infused a feeling of pride and patriotism among everyone present.

In his welcome address, Mr Roychowdhury thanked the Armed Forces for choosing SNU as one of the venues of this Victory Flame. “It’s a matter of great pride and joy,” he said.

Ever since it had been lit on Vijay Diwas last year (16th December, 2020), the flame has travelled to various parts of the country, including Kolkata, where Hon’ble Governor Jagdeep Dhankhar received the Flame on 10th March.

SNU Vice-Chancellor Prof. Dhrubajyoti Chattopadhyay, said “We feel so proud to be a part of this celebration,” he said. 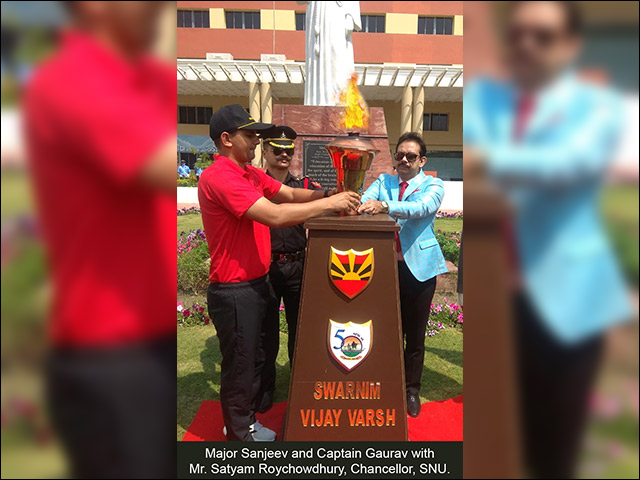 Maj. Gaurav Lohomia introduced a film which showcased how the War of 1971 was fought and won – from the rigorous training of ‘Mukti Bahini’ members by Indian Armed Forces to then Prime Minister Indira Gandhi asking Gen. Sam Maneckshaw to go to East Pakistan and force the Pakistani soldiers to surrender. It was captivating!

The film, which has been made by the Indian Army, also highlighted the plight of people under then West Pakistan’s rule, the vital role played by Sheikh Mujibur Rahman and the indomitable spirit of the people of Bangladesh.

Maj. Sanjiv Singh who is in charge of the travelling Vijay Mashaal recalled how he first lifted it on 1st March, 2021 in Ranchi. Since then it has travelled through Bihar to Kharagpur and today to Sister Nivedita University.

Later, the Nursing students of SNU and the students of the engineering department of Techno International New Town enthralled the audience with their selection of patriotic songs which started off with the National Anthem of Bangladesh.

The ceremony (inside the auditorium) ended with a vote of thanks delivered by SNU Registrar, Prof. Suman Chatterjee.

“The historic victory of the 1971 War was a saga of indomitable courage, valour and sacrifice which resulted in the making of a new nation, Bangladesh”, said Mr Biplab Ganguly, a Techno India Group senior official.

The event concluded with the Army band playing the Indian National Anthem. The flame will travel today at 16:00 hours to Science City from Sister Nivedita University.

Disclaimer: The information provided in this Notification is solely by Sister Nivedita University. Jagranjosh.com bears no representations or warranties of any kind, express or implied, about the completeness, accuracy, reliability, suitability or availability with respect to the information. Individuals are therefore suggested to check the authenticity of the information.