Hindu College (DU) to begin admission from August onwards. The aspirants seeking admission to various courses offered by the top college are advised to read the admission process, course fee, and facilities available on the campus of Hindu college. 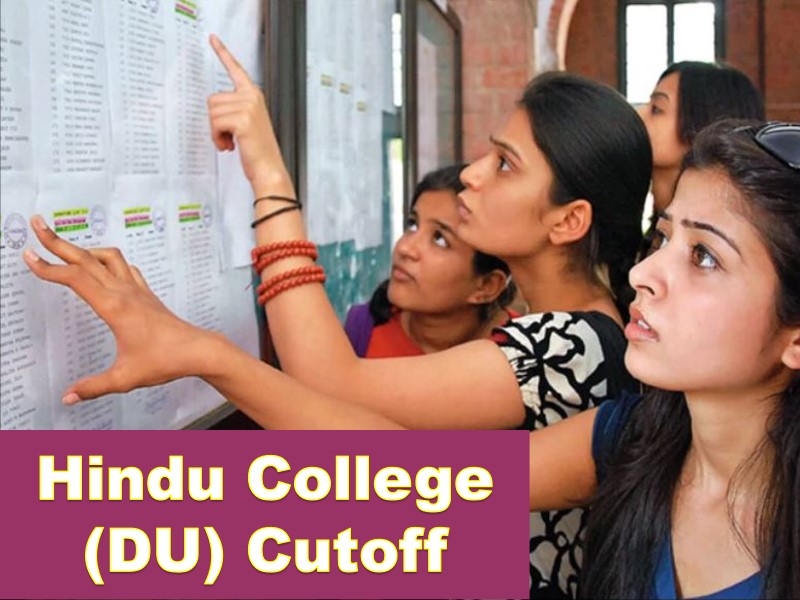 Hindu College Cut Off 2021: The DU admission season has arrived with the registration window getting open from 2nd August 2021 onwards. Candidates can apply for the Hindu College online through the DU Admission portal. In this article you will find out complete details about the Hindu college cutoff for top courses and all the other cut-off followed thereafter. Candidates can also visit the official website of the University of Delhi to find out the course-wise cut off of Hindu college or can click on the direct link here.

(Direct Link - To be Activated)

Take a sneak peek into the cut-off 2019 DU for popular courses offered by Hindu college.

Check the first cut-off 2019 for the popular courses at Hindu Colleges.

Candidates can compare the previous five years cut-offs of Hindu college and also read about other important factors such as the Admission process, facilities available on the campus and the fee structure of various courses offered at Hindu college.

Here are the previous year cut-offs of Hindu College. Students can check and compare the  cut-off score for the

The first cut-off of Hindu college saw tough competition among the students seeking admission in the courses such as B.Com, B. Sc. (Hons.) Mathematics, and B.A. (Hons.) English, among other courses.

For most of the courses, the second cut-off generally closes. This is because the seats were full after the first cut-off was released. Especially for the B.A. programme, B.A. (Hons.) Economics, and B. Sc. (Hons.) Chemistry.

The third cut-off in 2019 has been a major disappointment for many aspirants because the seats in the top courses have already been booked and the cut-off were closed for admissions.

The fourth cut-off again gives the chance to the aspirants aiming for other courses in the domain of Arts, Science and Commerce. The seats in the general and OBC quota gets filled quickly across all the courses.

It can be seen in the cut-off that the fifth cut-off for categories and courses are released with a dip in the percentage so that more candidates are motivated to apply for the course and seats are filled in due time.

Once the cut-off list for DU admissions is announced by Hindu College, candidates seeking admission in the merit-based courses are required to rush to the college to apply for admission in desired course.

Carry relevant documents mentioned in the list of the Documentation process for getting admission. Once the documents being produced at the time of DU admission are approved by the teacher in-charge and the Principal of the Hindu college, candidates will receive a fee payment activated link on the DU admission dashboard.

Students of Hindu college have access to all the facilities mentioned below on the campus:

1. Hostel: Well furnished hostel with 119 rooms and a common room with recreational facilities

5. Bank: State Bank of India is located in the College premises

12. Girl's Common Room: It is equipped with a vending machine for feminine hygiene essentials.

Founded in the year 1899 by Late Shri Krishan Dassji Gurwale, Hindu College, one of the top colleges of North Delhi is always a dream for the aspirants hailing from various backgrounds. Be it an Arts, Commerce, or Science background student, Hindu college has some or the other popular course on the platter to offer to the students. Being ranked 3rd as per the National Institutional Ranking Framework (NIRF) Ranking 2021, aspirants targeting Hindu college often see the super high cut-off making it difficult for them each year to seek admission to the courses in high demand.

So this was all about Hindu College of The University of Delhi. To know more about DU Admission Eligibility Criteria 2021, stay tuned with Delhi University section of jagranjosh.com. and get all the latest updates without missing out on any important event!