How do the oysters form beautiful pearls?

In this article you will get to know the process working behind the formation of a pearl in an oyster’s shell.

Q. How do the oysters form beautiful pearls? 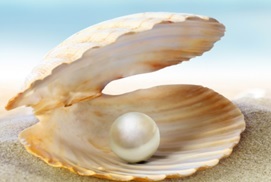 Ans. Pearls are actually formed as a result of the defensive mechanism followed by the oyster  to protect itself from foreign irritants that may injure its mantle tissue (a protective layer that covers the oyster's organs). When a threatening irritant such as a parasite or a grain of sand gets stuck between the oyster's shell and mantle, the oyster in a way to protect itself, quickly starts covering the irritant with the layers of a lustrous substance ‘nacre’ which is actually a mineral composed of a mixture of aragonite and conchiolin. This shiny substance coats the intruder and over the years forms a lustrous pearl out of it.