How to read The Hindu Newspaper

The significance of reading newspaper for IAS Exam has increased tremendously in past few years. Out of the many newspapers available in the market for UPSC Preparation, The Hindu stands out with its enormous and effective coverage of crucial issues. Here, we have tried to decode a unique strategy to study the Hindu. 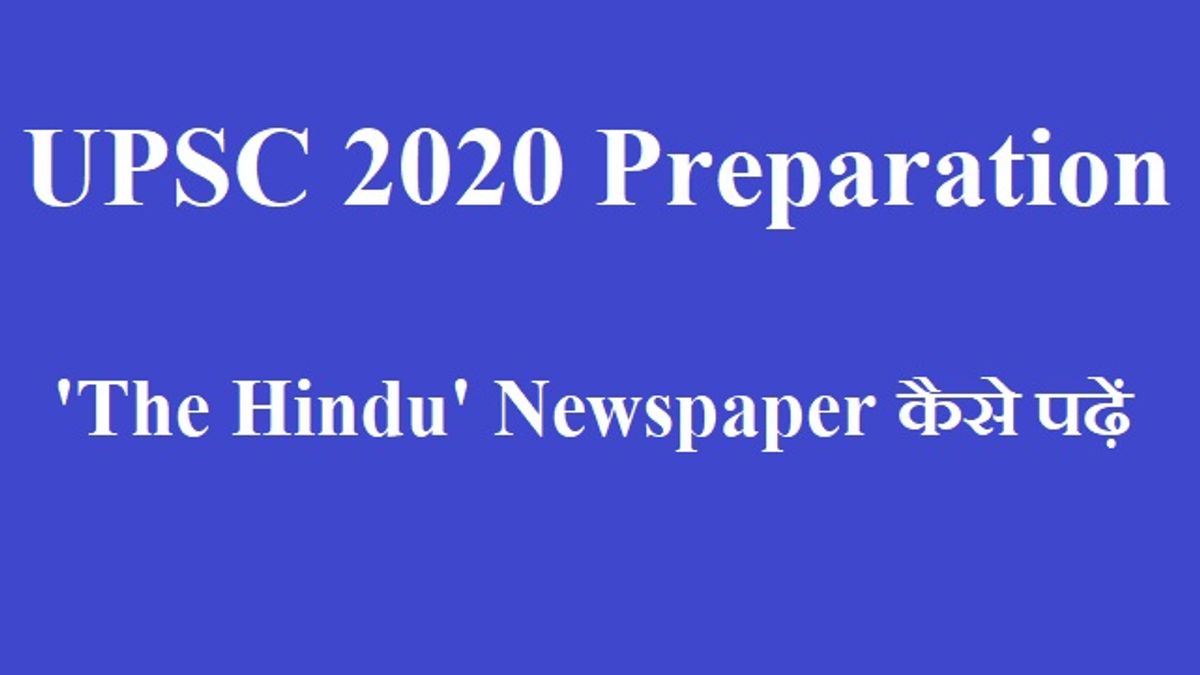 How to read The Hindu Newspaper for UPSC IAS Exam 2019

How to read the Hindu Newspaper is the first question, which is asked by the IAS aspirants. Reading the Hindu newspaper for IAS exam is imperative to get the best insights and critical analysis of government policies.  The editorial columns of the Hindu newspaper help immensely in the IAS Preparation because they have a very detailed and comprehensive approach to cover important topics for IAS Exam.

In addition to the National Issues, there are various special editions in the Hindu newspaper, which help in various subject topics such as Indian Economy, Science and Technology, Environment and Ecology and others.

The Hindu newspaper is known to act as a trademark for success in the IAS Exam. The Hindu is known for its unique coverage of all crucial issues in all dimensions and in its entirety. The Hindu's editorial page gives importance to varying opinions and hence provides news in a very holistic manner in relation to all perspectives like national, international science & technology etc.

The Hindu is rightly considered as the top source of knowledge and study material among UPSC aspirants as it requires a blend of static, plus dynamic awareness of an issue to completely examine a good editorial of the Hindu newspaper.

Once you are well settled with the fact that every aspirant needs to read the newspaper, the next question arises how to start or initiate with newspaper reading? Let’s start with some perquisites while starting with the Hindu every day:

How to study Geography for IAS Exam

The highest yielding portion of the Hindu newspaper is its everyday editorial page. Editorials and open editorial pages are the most informative sections of the Hindu and hence it should be dealt extensively. High yielding notes as per the IAS Exam perspective can be prepared from here. Try to pick up good introductory and summative lines on crucial issues from here; it can enhance the value of your answers exponentially.

How to prepare for IAS Exam with a full-time job?

The Hindu newspaper is known for its elegant views on events impacting the socio-political structure of the nation as some of the best columnists in the country writes for the Hindu newspaper.

It’s advisable to read this section every day and develop a habit to read the full editorial in one go to get an overview of all dimensions of the issue. To streamline your IAS preparation according to the current happenings, make profound notes from this section and update them every time a new editorial appears on the same issue.

Sections/Areas of focus in the everyday newspaper:

After the in-depth study of the Hindu editorial, move to the Business section for important updates in ratios and figures for prelims and guidelines or reforms in the economy for IAS Mains. It often comes with SEBI guidelines, RBI recommendations which can be noted to add factual value to your IAS Preparation.

Lastly, do a cursory reading of the national and international page to note only the topics or happenings frequently stated in the paper and then backtrack the issue to study it in detail from all perspectives.

One more vital know how is to identify where to focus within special editions and how to utilise it in coherence with the IAS preparation. Here, we have provided a table with all the sections to focus on while going through special edition sections and also how it will help you enhance your notes.

Time and now, many coaching institutes or even students have tried to substitute newspaper reading with some local study material, but it all lands down on the fact that there is no real substitute for standard sources be it a book or a national newspaper like the Hindu.

What you will gain while reading the first-hand news in the Hindu can never be replaced or even enhanced by any sources. So, try to be focused and loyal to the Hindu. It has proved to a game changer for many toppers and the same can be achieved by you.