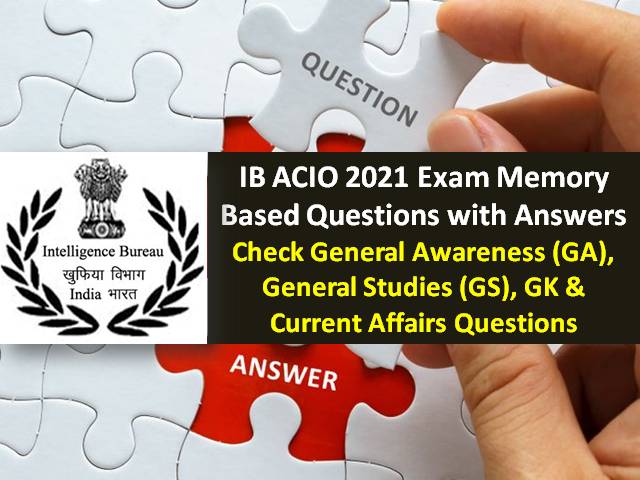 IB ACIO 2021 Exam Memory Based Questions with Answers (GA/GS/GK/Current Affairs): IB ACIO 2021 tier-1 Exam has been commenced from 18th February 2021 for the recruitment of 2000 Vacancies of Assistant Central Intelligence Officer, Grade-II/ Executive, i.e., ACIO-II/Executive in Intelligence Bureau, MHA, Government of India. In this article, we are going to share the important memory-based General Awareness, General Knowledge, and Current Affairs Questions as per the feedback received by the candidates who have appeared for IB ACIO 2021 Online Exam.

Candidates are advised to definitely cover these questions for scoring high marks in the Exam. Let’s have a look at the Important Questions that are being covered in the IB ACIO 2021 Exam:

2. RBI has recently cancelled license of which State Bank?

5. In which continent, volcano has not erupted yet?

Answer: Australia - Australia is the only continent without any current volcanic activity, but it hosts one of the world's largest extinct volcanoes, the Tweed Volcano.

6. Country with most active volcanoes:

8. Digested Food are absorbed in which body part?

9. Excess Vitamin A is accumulated in:

Answer: Excess vitamin A is stored in stellate cells in the liver

13. Members of Space Force Personnel formed by America will be called:

14. India’s first Diesel to Electric Converted Locomotive at Diesel Locomotive Works is in:

15. Indian Railways was founded in:

2. Who is the Governor of Meghalaya?

3. Rohit Sharma is related to which sport?

4. Geographical Indication (GI) tag given to:

5. Who was the King of France at the time of the French Revolution?

Answer: Bike ambulance named 'Rakshita' developed by the Institute of Nuclear Medicine and Allied Sciences (INMAS), a DRDO laboratory, for the Central Reserve Police Force (CRPF). 21 such bike ambulances were inducted into the CRPF. Rakshita is built on a Royal Enfield Classic 350CC.

Answer: Elon Musk's company SpaceX has successfully launched the Transporter-1 mission, breaking the record for the most number of satellites ever flown on a single rocket.

12. Who said England is known as Land of Merchant?

Answer: Acid rain, or acid deposition, is a broad term that includes any form of precipitation with acidic components, such as sulfuric or nitric acid that fall to the ground from the atmosphere in wet or dry forms.

17. WHO declare Africa free from which disease?

18. Keetham lake is in which State?

Answer:  Uttar Pradesh - Keetham lake, also known as the Sur Sarovar, is a scenic lake just outside Agra on the Agra.

19. PETA person of the year in India:

20. GST was an amendment to which section:

Answer: MAITREE-2019 will be the third consecutive army engagement between India and Thailand's forces.

Answer: The Strait of Gibraltar, also known as the Straits of Gibraltar, is a narrow strait that connects the Atlantic Ocean to the Mediterranean Sea and separates the Iberian Peninsula in Europe from Morocco in Africa.

23. Black Forest Range is in which country?

Answer: The Black Forest is a large forested mountain range in the state of Baden-Württemberg in southwest Germany.

26. Bandipur Fort is situated in:

Answer: Karnataka - Bandipur is located in Gundlupet taluk of Chamarajanagar district. It is about 80 kilometers (50 mi) from the city of Mysore on the route to a major tourist destination of Ooty.

27. Where is Bhagwati Fort situated?

31. Where is Barabati Fort?

32. Sericulture is related to?

33. Sahitya Akademi Award is given in how many languages?

34. Who is the author of the book Geetanjali?

36. An extraordinary Life: A biography of Manohar Parrikar” was written by?

37. 20th parallel line is between which country?