If you are appearing for CBSE Class 12th Board exams 2020, check this list of important questions and answers from Chapter 1 of Microeconomics.

CBSE Class 12th Economic exam is scheduled for 13th March 2020. In this article we have complied a list of important questions from Chapter 1 of Part B (Microeconomics): Introduction. Questions given below are important questions and are expected to be asked in Class 12 Economics board exam 2019-20.

Ques 1 In the given figure, the movement on the production possibility curve from point A to point B shows ________. (Choose the correct alternative) 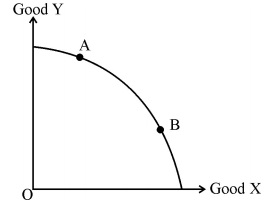 (a) Growth of all the resources in the economy.

(b) Underutilisation of resources.

Ques 2 Identify and discuss the nature of the following newspaper reports in terms of positive or normative economic analysis :

(i) “India jumped 23 points in the World Bank’s ease of doing business index to 77th place, highest in 2 years.” – The Economic Times

Solution: i) Positive statement – it deals with a real life situation, justifiable by facts.

ii) Normative statement- it deals with a situation as it ‘ought to be’.

Ques 5 A production possibility curve (PPC) would be concave to the origin if marginal opportunity cost is : (Choose the correct alternative) 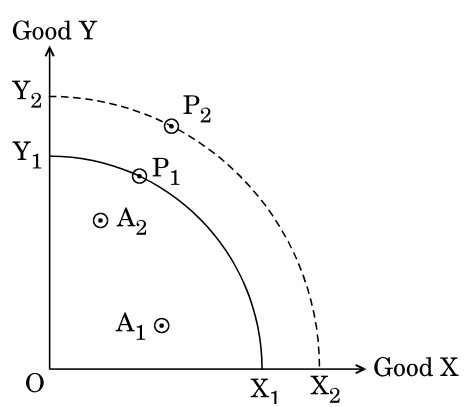 The change in potential production over the two periods would be represented by a shift from __________ . (Choose the correct alternative)

Ques 7‘‘Problem of resource allocation would not arise, if resources do not have alternative uses.’’ Defend or refute the statement with valid arguments.

Ques 8 Explain briefly the central problem of ‘‘What to produce’’.

Solution: The problem of ‘what to produce’ relates to the choice of goods for production. For example choice between capital goods and consumer goods, between war time goods and peace time goods and the like. The actual quantity of two possible goods would ultimately depend upon the market conditions of demand and supply for each of the goods.

Ques 9 Distinguish between a centrally planned economy and a market economy.

Solution: A market is a set of arrangements where economic agents can freely exchange their commodities or products with each other.