India and China are the two Asian powers in different phases of their Economic Development. Both the economies complement each other. But the increasing trade imbalance between India and China and the growing proximity of India with US is changing the way of discourse. Let us see the future of India China relations 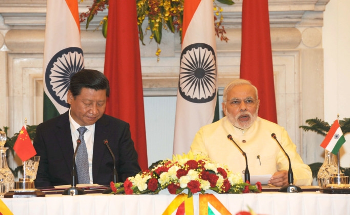 The two powerhouses of Asia have deep rooted continued civilisation and hence their relations are also very ancient. The association between these two countries, however, should better be discussed after their independence from foreign powers in the late fifth decade of the last century. Both these countries started on a very cordial note with the signing of Panchsheel.

However, the relation between India and China has remained cold since the war of 1962 and the mistrust between these two countries have been prevailing since then. China, economy has developed itself at a greater pace and has established as the new economic superpower on the world stage. However, it has failed miserably on human rights, democracy and social freedom. India, on the other hand, has managed to balance economic development with liberal human rights. Although it has not kept pace with China as far as economic prosperity is concerned, however, it has preserved its cultural diversity, secularism, democratic socialism and so on.

India and China have shown cooperation in BRICS, WTO, SCO, BCIM etc. These two countries have been engaged in vibrating trade and business. China is willing to invest heavily in Indian economy. India also wants to establish the lost cultural ties between the two countries. However, the deep-rooted mistrust, diplomacy and competition to emerge as superpowers have caused the persistence in the strained relationship between India and China. In spite of Modi's aggressive foreign policy agenda, as evident from a plethora of important leaders and visits from both countries, the relation between these countries have remained cold.

These two countries remain at loggerheads on a plethora of issues, such as Border disputes, China's support to Pakistan on various issues, China's obstruction in India's bid for NSG membership and permanent seat of the Security Council, huge trade imbalances, dumping of Chinese goods in India, India's support to Vietnam and so on.

During the various visits of the respective heads of states of India and China, following agreements have been made:

• China's pledge to invest in Railways, and help it to modernise.

• China has agreed to set up various industrial parks in Gujarat and Maharashtra.

• India has also been able to persuade China to give more and more market access to Indian products, including pharmaceuticals and farm products.

• Various Sister cities agreements have been signed between these two countries.

• In water resource management, Renewal of an agreement dealing with sharing hydrological data on Sutlej River was also signed.

Apart from these agreements, the cooperation between India and China have been evident on the following issues:

• China and India have represented the developing countries in climate change talks and have cooperated with each other to thwart any imposed by the west.

• The similar cooperation has also been well evident in the WTO, where India and China along with other developing countries have resisted West's aggression for trade and Intellectual Property Rights.

• Being a member of BRICS, these two countries have challenged the hegemony of OECD countries as evident from the establishment of the New Development Bank and Contingency Reserve Arrangement.

• India's inclusion in SCO also demonstrates China's acceptance for India to engage on a world platform.

However, in spite of all these agreements and co-operation, India and China are entangled with a plethora of issues as mentioned below:

China has shown its displeasure over the McMohan Line and has refused to consider this as the international boundary between India and China. China claims Aksai Chin and Arunachal Pradesh as its part and had been aggressively pursuing its policy in this regard. The current demarcation as LAC is temporary and settling the border has been a huge issue between these two Asian giants. Denial of Visa to residents of Arunachal Pradesh, PLA's incursion into India's territories etc. have become frequent by the Chinese.

China is aggressively pursuing its policy of regional dominance by its 'String of Pearls', One Belt One Road, Maritime Silk Road, Chinese Pakistan Economic Corridor and thereby trying to contain India. India has launched Project Mausam to fuel its aspirations.

India considers such treaties, as unfair and has therefore not signed it. China, in turn, has been trying hard to not let India become an NSG member, citing procedural complexities. NSG issue has become the most bitter aspect in India- China relation in recent times.

Although, India and China both have been suffering from the menace of terrorism. However, in a bid to support its ally Pakistan, China has failed to act aggressively on Terrorism. It has persistently disallowed India to corner Pakistan and ban the various terrorist organisation based in Pakistan.

Trade imbalance and its Future implications

Although the trade has been thriving between India and China as it has risen from $ 10 bn in 2004 to more than $70 bn currently, however, it is highly skewed in favour of China. The trade imbalance between India and China has persistently been growing and India's trade deficit with China has swelled to $52.68 billion in 2015-16, from $48.48 billion in the previous fiscal. In 2015-16 India exported a little over $9 billion worth of goods to China, while it imported goods worth $61.7 billion.

China has been one of the largest trading partners of India and such huge trade imbalances mean persistent Current Account Deficit for India, which the later cannot afford. Another concern for India is its inability to export high value and high technology goods. India has been exporting mainly raw materials and primary low-value goods to China, whereas India is importing high-end goods. This is not only limiting India's business prospect for the future, but also provides bleak chances for India to rectify its trade imbalances with China.

China, persistently being India's one of the largest trading partner; such huge trade imbalances exert huge Balance of Payment pressure for India. This also limits India's capacity to enhance trade with India, as the Current Account Deficit will keep on increasing. India can counter this by

• Putting pressure on China to give it market access for its service industries, farm products and pharmaceuticals, in which India has expertise

• Looking for alternatives to trade with, where India has better market access

• Aggressively, pursuing its 'make in India' plan so as to decrease manufacturing imports and at the same time enhance its high-value export capabilities.

• Applying Anti-dumping and Countervailing Duties on Chinese items on all the possible products within the legal gambit. Without going for such remedies, the trade imbalances with China may cost very dearly to India in the long run.

Implications on the Regional Leadership hopes of India

India has long hoped for the regional dominance in its vicinity and it truly deserves so in light of its economic, military and population might. India has persistently been helping its smaller neighbours in all needs diplomatically, financially, strategically or even militarily. Owing to the cultural uniformity and ancient connections, its neighbours aptly see India as the natural leader of South Asia and beyond. China, however, has played spoilsport on India's deep connection and cordial relations with the neighbourhood. Following countrywide brief description will further highlight the issue.

• Recent hard approach by China to Bhutan has alarmed India, as the China wants to establish diplomatic relation with Bhutan and has already constructed huge Buddha statue in the country.

• Nepal has been helped by China in its recent constitutional political crisis. China is connecting Nepal from Tibet and thereby increasing integration with it. China's persistent efforts to help Nepal may push the later away from India

• Bangladesh has been offered huge sums of money as loan as well as credit by China to develop its infrastructure. China is also trying to integrate Bangladesh with its BCIM initiative and thereby enhance its influence over India's eastern neighbour.

• Myanmar was helped by China in its Junta rule when almost all the world had been boycotting it. In turn, China has been exploiting Myanmar's precious stones and asserting its influence. Indian say in Myanmar is nowhere close to that of China

• Sri Lanka was considered very close to India culturally, politically and diplomatically. However, in LTTE era, some strained relations developed between India and Sri Lanka, which culminated into huge Chinese investment in Sri Lanka in and around areas of Hambantota Port. China has been curtailing India's influence on Sri Lanka over the years with its diplomatic and financial help. India has faced opposition due to its Tamil human rights support.

• In spite of the persistent help of India, Maldives, owing to its internal politics has been trying to move away from India and has been wooing China to counter India's presence in the country

• Pakistan has been India's enemy for long and hence it's obvious that India leadership will not be honoured by Pakistan. China's massive help to the country in terms of developing the Gwadar port and developing CPEC corridor has further enhanced Pakistan's allegiance to China.