India and US are the two largest democracies of the world. The growing proximity of India and USA in the recent times is the matter of concerns for some of our neighbours. The relation with the super power is very important for us in every aspect. Let us see how it is shaping in the recent times… 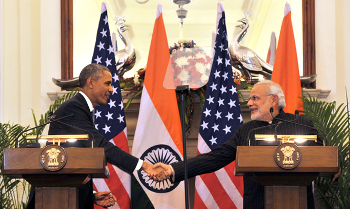 However, the present relation between these two diverse countries are intriguing as well as complex. The intriguing relations pertain mostly to political and cultural condidtions, whereas the difference in opinion mostly occur in the areas of trade, intellectual property rights, business, diplomatic rows and so on.

The new Indian Government has been very aggressive in the foreign policies and has the capabilities to take this warmth between these two countries to a new height. The two countries have to walk a tightrope in order to consolidate the trust and confidence they have accumulated hitherto for years. In the multipolar world, Indian interests mainly lies obtaining cutting edge technologies, expanding service industries, help in uprooting the menace of terrorism etc. At the same time, US wants to maintain its hegemony by containing China with the help of India, to have a large share of Indian market, to search for more and more strategic partners having similar interests etc.

On the lines of the active engagement policy with outside, PM Modi is specifically enthusiastic about India's relation with US, which is also evident in the form of his four visits within the span of two years. Various deals and agreements have been signed even during his last visits, which have been discussed below:

1. Terrorism has been a big menace, because of which India as well as US is suffering. Intelligence has been acting a persistent savior in containing terrorism, hence for the exchange of Terrorist Screening Information, recently an arrangement between the Terrorist Screening Center of the Government of the United States of America and the Multi-Agency Center/Intelligence Bureau of the Government of India was made. As per this cooperation, both countries have agreed to provide each other access to terrorism screening information through the designated contact points. However, such exchange of informations are subject to conformity to domestic laws and regulations. The Arrangement is all set to enhance the counter terrorism cooperation between India and the US, thereby tackling terrorism.

2. US and India also signed Memorandum of Understanding (MoU) to enhance mutual cooperation on energy and climate change. Energy security has been very critical to the world and the clean energy has become all the important amidst fast changing climatic conditions. Hence, sustainable development can be achieved by cooperation on clean energy through bilateral agreement and joint initiatives.

4. India and US have signed the Memorandum of Understanding (MoU)  for the Development of an International Expedited Traveler Initiative (the Global Entry Program). The Global Entry Program of US allows expedited clearance for pre-approved, low-risk travelers upon arrival in the United States. The approved frequent Indian travelers will be extended the facility of expedited entry into the United States through automatic kiosks at select airports.

5.  Indian Navy and the United States Navy have made technical arrangement concerning Unclassified Maritime Information Sharing. This would allow the sharing of unclassified information on White Shipping between India and the US as permitted by respective national laws, regulations and policies, and provides a framework for mutually beneficial maritime information.

6. Another Memorandum of Understanding (MoU) was signed between  two countries related to geology This MOU aims to increase the understanding of the geologic occurrence, distribution, and production of natural gas hydrates along the continental margin of India and in the US.

8. Agreements were also signed for the Logistics Exchange between the two countries to facilitate mutual logistic support between India and the US for authorized port visits, joint exercises, joint training and  humanitarian assistance and disaster relief (HA-DR).

The various benefits have been highlighted under the preceding subheading. Summarizing them, the main benefits of India signing the deals with US are follows:

With the change in the leadership in United States, it will be interesting to see that how India - US relations takes shape in the coming time. But as of Now the things are looking good as the new President of USA Donald Trump tweeted in favour of healthy relations with India.