Scientific and Technological developments are very crucial issues for the IAS prelims exam, especially in the nuclear energy sector. Hence, we provide India year book crux of science and technology chapter for the IAS Prelims Exam 2017.

India year book provides details of the most authentic government schemes and policies on the scientific and technological developments in the country, especially in the nuclear energy sector that can be directly asked in the IAS prelims exam.

• Front End Fuel Cycle comprises operations such as mining, milling and processing of ore, and fabrication of fuel.

• In addition, production of heavy water, used as a moderator and coolant in pressurised heavy water reactors, also constitutes a major programme segment of the Nuclear Power Programme.

• DAE has been working to enhance its capabilities in uranium mining and mineral processing and to make itself self-sufficient in the production of heavy water, zirconium alloy components and supplies for the pressurised heavy water reactor.

• The Heavy Water Board produces heavy water for all Pressurised Heavy Water Reactors in a cost effective manner enabling the department to provide nuclear power at an affordable cost to the common man.

• Over a period of time, Heavy Water Board (HWB) has emerged as the largest global producer and a trusted supplier of this strategic material.

• The performance of the Board during the period was excellent with respect to production, specific energy consumption, on-stream factor and plant safety.

• Heavy Water Board (HWB), with its decades of experience of handling isotope separation process, took up development, demonstration and deployment of indigenous technologies for the production of enriched Boron.

• HWB is now capable of achieving enrichment levels beyond 95 per cent in multiple chemical forms.

• Sodium is an important input for FBRs, used as a coolant in the reactor. 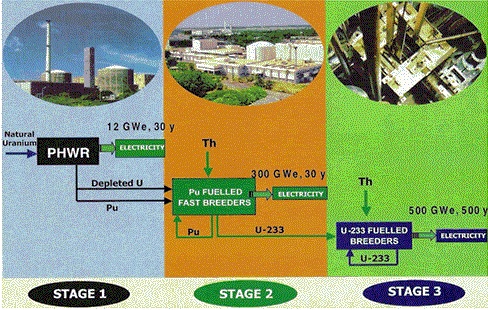 • Atomic Minerals Directorate for Exploration and Research (AMD) continued the accelerated pace of exploration activities with a focussed approach to augmentation of uranium, thorium and rare metals.

• Rare Metal and Rare Earth (RMRE) investigations resulted in the location of significant concentrations of RMRE along with Chhattisgarh, Tamil Nadu and Karnataka.

• The Mining and processing of uranium ore in India are done by the Uranium Corporation of India Ltd. (UCIL).

• A new mine and a processing plant are also under construction at Tummalapalle, Andhra Pradesh.

• The Indian Rare Earths Limited (IREL) is a well known mini ratna company and it is mainly associated with mining and production of beach sand minerals and rare earth compounds.

• Incineration of combustible wastes can be applied to both radioactive and other wastes.

• The Joule Melter Technology is essentially a single step process, where immobilisation of HLW in a borosilicate glass matrix is achieved in a refractory lined melter.

• In general borosilicate glass has been chosen as the medium for dealing with HLW.

• An innovative method to partition the radio-elements from inactive salt constituents using indigenously developed solvents was employed for the management of radioactive waste.

• The Fast Reactor Programme of IGCAR is supported in its endeavours in a range of disciplines such as reactor engineering, materials science, metallurgy, and safety.

• BARC contributes to the research & development and manufacture of fuels for fast reactors, technology for reprocessing of fuels, waste management and health and safety of the workforce.

• PFBR is a pool type reactor using a mixed oxide of uranium and plutonium as fuel.

• The coolant used is liquid sodium.

• The project is located 500 m south of the existing Madras Atomic Power Station.

• Electrorefining of U-Pu-Zr-alloy in the molten LiKCIPuCI3 electrolyte was demonstrated at IGCAR.

• Towards reprocessing programme, the operation of CORAL (Compact Reprocessing facility for Advanced fuels in Lead cells) facility provided immense experience in the domain of remote handling & maintenance and in achieving product purity in addition to reprocessing the FBTR fuel.

• A 5/8th scale 90° sector model simulating the hot pool of future FBRs was commissioned for conducting hydraulic studies in water.

• A new facility was commissioned to study the flow induced vibration characteristics of a cluster of sub-assemblies of the core of FBR.

• Nuclear power employing closed fuel cycle is the only sustainable option for meeting a major part of the world energy demand.

• World resources of thorium are larger than those of uranium. Thorium, therefore is, widely viewed as the ‘fuel of the future’.

• The Indian Nuclear Power Programme Stage-3 aims at using thorium as fuel for power generation on a commercial scale.

• In the thorium fuel cycle, thorium 232 is transmuted into the fissile isotope uranium 233 which is a nuclear fuel.

• As a part of this programme, BARC has been developing a 300 MWe Advanced Heavy Water Reactor (AHWR).

• Fuelled by thorium and using light water as coolant and heavy water as a moderator, this reactor will have several advanced passive safety features.

On the basis of the three-stage plan and assuming optimistic development times, some predictions about nuclear power in India can be made as follows:

• The Integrated Energy Policy of India estimates the share of nuclear power in the total primary energy mix to be around 4% - 6.4% by the year 2032

At this pace of innovation and research, 30% of the Indian electricity in 2050 shall be generated from thorium based reactors. Indian nuclear scientists estimate that the country could produce electricity for at least four centuries using just the country’s economically extractable thorium reserves.

Moreover, calling for more research into thorium as an energy source and the country’s indigenous three-stage programme prospects the best future results for India.