Location of the Industries is the key to the balanced regional Growth of our nation. Industrial location is the key component of the inclusive growth as envisaged by the Government.But it depends on several factors. Lets see those factors and the relatied theories

Industries are not distributed evenly across the globe and it is found to be concentrated in certain areas due to different factors which maximize profits, with relative ease in doing business. Industry requires certain fundamental infrastructures like power, water and integrated transportation system which can be provided in much lesser time in selected areas than in entire country. Industries tends to locate in these areas were production cost is less compared to other areas. Cluster can be for both exports and internal demand within the country.

Developing industrial clusters has become a key model for regional economic development as clusters have been shown to strengthen competitiveness by increasing productivity, stimulating innovative new partnerships, even among competitors, and presenting opportunities for entrepreneurial activity.

Some of the factors influencing the development of industrial clusters are as follows:

Policies in the form of taxation concession, stable policy, cheaper land, administrative ease and good governance facilitates the development of Industrial clusters. In pursuance to this GOI passed the Special Economic Zones Act, in 2005. Further Government has established National Investment and Manufacturing Zones for increasing the manufacturing share in country’s GDP from 16 percent to 25 percent by 2022.
Governments adopt ‘regional policies’ to promote ‘balanced’ economic development and hence set up industries in particular areas.

Speedy and efficient transport facilities, integrated with all modes of transportation, to carry raw materials to the factory and to move finished goods to the market are essential for the development of cluster. Delhi-Mumbai industrial corridor is being developed with the facility of integrated transportation system and dedicated freight corridor.

The existence of a market for manufactured goods is the most important factor in the location of industries. ‘Market’ means people who have a demand for these goods and also have the purchasing power.

Industries need continuous and cheap source of power to be competitive both domestically and internationally.

Raw material used by industries should be cheap and easy to transport. Industries based on cheap, bulky and weight-losing material (ores) are located close to the sources of raw material such as steel, sugar, and cement industries.

Many industries benefit from nearness to a leader-industry and other industries. These benefits are termed as agglomeration economies. Savings are derived from the linkages which exist between different industries.

These theories explain the location of Industry, and also to predict suitable locations for future developments.

A central theme in the development of industry is the concept of optimum location which gives the best profits. The best location is therefore where costs are lowest and revenues are highest.
There are certain limitations to these theories as the world is dynamic and keeps on changing so profitability is not absolute, and a basic distinction need to be made between long-term and short-term profitability.
Two principal approaches to optimum location are least cost theories (variations in cost) and Maximum revenue theories (variations in revenue).

There are two general classes of costs: transportation cost, involves in the collection of raw materials and the distribution of finished products; and processing costs, such as labour, power, capital and services. The least cost assumes that the manufacturer would best locate where the sum total of these costs is least.
The most important attempt to develop a theory based on minimum-cost location came from Alfred Weber where location choice is influenced by transport costs, labour cost and agglomeration. Transport cost is the primary factor and labour cost and agglomeration is secondary factor. In weight losing industry, place of production (p) is pulled towards resource centres M1 and M2 and in weight gaining industry production point P is pulled towards market/demand centre C. 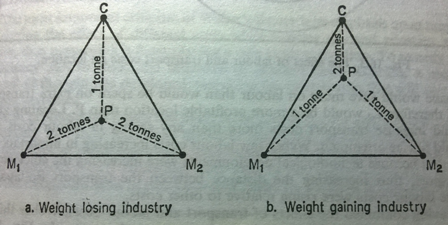 Cotton Industry in India- established near the region of black cotton soil which produced bulk of the cotton, in parts of Maharashtra and Gujarat. The finished products from textile Industries were exported from Mumbai port which flourished these region as cotton belt of India. The first cotton mill came in Bombay and subsequently in parts of Gujarat.

Jute Industry- flourished near jute producing areas of west Bengal and Bangladesh which were exported via Kolkata port.
Iron and Steel Industry- of Bokaro, Jamshedpur and Bhilai depends upon the iron ore and coal of chota nagpur plateau for their production.

This theory considers the influence of demand for optimum location that will give rise to the largest revenues. Most producers of goods are likely to be competing for markets with other producers and decisions will affect each other. Point of maximum revenue will depend upon price, transport costs and the possibility of substitution.
One of the most important theory with major emphasis on demand was made by A. Losh in 1940. It explained the size and shape of market areas within which a location would command the largest revenue.

Weber was crticised for overemphasizing supply and Losch for overemphasizing demand. These location theory assumed decisions are taken by economic man having perfect knowledge but decision are often taken considering profit only and environment provided by the respective governments like tax concession, cheap loan etc.