In this article you will get the clue that from where and how the questions are being framed from the chapter Magnetic Effect of Electric Current.

In this article you will get the clue that from where and how the questions are being framed from the chapter Magnetic Effect of Electric Current
The experts of jagranjosh.com have full confidence that you will not miss any of the questions in the board exam as well as in competitive exams from this chapter if you will keep the following terms / question in your mind while studying

Q1. The correct field lines are 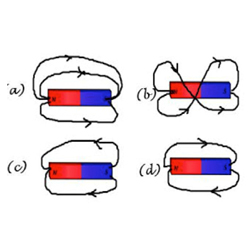 Q2. An electric current passes through a straight wire in the direction of south to north. Magnetic compasses are placed at points A and B as shown in the figure. What is your observation? 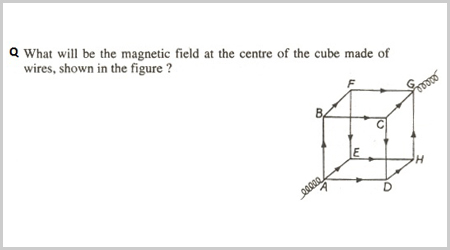 Q3. Choose the incorrect statement from the following regarding magnetic lines of field

Q4. What would be the effect of replacing ordinary bulbs with CFLs?

a. CFLs give less light than regular bulb hence room would be less bright
b. CFLs use less electricity hence electric bill will be reduced
c. CFLs produce more heat hence chances of fire will be increased

Q5. A coil of insulated copper wire is connected to a galvanometer forming a loop and a magnet is
A: held stationary, B : moved away along its axis C : moved towards along its axis,  There will be induced current in

Q6. If two circular coils can be arrange in any of the tree situations shown in the diagram below, then their mutual induction will be…. 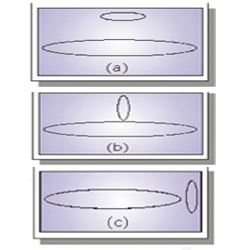 Q8. A magnetic field of 5 Tesla is produced by a long wire carrying a current of 5A at a point distance 2 m from it. If the distance is made four-fold, the magnetic field will be

Q9. A constant current flows in a horizontal wire in the plane of the paper from east to west as shown below, the direction of magnetic field at a point will be north to south 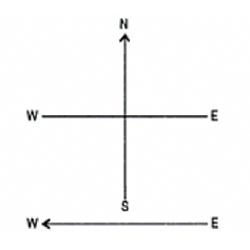 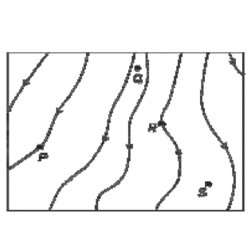 Q11. The direction of induced curent is obtained by

Q12. A soft iron bar is introduced inside a current carrying solenoid. The magnetic field inside the solenoid

a. will become zero
b. will decrease
c. will increase
d. will remain unaffected

Q13. Which of the following diagrams correctly shows the magnetic field produced by a current-carrying wire? 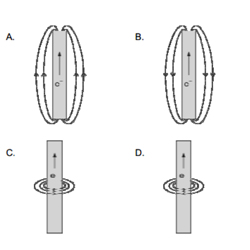