AIMA conducts MAT Exam for admission to management colleges. Equip yourself for the examination with the help of solved Data Analysis & Sufficiency section from September 2012 MAT Question paper. It consists of 40 questions.

Previous year paper is the best source to know about the real level of questions asked in the entrance exam. Jagranjosh.com has brought the solved Data Analysis & Sufficiency section from September 2012 MAT Question paper. It consists of 40 questions. Practice well to succeed in the exam.

Directions (Qs. 1 to 5): Study the graph below to answer these questions.

The bar graph depicts the distribution of the marks scored by six students A, B, C, D, E and F in four different subjects, as a percentage of their aggregate marks for the four subjects. 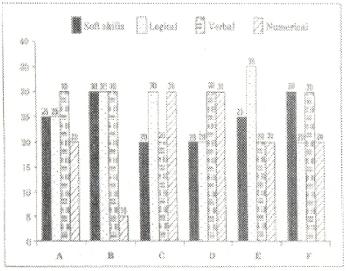 1. If a Certificate of Merit is awarded to the student who scored the highest marks in Numerical, then who would get it?