The IAS aspirants practice multiple choice of each and every section of History so that no questions remained unanswered. Here, we have provided important modern history questions for IAS Prelims Exam. 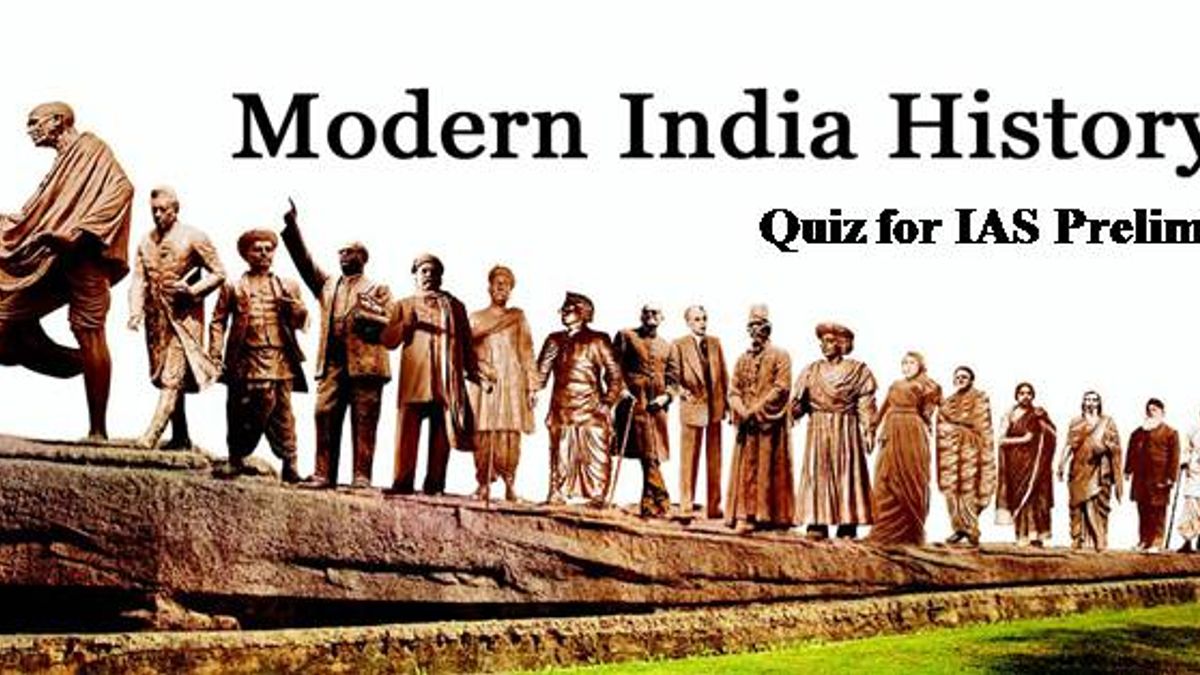 Multiple Choice Questions asked from Modern Indian History section in IAS Prelims Exam are quite easy but the candidates need to memorise well before appearing in the exam. The candidates should have balanced preparation of overall three sections of the History and its chronology is one of the most important parts of the subject history which enable candidates to memorise well every important aspect of history.

The Government of India, which was generally pro-capitalist, took some half-hearted and totally inadequate steps to mitigate the sorry state of affairs in the modern factories, many of which were owned by Indians. In this it was only in part moved by humanitarian considerations. The manufacturers of Britain put constant pressure on it to pass factory laws. They were afraid that cheap labour would enable Indian manufacturers to outsell them in the Indian market. The first Indian Factory Act was passed in 1881. The Act dealt primarily with the problem of child labour. It laid down that children below 7 could not work in factories, while children between 7 and 12 would not work for more than 9 hours a day. Children would also get four holidays in a month. The Act also provided for the proper fencing off of dangerous machinery.

2. Consider the following statements regarding the second Indian Factories Act:
1. It provided for a weekly holiday for all workers.
2. Working hours for women were fixed at 11 per day while daily hours of work for children were reduced to 7.

The second Indian Factories Act was passed in 1891. It provided for a weekly holiday for all workers. Working hour9 for women were fixed at 11 per day while daily hours of work for children were reduced to 7. Hours of work for men were still left unregulated.

The Indian press was freed from restrictions by Charles Metcalfe in 1835. This step had been welcomed enthusiastically by the educated Indians. It was one of the reasons why they had for some time supported British rule in India. But the nationalists gradually began to use the press to arouse national consciousness among the people and to sharply criticise the reactionary policies of the Government. This turned the officials against the Indian press and they decided to curb its freedom. This was attempted by passing the Vernacular Press Act in 1878. This Act put serious restrictions on the freedom of the Indian language newspapers. Indian public opinion was now fully aroused and it protested loudly against the passage of this Act. This protest had immediate effect and the Act was repealed in 1882. For nearly 25 years thereafter the Indian press enjoyed considerable freedom. But the rise of the militant Swadeshi and Boycott movement after 1905 once again led to the enactment of repressive press flaws in 1908 and 1910.

The Lucknow Pact is known for it’s achieved the goal of Hindu-Muslim unity and generate the anti-British feelings among the Muslims. In this pact, Congress with Muslim League jointly demanded the ‘Dominion Status’ of the country.

5. After acquiring the royal charter, the East India Company could:
a. venture across the ocean
b. buy goods at a cheap price and sell at higher price
c. could carry their business to European countries
d. All of the above

The royal charter that granted by Queen Elizabeth I to the East India Company, permitted them to do their business of buying cheaper goods from the east and sell them to the European countries.