Get NCERT Exemplar Solutions for Class 12 Physics, Chapter 1: Electric Charges and Fields. In this article, you will get solutions from question number 1.26 to 1.31. Questions from NCERT Exemplar are frequently asked in CBSE board exam and various engineering entrance exams.

NCERT Exemplar Solutions for Class 12 Physics, Chapter 1: Electric Charges and Fields are available here. Here you will get solutions for long answer type questions i.e., from question number 1.26 to 1.31. Solutions of other questions are already present in Part I, Part II, Part III and Part IV. Questions from NCERT Exemplar are frequently asked in CBSE board exams and other competitive exams like JEE Main, JEE Advanced, NEET etc.

Question 1.26: In 1959 Lyttleton and Bondi suggested that the expansion of the Universe could be explained if matter carried a net charge. Suppose that the Universe is made up of hydrogen atoms with a number density N, which is maintained a constant. Let the charge on the proton be: ep = – (1 + y)e where e is the electronic charge.

(a) Find the critical value of y such that expansion may start.

(b) Show that the velocity of expansion is proportional to the distance from the centre. 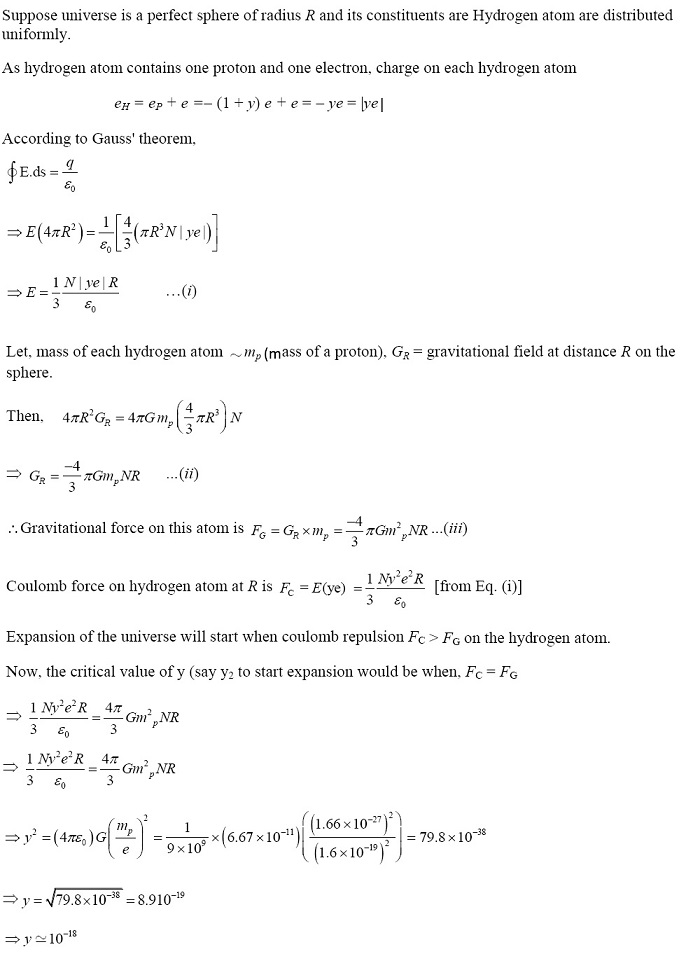 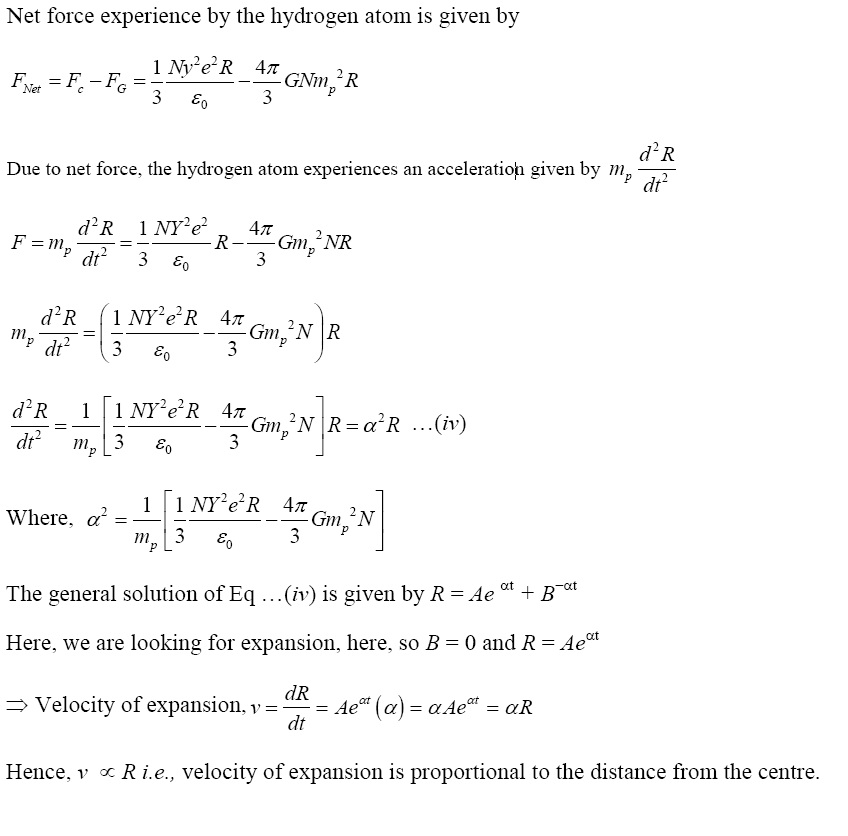 Question 1.27: Consider a sphere of radius R with charge density distributed as

(a) Find the electric field at all points r.

(b) Suppose the total charge on the sphere is 2e where e is the electron charge. Where can two protons be embedded such that the force on each of them is zero. Assume that the introduction of the proton does not alter the negative charge distribution. 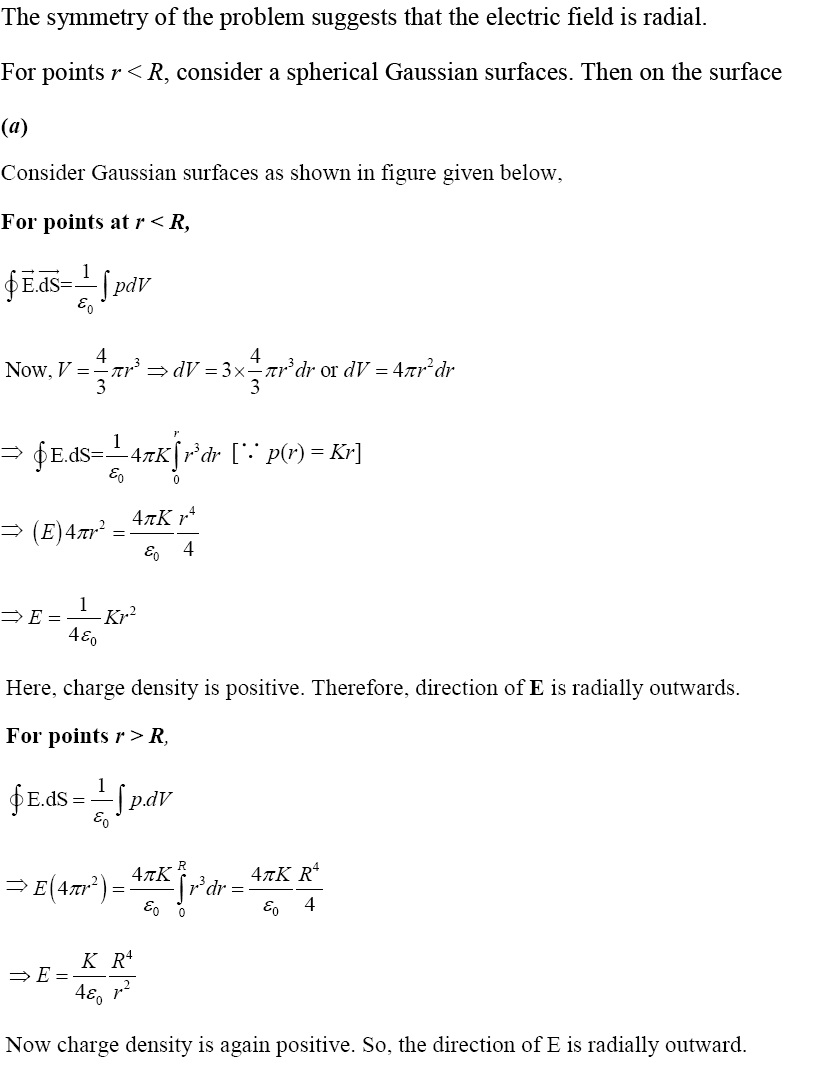 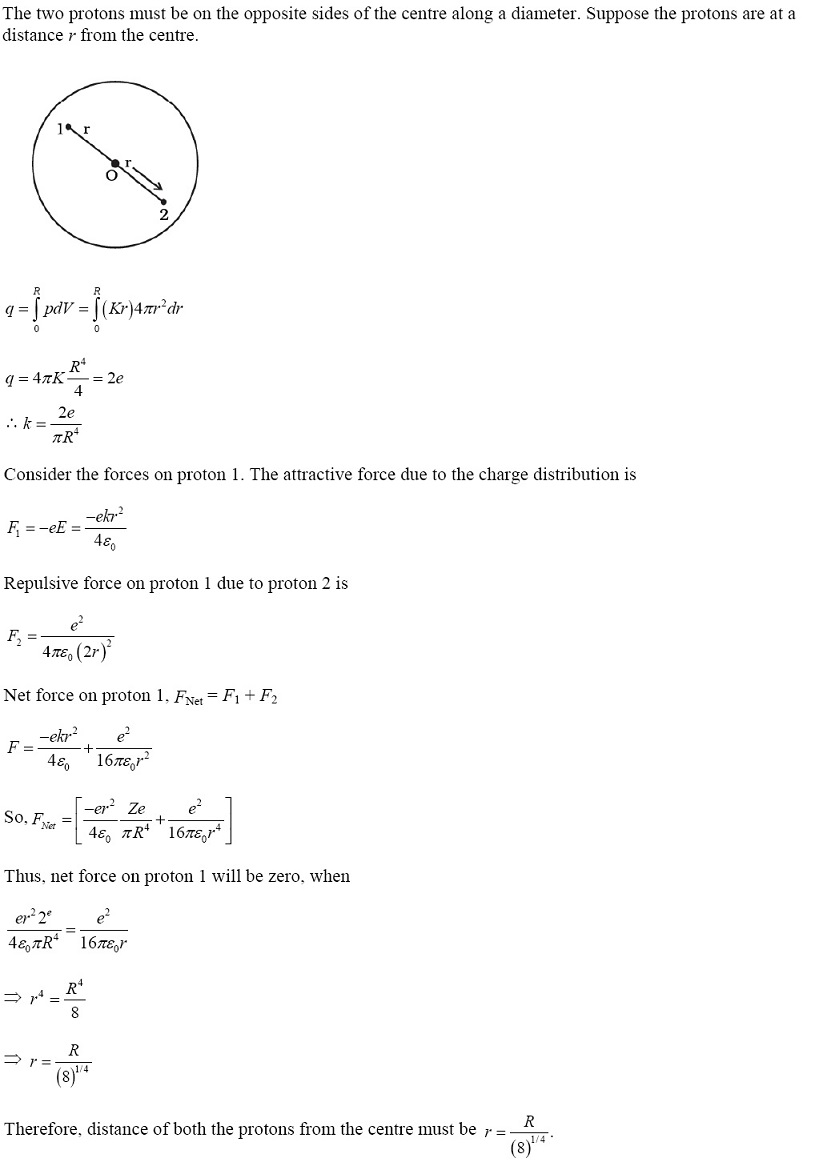 Question 1.28: Two fixed, identical conducting plates (α & β), each of surface area S are charged to – Q and q, respectively, where Q > q > 0. A third identical plate (γ), free to move is located on the other side of the plate with charge q at a distance d (Fig 1.13). The third plate is released and collides with the plate β. Assume the collision is elastic and the time of collision is sufficient to redistribute charge amongst β & γ 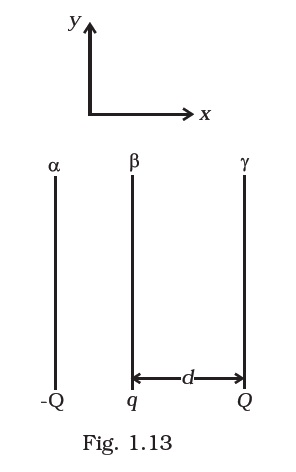 (a) Find the electric field acting on the plate γ before collision.

(b) Find the charges on β and γ after the collision.

(c) Find the velocity of the plate γ after the collision and at a distance d from the plate β.

There is another useful system of units, besides the SI/mks A system, called the cgs (centimeter-gram-second) system. In this system Coloumb’s law is given by 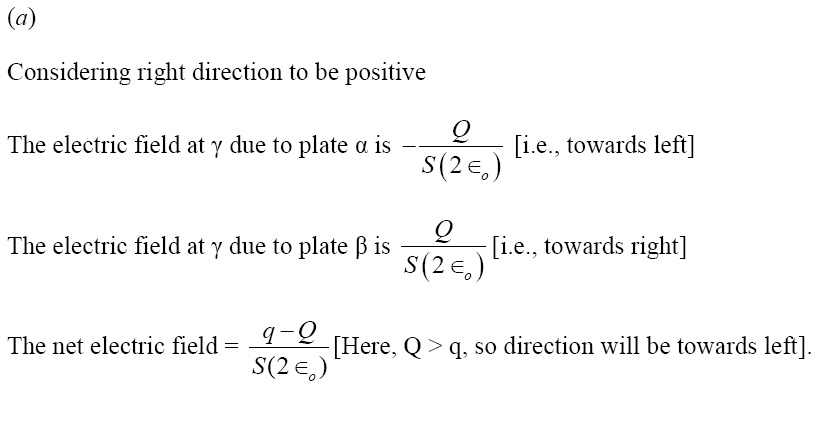 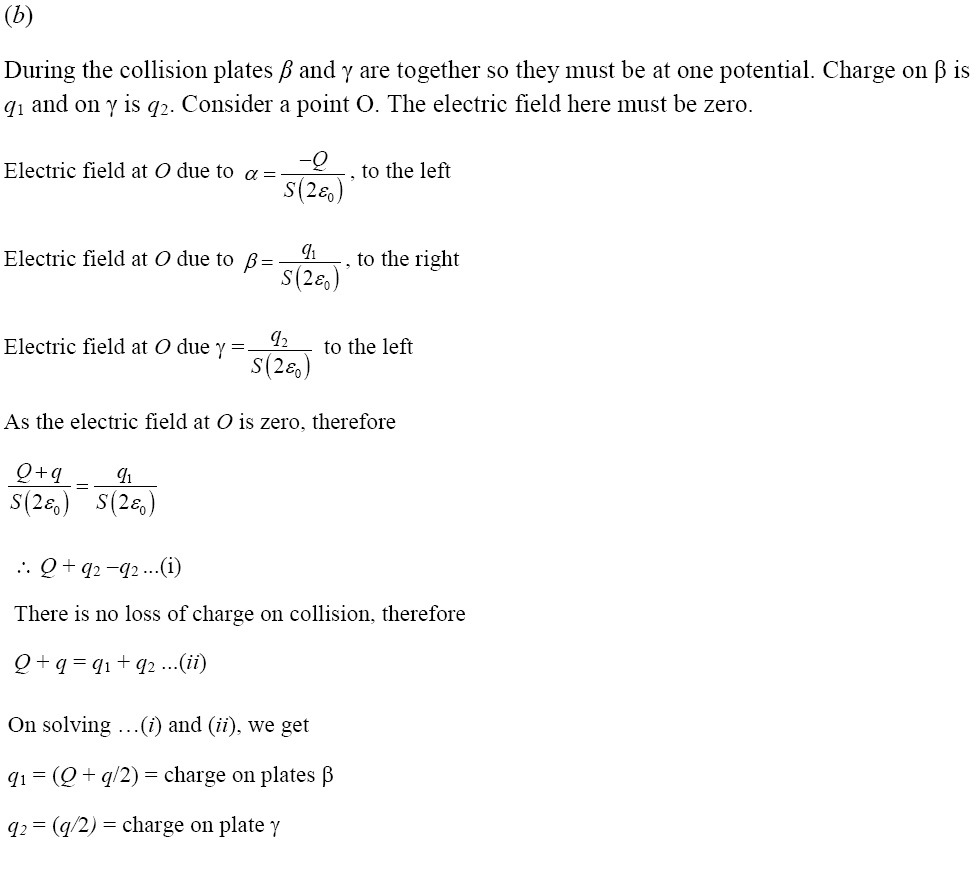 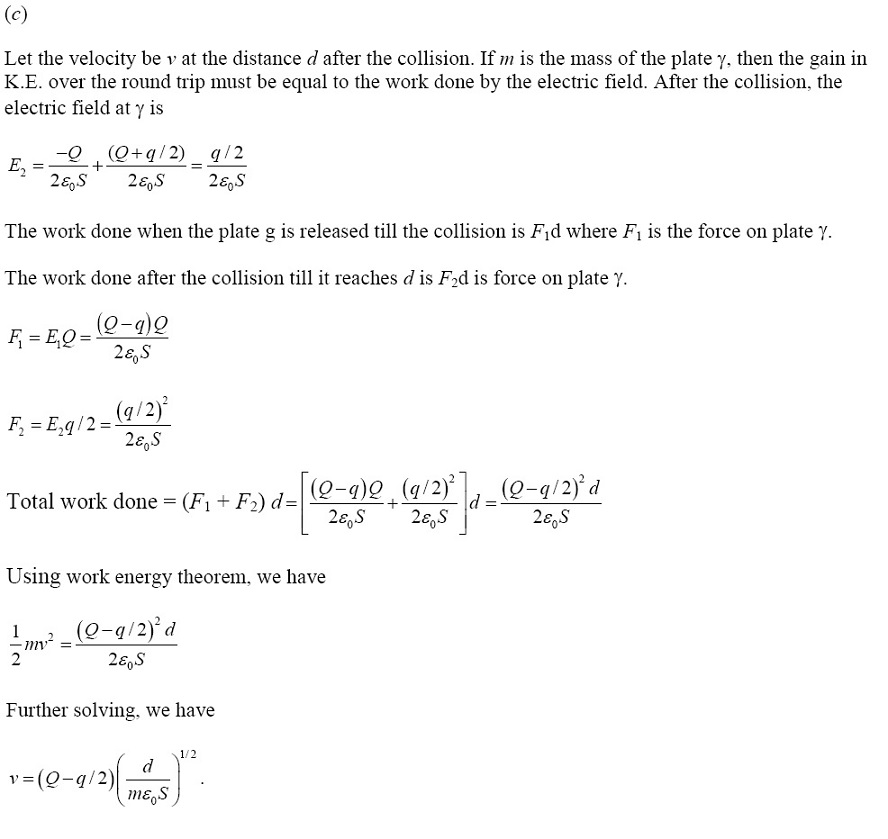 Question 1.29: There is another useful system of units, besides the SI/mks A system, called the cgs (centimeter-gram-second) system. In this system Coloumb’s law is given by

(i) Show that the coulomb law in cgs units yields

(ii) Write 1 esu of charge = x C, where x is a dimensionless number. Show that this gives 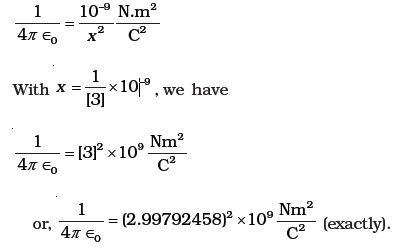 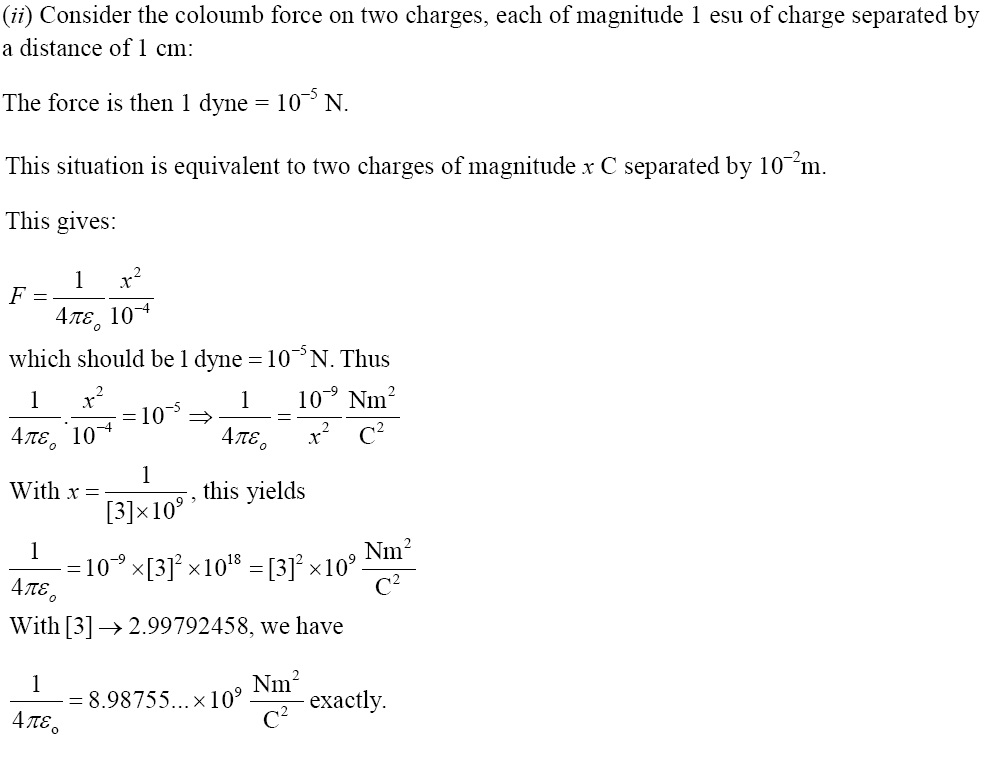 Question 1.30: Two charges –q each are fixed separated by distance 2d. A third charge q of mass m placed at the mid-point is displaced slightly by x (x<<d) perpendicular to the line joining the two fixed charged as shown in Fig. 1.14. 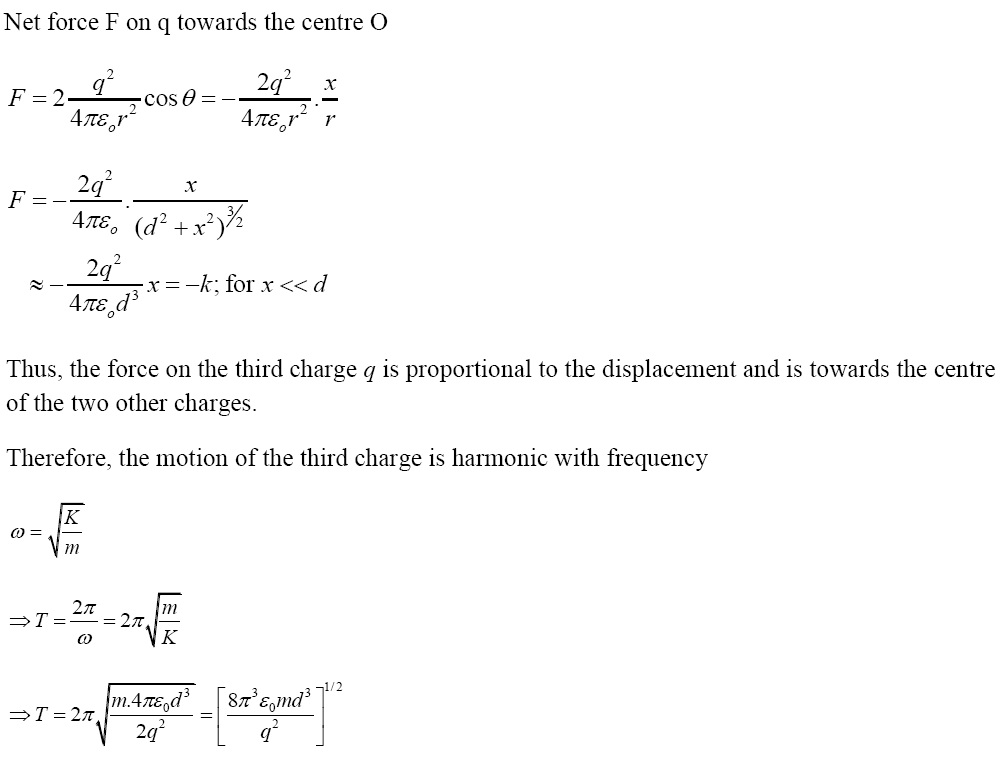 Question 1.31: Total charge –Q is uniformly spread along length of a ring of radius R. A small test charge +q of mass m is kept at the centre of the ring and is given a gentle push along the axis of the ring.

(a) Show that the particle executes a simple harmonic oscillation.

(b) Obtain its time period. 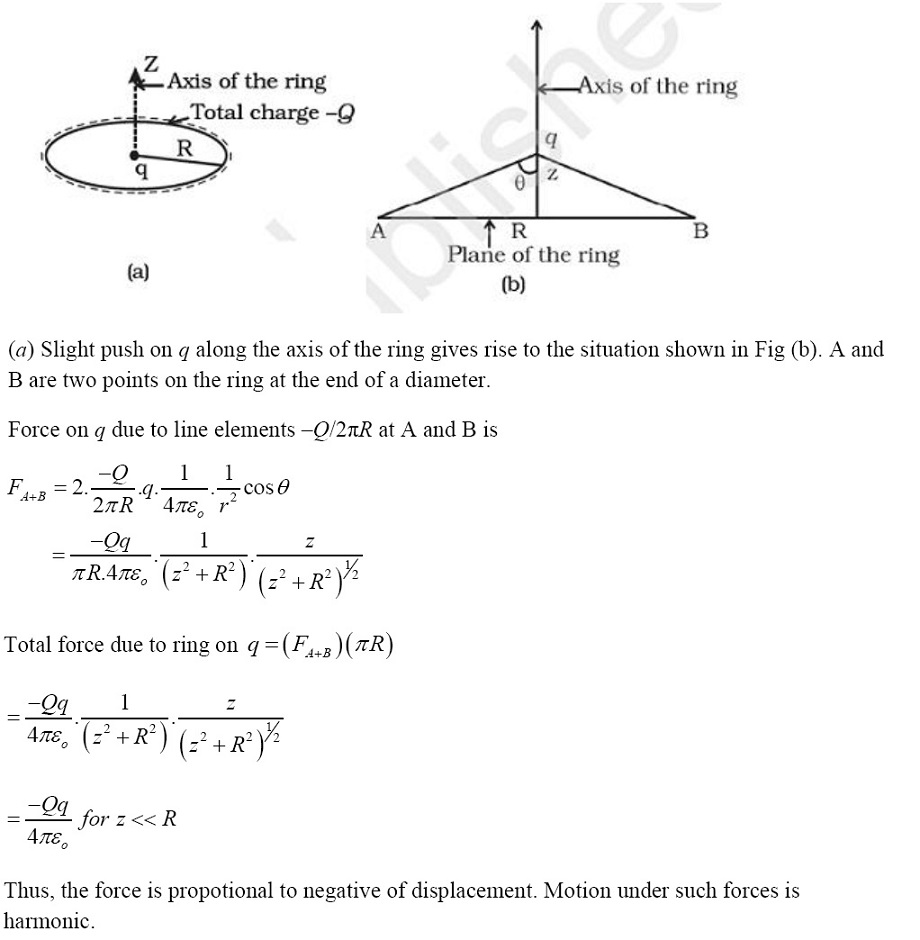