Find NCERT Exemplar Solutions for Class 12 Physics, Chapter 2: Electrostatic Potential and Capacitance. In this article, you will find solutions of multiple choice questions with multiple correct answers (i.e., question number 2.7 to question number 2.13). These questions are important for CBSE board exams and other competitive exams. 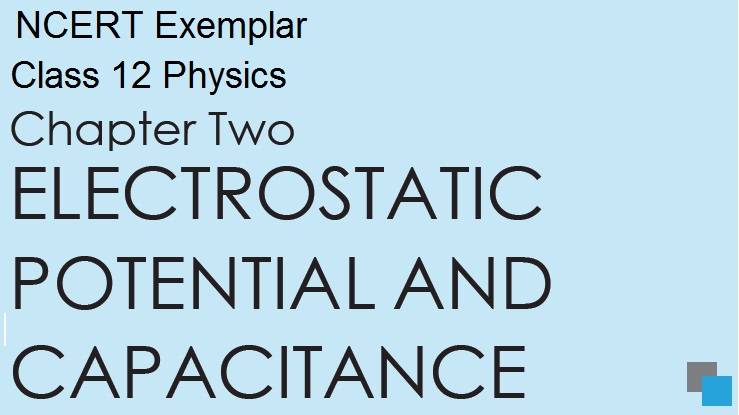 NCERT Exemplar Solutions for Class 12th Physics, Chapter 2: Electrostatic Potential and Capacitance are available here. In this article, you will find solutions to multiple choice questions with multiple correct answers i.e., question number 2.7 to question number 2.13. Questions from NCERT Exemplar are frequently asked in CBSE 12th Physics board exam and other competitive exams.

NCERT Exemplar Solutions for Class 12th Physics, Chapter 2 (from question number 2.7 to 2.31) are given below:

Question 2.7: Consider a uniform electric field in the ˆz direction. The potential is a constant

Here, electric field is uniform and in the direction of +ve Z axis.

So, x-y plane will act as equipotential surface. In other words, potential at any point, which lies on x-y plane, x axis and y – axis will be constant.

(b) will be more crowded near sharp edges of a conductor

(c) will be more crowded near regions of large charge densities

(d) will always be equally spaced

As the electric field intensities is large near sharp edges of a charged conductor or near the regions of large charge densities. Therefore, numbers of equipotential surfaces are closer to such places or in other words they are more crowded.

Question 2.9: The work done to move a charge along an equipotential from A to B

Question 2.10: In a region of constant potential

(a) the electric field is uniform

(b) the electric field is zero

(c) there can be no charge inside the region.

(d) the electric field shall necessarily change if a charge is placed outside the region.

If V is constant then it implies that electric potential at that place is zero. It may also be possible that there can be no charge inside the region. 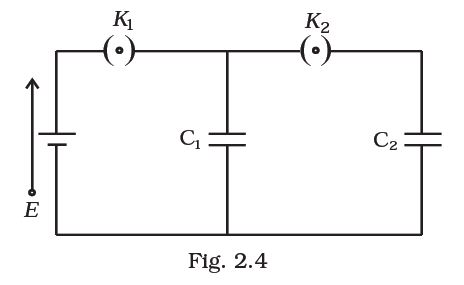 When key K1 is dosed and K2 is open, the capacitor C1 gets charged by cell.

When K1 is opened and K2 is closed, the charge stored by capacitor C1 gets redistributed between C1 and C2 until potential of both the capacitors become same (i.e., V1 = V2).

Question 2.12: If a conductor has a potential V ≠ 0 and there are no charges anywhere else outside, then

(a) there must be charges on the surface or inside itself.

(b) there cannot be any charge in the body of the conductor.

(c) there must be charges only on the surface.

(d) there must be charges inside the surface.

Charge always resides on the outer surface of a closed charged conductor.

Question 2.13: A parallel plate capacitor is connected to a battery as shown in Fig. 2.5. Consider two situations:

A: Key K is kept closed and plates of capacitors are moved apart using insulating handle.

B: Key K is opened and plates of capacitors are moved apart using insulating handle. 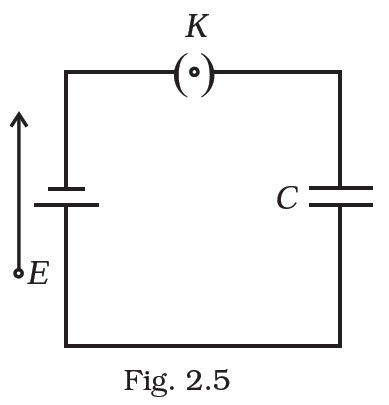 a) In A: Q remains same but C changes.

(c) In A: V remains same and hence Q changes.

(d) In B: Q remains same and hence V changes.

In case A, key K is kept closed and plates of capacitors are moved apart using insulating handle (i.e. distance between plates is increasing). As capacitance C = [(KεoA)/d] ⇒ C ∝ d (separation between plates) so, capacitance will decrease & amount of charge stored will also decrease (as Q = CV). Here, there will be no change in potential difference.