Check NCERT Solutions for Class 10 English subject. In this article, we have provided solutions of all the questions of Class 10 NCERT Textbook - First Flight (Chapter 7 Glimpses of India) 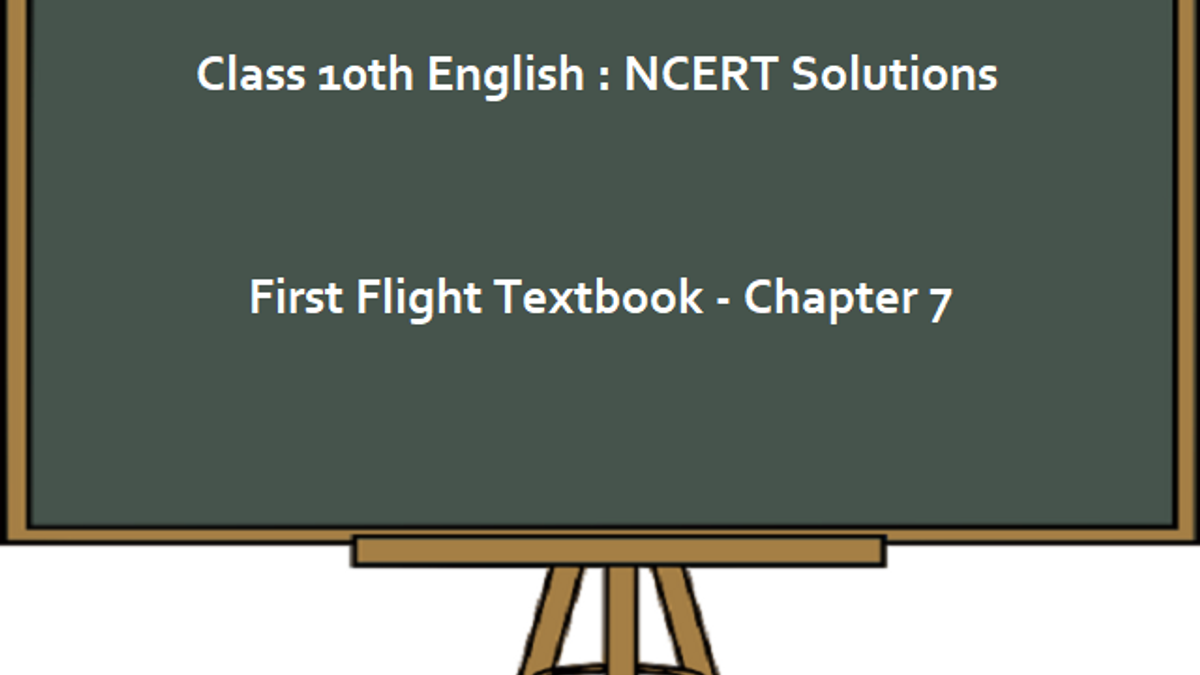 In this article, students can access NCERT Solutions for Chapter 7 of Class 10 English subject (First flight Textbook). The NCERT solutions have been provided after a detailed analysis of the marking scheme of CBSE by the subject experts. Chapter 7 of the First Flight textbook is a summation of 3 individual Chapters Hence, students need to read all chapters carefully to answer the questions. Class 10th students can study these answers to score well in school as well as Class 10th board exams.

Ques: What are the elders in Goa nostalgic about?

Answer: The elders in Goa were nostalgic about the good old Portuguese days and the famous Portuguese loaves of bread.

Ques: Is bread-making still popular in Goa? How do you know?

Answer: Bread-making is still a popular profession in Goa. The author says that the mixers, molders, and those who bake the loaves are still present in Goa. The age-old, time-tested furnaces still exist. The ‘thud’ and ‘jingle’ of the traditional baker’s bamboo, marking his arrival in the morning, could still be heard in some places. It is a family profession, which is carried out generations after generations.

Ques: What is the baker called?

Answer: The bakers are known as pader in Goa.

Ques: When would the baker come every day? Why did the children run to meet him?

Answer: The baker came twice every day. Once during his morning sale round, and then again when he returned after emptying his huge basket. The children ran to meet him not because of their love of the loaf, which was bought by the maid-servant of the house. They actually longed for the bread-bangles, which they chose carefully. Sometimes, it was a sweet bread.

Ques: What did the bakers wear: (i) in the Portuguese days? (ii) when the author was young?

Answer: (i) In the Portuguese days, the bakers had a peculiar dress known as the kabai. It was a single-piece long frock reaching down to the knees.

(ii) When the author was young, he saw the bakers wearing a shirt and trousers, which were shorter than full-length and longer than half pants.

Answer: Anyone who wears a half-pant that reaches just below the knees invites the comment that “he is dressed like a pader”. This is because the bakers were known as pader and they wore such half pants.

Ques: Where were the monthly accounts of the baker recorded?

Answer: The monthly accounts of the baker were recorded on some wall in pencil.

Ques: What does a ‘jackfruit-like appearance’ mean?

Answer: A ‘jackfruit-like appearance’ means a plump physique. Such a physique was linked to the bakers because they never starved. Baking was a profitable profession. The baker, his family, and his servants always looked happy and prosperous and had a ‘jackfruit-like plump appearance’.

Ques: Which of these statements are correct?

Answer: (i) The pader was an important person in the village in old times.

(iii) The paders went away with the Portuguese.

(iv) The paders continue to wear a single-piece long frock.

Ans: Incorrect. The paders wear shirts, and trousers that are shorter than full-length ones and longer than half pants.

(v) Bread and cakes were an integral part of Goan life in the old days.

Ans: Incorrect. Bread and cakes are still an integral part of Goan life.

(vii) Paders and their families starve in the present times.

Ques: Is bread an important part of Goan life? How do you know this?

Answer: Bread is an important part of Goan life. Marriage gifts are meaningless without the sweet bread known as the bol. For a party, bread is a must, while for Christmas, cakes and bolinhas are a tradition. Sandwiches must be prepared by the lady of the house on her daughter’s engagement. The author says that everybody loves the fragrance of loaves. The elders were given loaves and the children were given bread-bangles, which they longed for. Also, the fact that a bakery is a profitable profession shows that love for bread is enormous in Goa.

Ques: Where is Coorg?

Answer: Coorg is the smallest district of Karnataka, located midway between Mysore and Mangalore.

Ques: What is the story about the Kodavu people’s descent?

Answer: According to the author, the fiercely independent people of Coorg are of Greek or Arabic descent. A part of Alexander’s army moved south along the coast. They settled there when return became impractical. These people married amongst the locals and their culture is evident in the martial traditions, marriage, and religious rites, which are distinct from the Hindu mainstream.

The Kodavus wear a long, black coat, with an embroidered waist-belt, known as kuppia. It resembles the kuffia worn by the Arabs and the Kurds, hence supporting the theory of their Arab origin.

Ques: What are some of the things you now know about

(i) the people of Coorg?

(ii) the main crop of Coorg?

(iii) the sports it offers to tourists?

(iv) the animals you are likely to see in Coorg?

(v) its distance from Bangalore, and how to get there?

Answer: (i)The people of Coorg are fiercely independent. They are of Greek or Arabic descent. They have a tradition of hospitality. They enjoy recounting numerous tales of valour related to their sons and fathers. Kodavus are the only people in India permitted to carry firearms without a license. The author has described the people of Coorg as a proud race of martial men and beautiful women.

(ii) Coffee is the main crop of Coorg. The coffee estates stand tucked under tree canopies in prime corners.

(iv) The animals that one is likely to see in Coorg are birds, bees, butterflies, macaques, Malabar squirrels, langurs, loris, and wild elephants.

(v) The distance between Coorg and Bangalore is around 260 km. There are two routes to Coorg from Bangalore and both are of the same distance. The most frequented route is the one via Mysore. The other route is via Neelamangal, Kunigal, and Chanrayanapatna.

Ques: Here are six sentences with some words in italics. Find phrases from the text that have the same meaning. (Look in the paragraphs indicated)

(i) During monsoons it rains so heavily that tourists do not visit Coorg. (para 2)

(ii) Some people say that Alexander’s army moved south along the coast and settled there. (para 3)

(iii) The Coorg people are always ready to tell stories of their sons’ and fathers’ valour. (para 4)

(iv) Even people who normally lead an easy and slow life get smitten by the high-energy adventure sports of Coorg. (para 6)

(v) The theory of the Arab origin is supported by the long coat with embroidered waist-belt they wear. (para 3)

Answer: (i) keep many visitors away

(ii) as one story goes

(iii)are more than willing to recount

(iv) the most laidback individuals become converts to

Ques: Complete the following phrases from the text. For each phrase, can you find at least one other word that would fit into the blank?

You may add your own examples to this list.

Answer: (i) tales of valour

(iii) a piece of heaven