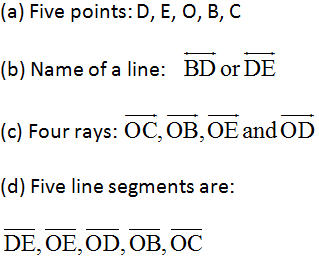 2. Name the line given in all possible (twelve) ways, choosing only two letters at a times from the four given.

All the possible names for the given line can be written as follows:

(b) Line passing through A. 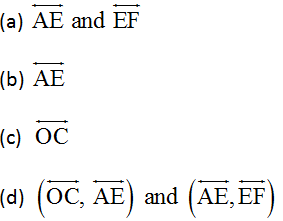 4. How many lines can pass through

(a) one given point?

(b) two given points?

(a) Infinite number of lines can pass through a given point.

(b) Only one line can pass through two given points.

5. Draw a rough figure and label suitably in each of the following cases:

6. Consider the following figure of line MN. Say whether following statements are true or false in context of the given figure. 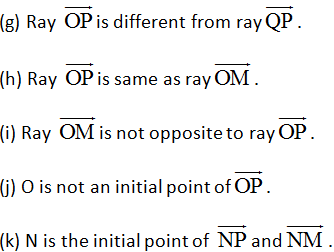 1. Classify the following curves as (i) open or (ii) closed. 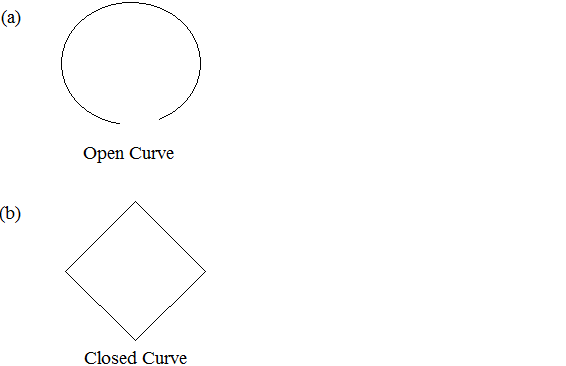 3. Draw any polygon and shade its interior.

4. Consider the given figure and answer the questions.

5. Illustrate, if possible, each one of the following with a rough diagram:

(a) A closed curve that is not a polygon.

(b) An open curve made up entirely of line segments.

(c) A polygon with two sides.

(a) Circle is a closed curve but not a polygon.

(b) Below is given an open curve made up entirely of line segments:

(c) It is not possible to have a polygon with two sides.

1.Name the angles in the given figure.

Angles given in figure are:

2.In the given diagram, name the point(s):

(a) In the interior of ∠DOE

(b) In the exterior of ∠EOF

(a) A is the point lying in the interior ∠DOE.

(b) C is the point lying in the exterior ∠EOF.

3.Draw rough diagrams of two angles such that they have

(а) one point in common.

(b) two points in common.

(a) In the following figure, O is the common point of ∠AOC and ∠BOD.

(b) In the following figure, O and Bare the common points in ∠AOB and ∠BOC.

(c) In the following figure, O, D and B are the common points in ∠AOB and ∠BOC.

(d) In the following figure, O, D, E and B are the common points in ∠AOB and ∠BOC.

(e)  In the following figure, ray OB is common in both∠AOB and ∠DOB.

Required triangle ABC is the given below:

Point A is neither in the exterior nor in the interior. It lies on the triangle ABC.

2.(a) Identify three triangles in the figure.

(6) Write the names of seven angles.

(d) Which two triangles have ∠B as common?

(a) Three triangles are:

(b) Names of seven angles are:

1.Draw a rough sketch of a quadrilateral PQRS. Draw its diagonals. Name them. Is the meeting point of the diagonals in the interior or exterior of the quadrilateral?

Required quadrilateral PQRS is drawn as below:

Here PR and QS are its two diagonals.

2.Draw a rough sketch of a quadrilateral KLMN. State:

(a) two pairs of opposite sides

(b) two pairs of opposite angles

Required quadrilateral KLMN is drawn as below:

(a)  Two pairs of opposite sides are:

(b)Two pairs of opposite angles are:

KL and KN, NM and ML

1.From the figure, identify:

(a) the centre of circle

(e) two points in the interior

(f) a point in the exterior

(a) Centre of the circle is O.

(b) Three radii of the given circle are: OA, OB and OC.

(c)  Diameter of the circle is AC.

(e) Two points in the interior of the circle are O and P.

(f) Point in the exterior of the circle is Q.

(g) Sector of the circle is AOB (shaded region).

(h) Segment of the circle is ED (shaded region).

2.(a) Is every diameter of a circle also a chord?

(b) Is every chord of a circle also a diameter?

(a) Yes, every diameter of a circle is its longest chord.

(b) No, every chord of a circle is not its diameter.

3.Draw any circle and mark

(f) a point in its interior

(g) a point in its exterior

Required circler can be drawn as follows:

(e) ED in the segment(shaded region)

(f) P is in the interior of the circle.

(g) Q is in the exterior of the circle.

(a) Two diameters of a circle will necessarily intersect.

(b) The centre of a circle is always in its interior.

(a) True; Two diameters of a circle always intersect at the centre of that circle.

Check chapter-wise NCERT Solutions for Class 6 Maths from the links given below:

NCERT solutions for other chapters will be provided here very soon. Check here for the detailed and appropriate solutions.