Download NCERT Solutions for Class 6 Geography Chapter 5 Major Domains of the Earth. These solutions are easy to understand and will help you clear all your doubts. 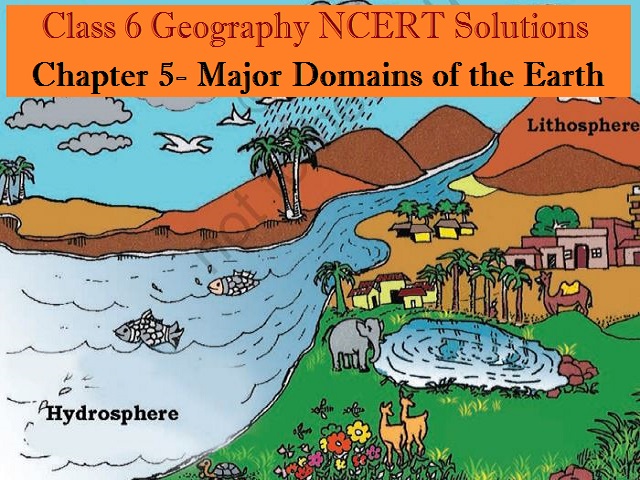 Get here NCERT Solutions for Class 6 Geography Chapter 5 - Major Domains of the Earth to download in PDF format. All the solutions are provided with simple and accurate explanations. These solutions will help you prepare for your exams in an easy and effective manner. You will get here solutions to all questions given at the end of chapter 5 of the latest NCERT Book for Class 6 Geography. Check these NCERT Solutions to boost your learning ability and excel in your studies.

Check below the NCERT Solutions for Class 6 Geography Chapter 5 - Major Domains of the Earth:

(a) What are the four major domains of the earth?

The four major domains of the Earth are:

(b) Name the major continents of the earth.

There are 7 major continents of the earth. They are:

(c) Name the two continents that lie entirely in the Southern Hemisphere.

The two continents that lie entirely in the southern hemisphere are Australia and Antarctica.

(d) Name the different layers of the atmosphere.

There are five different layers of atmosphere. They are:

(e) Why is the earth called the ‘blue planet’?

The earth is called the blue planet because more than 71% of its surface is covered with water. This makes the earth appear blue in colour when seen from space.

(f) Why is the Northern Hemisphere called the Land Hemisphere?

The northern hemisphere is called the Land Hemisphere because a major part of landmass lies in it.

(g) Why is the Biosphere important for living organisms?

The biosphere is the zone where the lithosphere, the hydrosphere and the atmosphere interact with each other. This narrow sphere of the Earth supports life due to the presence of land, water and air. Therefore, the biosphere is important for living organisms.

(a) The mountain range that separates Europe from Asia is

Answer: (i) an Isthmus

(c) The major constituent of the atmosphere by per cent is

(d) The domain of the earth consisting of solid rocks is

(e) Which is the largest continent?

(a) The deepest point on the earth is Mariana Trench in the Pacific Ocean.

(b) The Indian Ocean is named after a country.

(c) The Biosphere is a narrow contact zone of land, water and air that supports life.

(d) The continents of Europe and Asia together are known as Eurasia.

(e) The highest mountain peak on the earth is Mount Everest.

Download all the NCERT Solutions for Class 6 Geography Chapter 5 from the following link: