A total of 1,93,790 candidates have registered for VIT Engineering Entrance Examination (VITEEE) to be held in the form of a Computer-Based Test [CBT] from April 9 to 20, 2014, for admission into the B.Tech. programmes offered by VIT University, Vellore. 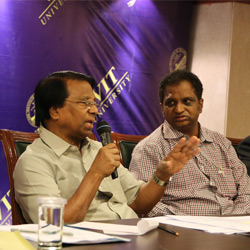 A total of 1,93,790 candidates have registered for VIT Engineering Entrance Examination (VITEEE) to be held in the form of a Computer-Based Test [CBT] from April 9 to 20, 2014, for admission into the B.Tech. programmes offered by VIT University, Vellore.  This year, the CBT would be organized not only in India, but also in Dubai and Kuwait and the number of Entrance Examination Cites (Centre) are 112 Cities (137 Centres).

According to the Founder and Chancellor, Dr G. Viswanathan, the swelling demand for the programmes from students based in these Middle-Eastern countries has led VIT University to branch out. Among the prominent centres in India, Andhra Pradesh tops the chart with 37,298 registrations which includes 29,606 male students. Second on the list is Uttar Pradesh with 28,337 registrations followed by Bihar with 18,861, Maharashtra with 14,801 and Rajasthan with 12,839 and Tamil Nadu with 12,555 registrations.

The Chancellor also added that plus two toppers among students (one boy and one girl) from government schools in rural areas in each district of Tamil Nadu will appearing for VITEEE and secure top marks will be given 100 per cent tuition fee waiver and full exemption from hostel and mess fee under the unique STAR (Supporting the Advancement of Rural Students) programme. “This effort has been made to ensure that high scorers from each district who have poor economic background get their due and are given the best of education,” said the Chancellor.

Disclaimer: The information provided in this Notification is solely by VIT University, Jagranjosh.com bears no representations or warranties of any kind, express or implied, about the completeness, accuracy, reliability, suitability or availability with respect to the information. Individuals are therefore suggested to check the authenticity of the information.