Positives and Negatives of Dropping a Year for Preparation of JEE

In this article we have discussed about the advantages and disadvantages of dropping a year for preparation of JEE. This will really help a lot to JEE aspirants who lost the chance of cracking JEE or got low rank this year in JEE.

There are many students who think its better to concentrate on board exams in class 12th and to prepare for competition exams after class 12th for one year by taking coaching from reputed institute or sometimes  students prepare for both board exam and competitive exams but due to some circumstances their performance is not satisfactory. So, they drop one year to prepare well for next year JEE . So, let’s go through the problems faced by the students in the dropping a year: 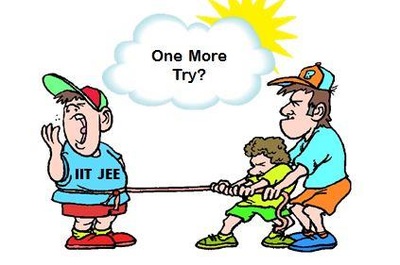 There are pros and cons to everything. Problems may come in dropping one year but that does not mean it is impossible and very much difficult to crack JEE. We have discussed about the problems, now we will discuss the advantages of dropping a year for JEE preparation:

To understand time is not an easy going thing. We don’t know how the next year shapes for us. It might be the year of motivation and you achieve what you dreamt of or might be a year of discouragement.

It is being truly said desire does nothing, but the determination to fulfill that desire does everything.

Future belongs to those who believe in the power of their dreams and with that belief they have perseverance to achieve it!!

How to Start Preparation for JEE 2018 from Class 12th?

5 things you can do after completing your graduation in engineering