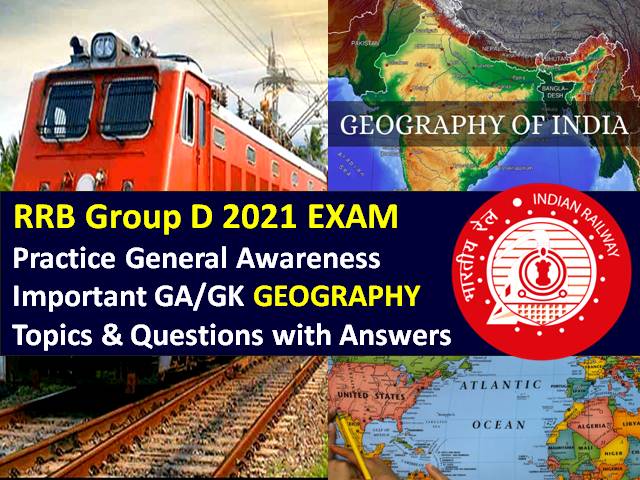 General Awareness/GK is considered to be one of the highest-scoring sections of the RRB Group D 2021 Exam and will be of 20 marks. Let’s look at the important General Awareness/GK - Geography topics that have appeared frequently in RRB GROUP D Exam over the last few years.

1. The new union territory of Ladakh has how many districts?

2. The Hornbill festival is celebrated in

Explanation: The Hornbill festival is celebrated in Nagaland to celebrate their rich cultural heritage.

3. Rouf is the folk dance of which Indian State?

b) Jammu and Kashmir

Explanation: Rouf is the folk dance of Jammu & Kashmir.

Explanation: The 11th BRICS Summit 2019 held in Brazil. The BRICS summit 2019 theme was 'Economic Growth for an Innovative Future'.

5. The state which is the largest producer of tea in India:

Explanation: Tea production in Assam was approximately 702 million kilograms in fiscal year 2019, the highest to any other region in the country.

6. The most prominent distributory of the Ganga river:

7. The southern most part of India:

8. The headquarters of the Theosophical Society in India:

Explanation: In 1882, the headquarters of the Society were established in Adyar, near Madras (now Chennai) in India.

9. Which is not a port on the west coast of India?

Explanation: Paradip Port is a natural, deep-water port on the East coast of India in Jagatsinghpur district of Odisha.

10. The state which is the leading producer of mica:

11. The highest railway bridge is built across the river:

Explanation: The Chenab Bridge is an Indian railway steel and concrete arch bridge under construction between Bakkal and Kauri in the Reasi district of Jammu and Kashmir, India. When completed, the bridge will span the Chenab River at a height of 359 m (1,178 ft) above the river, making it the world's highest rail bridge.

12. The second highest mountain peak in the world:

13. The most densely populated country in the world:

14. The people of which country have longest life span:

Explanation: In 2019, Japan has the highest life expectancy rate.