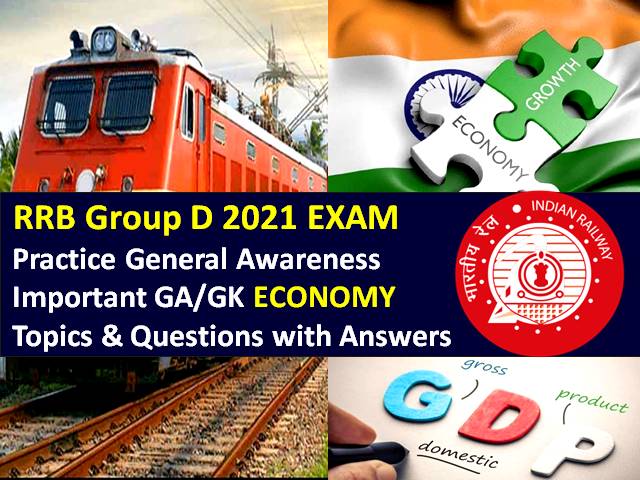 General Awareness/GK is considered to be one of the highest scoring sections of the RRB Group D 2021 Exam and will be of 20 marks. Let’s look at the important General Awareness/GK - Economy topics that have appeared frequently in RRB GROUP D Exam over the last few years.

1. What is the definition of sex ratio?

a) Number of deaths per 1,000 live births of children

2. What is the type of Indian economy?

Explanation: The planners of the Indian Economy adopted the concept of a mixed economy. A mixed economy consists of private and public sectors.

3. Which states of India have the lowest and highest Infant Mortality Rate respectively?

4. Which of the following concept is just opposite to deflation?

5. What is the base year for measuring inflation at wholesale Prices Index (WPI) in India?

Explanation: The new base year for measuring inflation is 2011-12.

Explanation: United Nations (UN) - the inter-governmental bodies play a key role in fostering international cooperation and take concrete action through resolutions and decisions. UNODC acts as the Secretariat to these bodies and provides them with substantive and technical support.

Explanation: The Integrated Guided Missile Development Programme (IGMDP) was an Indian Ministry of Defence programme for the research and development of the comprehensive range of missiles.

8. As per Census of India 2011, the population density was about

9. Who among the following can accept the deposits of money from the public, as a business in financial transactions?

Explanation: Only those NBFCs to which the Bank had given a specific authorisation and have an investment grade rating are allowed to accept/ hold public deposits to a limit of 1.5 times of its Net Owned Funds.

11. SAARC countries are from which part of the world?

12. Who was the author of the Book 'Planned Economy of India'?

Explanation: Mokshagundam Visvesvaraya, was Diwan of Mysore from 1912 to 1918. He received India's highest honour, the Bharat Ratna, in 1955.He wrote a book "Planned Economy for India" in 1934.