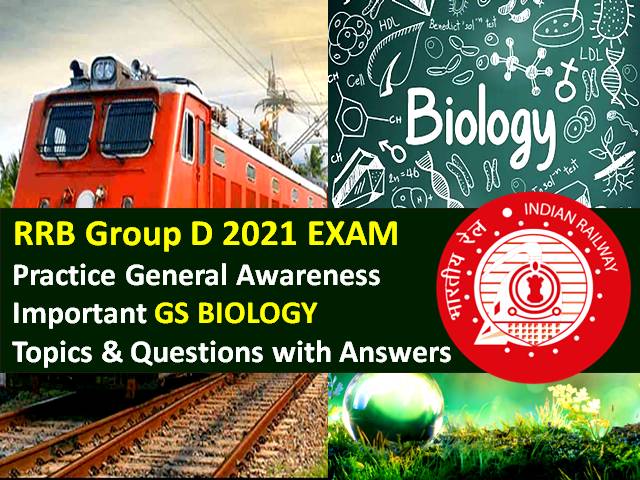 General Science is considered to be one of the highest-scoring sections of the RRB Group D 2021 Exam and will be of 25 marks. Let’s look at the important General Science - Biology topics that have appeared frequently in RRB GROUP D Exam over the last few years.

1. Japanese Encephalitis is spread by:

2. The Characteristic feature of Virus is:

Explanation: The cell they multiply in is called the host cell.

3. Which of the following was the first antibiotic discovered by Alexander Fleming in 1928?

Explanation: In 1928 Alexander Fleming (1881–1955) discovered penicillin, made from the Penicillium notatum mold, but he did not receive the Nobel Prize in Physiology or Medicine for his discovery until 1945.

4. How many bones does a new born human baby have?

5. The bacterial conversion of Nitrogen into Nitrogen Compounds is called:

Explanation: The bacterial conversion of Nitrogen into Nitrogen Compounds is called Nitrogenation.

6. An Ant can see the objects all around it due to the presence of

Explanation: Ants have compound eyes with many units, called ommatidia. Their eyes look like an array of LEDs you'd see in a traffic light (except in a dome shape). Each ommatidium sees one point in space so the whole eye sees one image but different portions of it.

7. What is most common treatment for bacterial infections in humans?

Explanation: Most bacterial diseases can be treated with antibiotics, although antibiotic-resistant strains are starting to emerge.

8. What plant has the scientific name Solanum Tuberosum?

Explanation: The potato is a root vegetable native to the Americas, a starchy tuber of the plant Solanum tuberosum, and the plant itself is a perennial in the nightshade family, Solanaceae.

9. A sudden fall in the Barometric reading indicates:

10. Which one of the following is an enzyme?

Explanation: Trypsin is an enzyme that helps us digest protein.

11. Who is called India’s Child Surgeon?

Explanation: The name of that child is Akrit Jaswal, an Indian child surgeon who performed his first surgery at the age of seven. Akrit Pran Jaswal was born on April 23, 1993, at Nurpur, Himachal Pradesh.

13. Among the following which is the only snake that builds a nest?

Explanation: King Cobra is the only snake in the world that builds a nest.

14. Which of the following disease Is caused by the bite of a mad dog?

Explanation: Hydrophobia is the commonest name and relates to the major symptom.

17. Anaemic condition is due to:

Explanation: Anaemia is a condition in which the number of Red Blood Cells (RBC) or the Haemoglobin concentration within them is lower than normal.

18. The longest cell in the human body is:

Explanation: In the human body, the nerve cell is the longest cell.

19. Group of cells having a common origin and performing similar functions are called:

Explanation: A tissue is a group of cells with a common origin, structure and function.

20. The acid present in the stomach which helps in the digestion of food is:

Explanation: The hydrochloric acid in the gastric juice breaks down the food and the digestive enzymes split up the proteins.