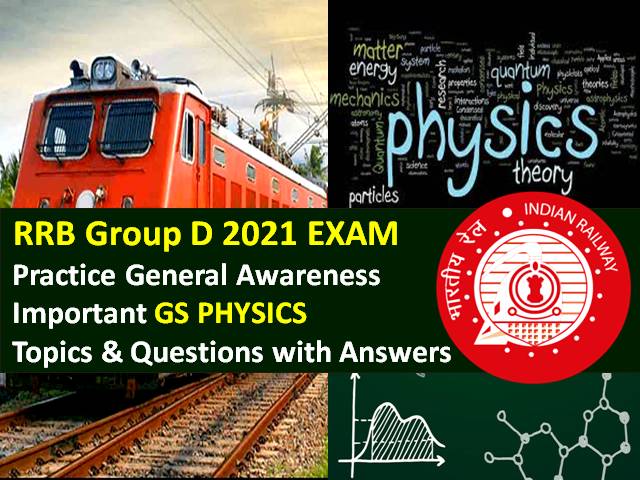 General Science is considered to be one of the highest-scoring sections of the RRB Group D 2021 Exam and will be of 25 marks. Let’s look at the important General Science - Physics topics that have appeared frequently in RRB GROUP D Exam over the last few years.

1. A body is dropped from a certain height above the ground. When it is halfway down, it possesses:

(A) Only Kinetic energy

(B) Only Potential energy

(C) Both Kinetic and Potential energy

(D) Neither kinetic nor Potential energy

(A) Revolution of the Earth

(B) Earth is inclined towards its orbital plane

(C) Rotation of the Earth

3. Which of the following is false?

4. Which of the following coloured light has the lowest frequency?

Explanation: Red has the longest wavelength among the given options.

It is reverse for frequency.

5. A sudden fall in the Barometric reading indicates:

Explanation: Sudden fall in the barometer is an indication of the storm because atmospheric pressure decreases all of a sudden during the storm.

6. “Parsec" is the unit of measurement of:

(A) Density of stars

8. Which one is not a good conductor of electricity?

Explanation: Porcelain is an excellent insulator for use at high voltage.

9. The technology developed to track enemy submarines in World War II was

Explanation: Two similar but different technological advances that figured prominently in the Allied victory in World War II were radar and sonar, both techniques for detecting the location and speed of enemy aircraft or submarines.

10. The first large scale electrical air conditioning was invented and used in 1902 by:

Explanation: Modern air conditioning emerged from advances in chemistry during the 19th century, and the first large-scale electrical air conditioning was invented and used in 1902 by Willis Haviland Carrier.

11. Zero degree centigrade is equal to what degree Fahrenheit?

12. What is the gravitational force exerted on a mass called?

Explanation: The gravitational force exerted on an object near the earth's surface is called the object's weight.

13. The earth conductor provides a path to ground for:

Explanation: To pass the leakage current to the earth.

14. A galvanometer is converted to a voltmeter by:

Explanation: A galvanometer can be converted into a voltmeter by connecting a high resistance called multiplier in series to the galvanometer.