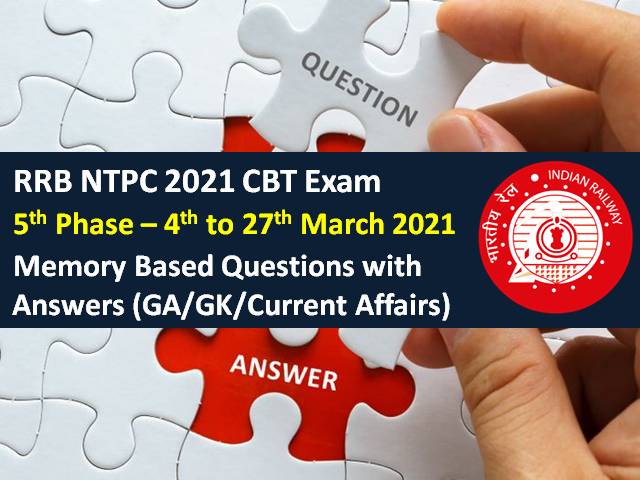 RRB NTPC 2021 Exam (Phase-5) Memory Based General Awareness (GA) Questions with Answers: RRB NTPC 2021 Phase-5 CBT Exam has been commenced from 4th March and will be conducted till 27th March 2021 for around 19 lakh candidates across different exam centres in India. Computer Based Test (CBT) is being conducted for the recruitment of RRB Non-Technical Popular Categories (NTPC) 35281 Vacancies (Graduate & Under-Graduate Posts) in two shifts.

In this article, we are going to share the important memory-based General Awareness, General Knowledge and Current Affairs Questions as per the feedback received by the candidates who have appeared for RRB NTPC 2021 Online Exam. Candidates are advised to definitely cover these questions for scoring high marks in the Exam.

Let’s have a look at the Important Questions that are being covered in the RRB NTPC 2021 Exam:

Answer: DescriptionMundra Thermal Power Station is located at Mundra in Kutch district in the Indian state of Gujarat.

Cannes film Festival is conducted in which country?

National Institute of Nutrition is located in:

Satyashodhak Samaj was established by:

Which planet is the farthest from Sun?

Belgaum is located in which State?

Answer: SWIFT is an acronym for Society for Worldwide Interbank Financial Telecommunication

What was the name of Mahatma Gandhi’s Mother?

Dwarka Mandir is located at the banks of which river?

Interest is not given on which type of Bank account?

Answer: Current account does not earn any interest on the money deposited.

Which river is also known as Ganga of South India?

Shashi Tharoor is the Member of Parliament, Lok Sabha from which constituency?

Answer: Hydrogen sulfide (H2S) is a colourless gas with a characteristic odour of rotten eggs which being denser than air may pool in low areas in still conditions.

Hertz is the measurement unit of?

Answer: The hertz (symbol: Hz) is the SI unit of frequency

Panchavati Pilgrimage is located in which State?

Rani ki Vav is in:

Answer: Rani ki Vav or Ranki vav ('Queen's stepwell') is a stepwell situated in the town of Patan in Gujarat state of India.

Who was the first Ruler of Delhi during Sayyid Dynasty?

Von Karman Award 2020 has been given to:

In 2020, who has been appointed as State Bank of India's Managing Director?

Pongal Festival is from which State?

Headquarters of Union Bank of India:

Brihadishvara Temple is located in:

Answer: It is located on the south side of Kaveri river in Thanjavur in the Indian state of Tamil Nadu.

1857 Revolution was started from which place?

Panini has written which book?

Answer: Ashtadhyayi is a Sanskrit treatise on grammar written

In 2019, who became the youngest captain to win a Test Cricket Match?

Answer: Rashid Khan became the youngest-ever Test captain in the history of cricket.

Which is the most populated City as per 2011 Census of India?

In 2019, Pravasi Bhartiya Divas was held:

Answer: In 2019, Pravasi Bhartiya Divas was held on 21-23 January in Varanasi, Uttar Pradesh.

In 2007, Tata Group made which Super Computer?

Answer: EKA (the Sanskrit name for number one), the supercomputer was built at the CRL facility at Pune.

In a Galaxy, core structure of a comet is known as:

Mountains generated due to landslides?

Answer: Fold mountains are created where two or more of Earth's tectonic plates are pushed together.

Which cricketer was given Padma Bhushan in 2018?

Answer: Modern keyboards matching US conventions typically have 104 keys while the 105 key layout is the norm in the rest of the world.

COBOL & Fortran are which generation Languages?

Answer: Lagrangian point 1 (L1) - Aditya-L1 is a spacecraft mission to study the Sun.

Tomb of Akbar is located in:

Under which scheme 100 Days Guaranteed Employment is given:

2. Who was the First Woman Railway Minister of India?

3. Indian Railways has been divided into how many zones?

Answer: 17 - For administrative purposes, Indian Railways is divided into 17 Zones.

4. World Arthritis Day is observed on:

5. Who was the President of Indian Constitutent Assembly after Independence? (REPEATED)

6. Which Indian State is the largest producer of Cotton?

Answer: Gujarat is the largest cotton producing state in India with a production of 125 Lakh Bales.

7. Which Indian State is the largest producer of Black Pepper?

8. Bhavai Dance Form is from:

Answer: Bhavai is a genre of folk dance popular in Rajasthan state in western India.

9. Which country’s Parliament Knesset officially dissolved after a failure to come to a budget agreement?

Answer: Israel - Knesset is the unicameral national legislature of Israel. On 23 December 2020, the Knesset officially dissolved after a failure to come to a budget agreement and will not be restored until a new election is held.

Answer: 120 Days - When matured, in a healthy individual these cells live in blood circulation for about 100 to 120 days.

11. Partition of Bengal occurred in:

13. Kathakali Dance Form is from:

14. Indian Railways was founded in:

16. Who started Self-Respect Movement in India?

Answer: S. Ramanathan - It was founded in 1925 by S. Ramanathan who invited E. V. Ramasamy (also known as Periyar by his followers) to head the movement in Tamil Nadu, India against Brahminism.

17. What is required for Photosynthesis?

18. Only Temple of Brahma is located in:

19. Who is known as the Missile Man of India?

21. Dhauladhar Range belongs to which part of Himalaya?

Answer: The Dhauladhar range (lit. The White Range) is part of a lesser Himalayan chain of mountains. It rises from the Indian plains to the north of Kangra and Mandi. Dharamsala, the headquarters of Kangra district, lies on its southern spur in above the Kangra Valley, which divides it from Chamba.

22. Who has the Interim Right to make a Law in India?

Answer: All bills passed by the parliament can become laws only after receiving the assent of the president per Article 111.

Answer: The Sone originates near Amarkantak in Anuppur district of Madhya Pradesh.

Answer: the first hour of a sitting of Lok Sabha is devoted to the Questions and this hour is called the Question Hour. (11 am to 12 noon)

25. Who was the Viceroy of India during Dandi March?

1. Durand Line is between which countries?

2. Directive Principles of State Policy has been adopted from:

Answer: The framers of the Indian Constitution borrowed the idea of Directive Principles of State Policy from the Constitution of Irish Republic.

4. Who was the President of the Indian Constituent Assembly after Independence?

Answer: all subscribing workers below the age of 40 are eligible for pension of up to ₹5,000 (US$70) per month on attainment of 60 years of age. The minimum eligible age for a person joining APY is 18 years and the maximum is 40 years. was launched by Prime Minister Narendra Modi on 9 May 2015.

9. Who are not the members of BIMSTEC?

Answer: The Bay of Bengal Initiative for Multi-Sectoral Technical and Economic Cooperation (BIMSTEC) is a regional organisation that comprises of seven member states adjacent to the Bay of Bengal. BIMSTEC came into existence on June 6, 1997 through the Bangkok Declaration. It is located in Dhaka, Bangladesh. It constitutes seven member states: five deriving from South Asia, including Bangladesh, Bhutan, India, Nepal, Sri Lanka, and two from Southeast Asia, including Myanmar and Thailand.

10. Headquarters of UNO is located in:

11. Which of the following is used as fuel in the rocket?

Answer: Most liquid chemical rockets use two separate propellants: a fuel and an oxidizer. Typical fuels include kerosene, alcohol, hydrazine and its derivatives, and liquid hydrogen. Many others have been tested and used. Oxidizers include nitric acid, nitrogen tetroxide, liquid oxygen, and liquid fluorine.

12. India and France have signed on which memorandum?

Answer: The Union Cabinet, chaired by Prime Minister Narendra Modi was apprised of the signing of Memorandum of Understanding (MoU) between India and French Republic in the field of renewable energy cooperation. The MoU was signed in January 2021.

13. Which of the following has an equal number of electrons and protons?

Answer: Deuterium also known as heavy hydrogen is one of the two stable isotopes of hydrogen. The nucleus of deuterium called deutron contains one proton and neutron.