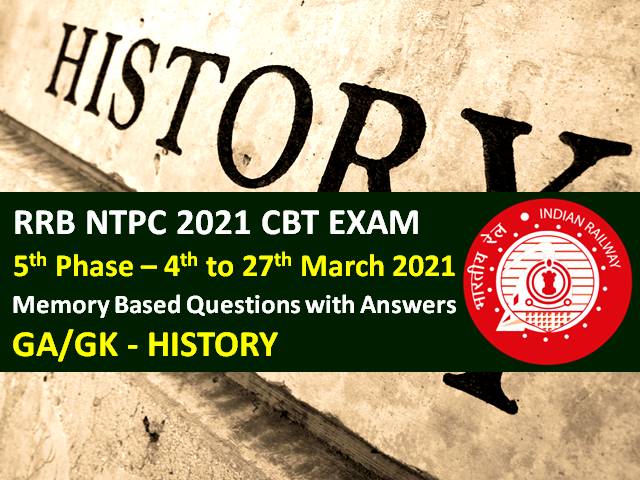 RRB NTPC 2021 Exam (Phase-5) Memory Based History Questions with Answers: RRB NTPC 2021 Phase-5 CBT has been commenced from 4th March 2021 and will be conducted till 27th March 2021 for around 19 lakh Candidates across different exam centres in India. Computer Based Test (CBT) is being conducted for the recruitment of RRB Non-Technical Popular Categories (NTPC) 35281 Vacancies (Graduate & Under-Graduate Posts) in two shifts.

In this article, we are going to share the important memory based General Awareness (GA)/General Knowledge (GK) - History Questions as per the feedback received by the candidates who have appeared for RRB NTPC 2021 Online Exam. Candidates are advised to definitely cover these questions for scoring high marks in the Exam. Let’s have a look at the Important Questions that are being covered in the RRB NTPC 2021 Exam:

1. 1857 Revolution was started from which place?

2. Panini has written which book?

Answer: Ashtadhyayi is a Sanskrit treatise on grammar written

4. Tomb of Akbar is located in:

5. Who was the President of Indian Constitutent Assembly after Independence?

6. Partition of Bengal occurred in:

7. Indian Railways was founded in:

8. Who started Self-Respect Movement in India?

Answer: S. Ramanathan - It was founded in 1925 by S. Ramanathan who invited E. V. Ramasamy (also known as Periyar by his followers) to head the movement in Tamil Nadu, India against Brahminism.

9. Who was the Viceroy of India during Dandi March?

11. Satyashodhak Samaj was established by:

12. Who was the first Ruler of Delhi during Sayyid Dynasty?