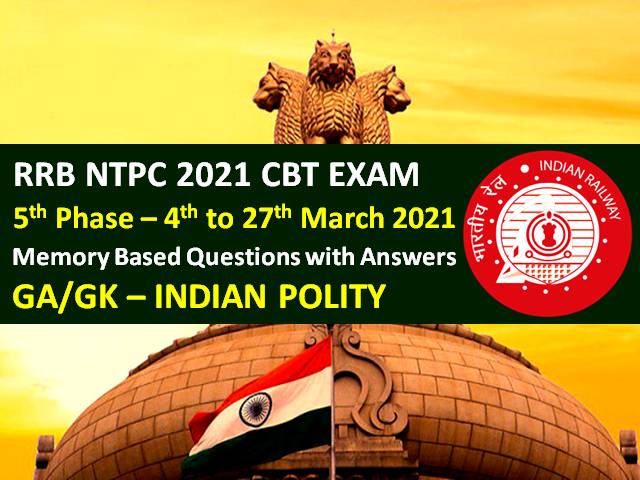 RRB NTPC 2021 Exam (Phase-5) Memory Based Indian Polity Questions with Answers: RRB NTPC 2021 Phase-5 CBT has been commenced from 4th March 2021 and will be conducted till 27th March 2021 for around 19 lakh Candidates across different exam centres in India. Computer Based Test (CBT) is being conducted for the recruitment of RRB Non-Technical Popular Categories (NTPC) 35281 Vacancies (Graduate & Under-Graduate Posts) in two shifts.

In this article, we are going to share the important memory-based General Awareness (GA)/General Knowledge (GK) - Indian Polity Questions as per the feedback received by the candidates who have appeared for RRB NTPC 2021 Online Exam. Candidates are advised to definitely cover these questions for scoring high marks in the Exam. Let’s have a look at the Important Questions that are being covered in the RRB NTPC 2021 Exam:

2. Shashi Tharoor is a Member of Parliament, Lok Sabha from which constituency?

3. Which Article of the Indian Constitution includes Directive Principles?

Answer: Articles 36-51 under Part-IV of the Indian Constitution deal with Directive Principles of State Policy (DPSP).

5. Under which scheme 100 Days Guaranteed Employment is given:

6. Who was the President of Indian Constituent Assembly after Independence?

7. Who has the Interim Right to make a Law in India?

Answer: All bills passed by the parliament can become laws only after receiving the assent of the president per Article 111.

Answer: the first hour of a sitting of Lok Sabha is devoted to the Questions and this hour is called the Question Hour. (11 am to 12 noon)

9. Directive Principles of State Policy has been adopted from:

Answer: The framers of the Indian Constitution borrowed the idea of Directive Principles of State Policy from the Constitution of Irish Republic.

Answer: all subscribing workers below the age of 40 are eligible for pension of up to ₹5,000 (US$70) per month on attainment of 60 years of age. The minimum eligible age for a person joining APY is 18 years and the maximum is 40 years. was launched by Prime Minister Narendra Modi on 9 May 2015.

11. Who are not the members of BIMSTEC?

Answer: The Bay of Bengal Initiative for Multi-Sectoral Technical and Economic Cooperation (BIMSTEC) is a regional organisation that comprises of seven member states adjacent to the Bay of Bengal. BIMSTEC came into existence on June 6, 1997 through the Bangkok Declaration. It is located in Dhaka, Bangladesh. It constitutes seven member states: five deriving from South Asia, including Bangladesh, Bhutan, India, Nepal, Sri Lanka, and two from Southeast Asia, including Myanmar and Thailand.

12. India and France has signed on which memorandum?

Answer: The Union Cabinet, chaired by Prime Minister Narendra Modi was apprised of the signing of Memorandum of Understanding (MoU) between India and French Republic in the field of renewable energy cooperation. The MoU was signed in January 2021.