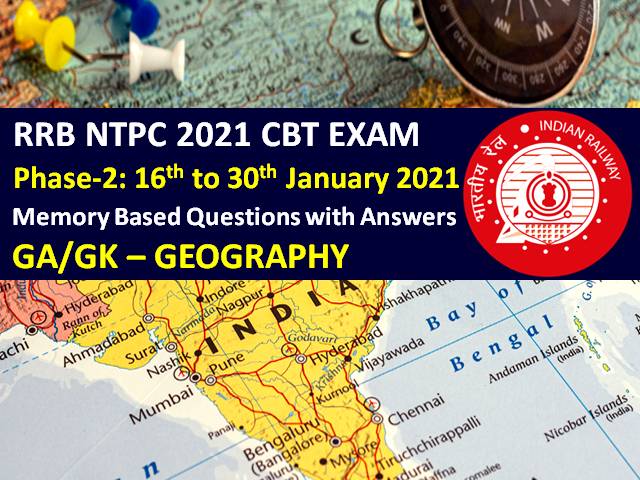 RRB NTPC 2021 Exam (Phase-2) Memory Based Geography Questions with Answers: RRB NTPC 2021 Phase-2 CBT Exam has been commenced from 16th January 2021 and will be conducted till 30th January 2021 for around 27 lakh Candidates across different exam centres in India. Computer Based Test (CBT) is being conducted for the recruitment of RRB Non-Technical Popular Categories (NTPC) 35281 Vacancies (Graduate & Under-Graduate Posts) in two shifts.  RRB NTPC 2021 Phase-3 Exam will be conducted from 31st Jan to 12th Feb 2021 for around 28 Lakh candidates.

In this article, we are going to share the important memory based General Awareness (GA)/General Knowledge (GK) - Geography Questions as per the feedback received by the candidates who have appeared for RRB NTPC 2021 Online Exam. Candidates are advised to definitely cover these questions for scoring high marks in the Exam. Let’s have a look at the Important Questions that are being covered in the RRB NTPC 2021 Exam:

1. Black Pagoda is located in:

4. Which dam is built on Narmada river?

5. Where is the Marine National Park located?

6. Jantar Mantar is located in:

Answer: The AGMARK Head Office at Faridabad (Haryana) is legally enforced in India by the Agricultural Produce (Grading and Marking) Act of 1937 (and amended in 1986)

9. Pattiseema Lift Irrigation Project is part of which river?

10. Indira Gandhi Centre for Atomic Research (IGCAR) is in:

12. Which of the following states does not share a boundary with Nepal?

Answer: The Red Data Book is the state document established for documenting rare and endangered species of animals, plants and fungi as well as some local sub-species that exist within the territory of the state or country

14. How many Nuclear Power Plants are there in India?

15. What connects the Pacific Ocean to the Atlantic Ocean?

16. Taklamakan Desert is in:

Answer: The Taklamakan Desert is a desert in Southwest Xinjiang in Northwest China

Answer: The Gulf Stream is a powerful, warm, and swift Atlantic Ocean current that originates at the tip of Florida, and follows the eastern coastlines of the United States and Newfoundland before crossing the Atlantic Ocean.

18. Maximum no of tigers are found in which national park?

20. Keoladeo National Park is located at?

21. Victoria Falls is on which river?

22. Longest Railway Line is in which State of India?

23. Which states are connected by golden triangle tourism?

24. Which railway line is parallel to Arabian Sea?

Answer: Konkan Railways - The Konkan Railways passes through 3 states of India – Goa, Maharashtra and Karnataka. It runs along the Indian west coast parallel to Arabian Sea and Western Ghats.

25. Kuna is the currency of which country?

26. Who gave the term Geography?

Answer: Eratosthenese - The term geography was first coined by Eratosthenese, a Greek scholar (276-194 BC.). The word has been derived from two roots from Greek language geo (earth) and graphos (description).

27. Hornbill festival is celebrated in which Indian State?

28. Which is the longest national highway?

Answer: Srinagar in the north and ends in Kanyakumari in the south

30. Which city is called the city of pearls?

31. Where is the headquarters of UN?

32. Where is the United Nations University Located?

33. Headquarters of International Court of Justice:

Answer: Hague - The International Court of Justice, also known as the World Court, is the main judicial organ of the UN. It was established in June 1945 by the Charter of the United Nations and began work in April 1946. The seat of the Court is at the Peace Palace in The Hague (Netherlands).

34. Which of the following countries does not share a land boundary with India?

35. According to census 2011 which state has the lowest population density?