In this article you will get the clue that from where and how the questions are being framed from the chapter Sources of Energy .The experts of jagranjosh.com have full confidence that you will not miss any of the questions in the board exam as well as in competitive exams from this chapter if you will keep the following terms / question in your mind while studying

• Why is Uranium a non renewable source of energy?
• Using wood as a source of energy is not wise decisions explain?
• Characteristics of good source of energy?
• How do we measure usefulness of fuel?
• Hydrogen has the highest calorific value. Explain
• Characteristics of a goo fuel
• The calorific value and ignition temperate of fuel A are 55 Kj/g and 20 degree C respectively. These values for another fuel B are 50 Kj/g and 80 degree C respectively. Which of the two would be more ideal fuel if, on burning, the fuel A produces CO2, SO2 and SO3 as by products while the fuel B produces CO2 and H2O? Give two reasons in support of your answer.
• The calorific value of cooking gas (LPG) is 50 Kj/g. what does it mean?
• Coal is said to be formed from the woods of tree. Why then is coal considered to be a non- renewable source of energy where as wood is a renewable source of energy.
• Can petroleum be used as a fuel in its natural form?
• LPG and its advantages
• Explain in detail about natural gas. Why is it considered a good fuel?
• Advantages of Natural Gas
• Explain with the help of diagram the working of thermal power plant
• Disadvantages of Fossil fuel
• Name of fractions obtained from petroleum
• If you could use any source of energy for heating your food, which would it be and why?
• How is leakage of LPG detected easily? State the steps to be taken in case its leakage is detected in the kitchen.
• Explain the principle of working of hydro power plant.
• Advantages and disadvantages of generating hydroelectricity
• What is wind electric generator? Explain with the help of diagram.
• What is solar constant and its value
• Working of solar cooker with the help of diagram
• Difference between thermal power plant and hydro power plant.
• Compare sun and fossil fuel as a source of energy.
• Why solar box is painted black from inside
• In many applications, solar cells are connected to rechargeable batteries. Why is it so?
• Hydroelectric power is a renewable source of energy. Explain
• Wind generator, explain with the help of diagram
• The traditional use of fuel has many disadvantages. Explain
• Charcoal is a better fuel than wood. Explain
• How is charcoal prepared?
• Explain anaerobic degradation
• Bio Gas is not a single gas. Explain
• Working of Bio gas plant with the help of diagram.
• Tidal energy is not likely to be a potential source of energy. Explain.
• How can the energy of sea- wave be used to generate electricity?
• Ocean thermal energy (OTE), how can OTE be converted as a usable form of energy.
• Advantages of using geothermal energy.
• Agent that decomposes animal dug into biogas.
• Nuclear Fission, how is it carried out?
• Nuclear fission reaction with the help of equation
• Explain the working of nuclear power plant with the help of diagram
• In which form is the energy released from nuclear reaction expressed.
• Value of atomic mass unit in terms of energy.
• What is nuclear fuel in sun? Process through which energy is released in sun with the help of equation.
• Advantages and disadvantages of nuclear fusion reaction
• The mass number of four different elements A, B, C and D are 2, 35, 135 and 239 respectively. Which of them would provide the most suitable fuel for?
1. Nuclear fission
2. Nuclear fusion
• Isotope of uranium that produces the energy in the fuel rod
• Function of boron rod in nuclear reactor
• Why is liquid sodium pumped into the reactor?
• How is the working of nuclear reactor of a power plant shut down in an emergency?
• Factors to keep in mind while choosing the source of energy.
• Steps to reduce energy consumption?
• reasons why construction of Tehri Dam on river Ganga and Sardar  Sarovar project on river Narmada is opposed by local people and environmentalist?

Q1. Which of the following sources of energy is NOT renewable?

Q2. Both lignite and anthracite are forms of

Q3. In a hydroelectric power plant more electrical power can be generated if water falls from a greater height because:

a. its temperature increases.
b. larger amount of potential energy is converted into kinetic energy.
c. the electricity content water increases with height
d. more water molecules dissociate into ions.

a. We are encouraged to plant more trees so as to ensure clean environment and also provide bio-mass fuel.
b. Gober-gas is produced when crops,vegetable wastes etc.,decompose in the absence of oxygen.
c. The main ingredient of bio-gas is ethane and it gives a lot of smoke and also produces a lot of residual ash.
d. Bio-mass is a renewable source of energy.

Q5. Kindling temperature is the:

Q7. The most widely used fuel at the US electric plants is

Q8. The radiation in the sunlight that gives us the feeling of hotness is

Q9. Which of the following fuels would be used for a barbecue?

Q10. The diagram summarizes four stages for a way of producing electricity. Which of the following matches stage 2? 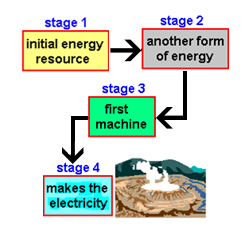