Staff Selection Commission conducts Combined Graduate Level Exam for the recruitment to the different Group ‘B’ and Group ‘C’ posts. Jagranjosh.com has come up with SSC CGL Exam (Tier-I):

Staff Selection Commission conducts Combined Graduate Level Exam for the recruitment to the different Group ‘B’ and Group ‘C’ posts. Jagranjosh.com has come up with SSC CGL Exam (Tier-I): Reasoning: Ratio and Proportion: Concepts & Free Online Practice Set. Here, we provide concepts along with Free Online Practice Set to make the ease of students in cracking Ratio and Proportion questions in exam.

Ratio is the relation which one quantity bears to another of the same kind. The ratio of two quantities a and b is the fraction a/b and we write it as a: b.

In the ratio a: b, we call a as the first term or antecedent and b, the second term or consequent.

Note: The multiplication or division of each term of a ratio by the same non- zero number does not affect the ratio.

Example2. If we divide 4185 into two parts such that they are in ratio 7:2, then find the values of both the parts?

The ratio of first , second and third quantities is given by

If the ratio between first and second quantity is a:b and third and fourth is c:d . 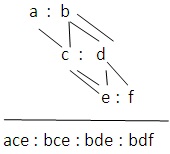 Proportion
Introduction:-
Four quantities are said to be proportional if the two ratios are equal i.e.

the A, B, C and D are proportion. It is denoted by “::” it is written as A : B : C : D where A and D are extremes and B and C are called means .
Product of the extreme = Product of the means
Direct proportion: - The two given quantities are so related that if one quantity increases (or decreases) then the other quantity also increases (or decreases).

Sol 1. It is seen that if number of pens increases then cost also increases. So,

Inverse proportion: - The two given quantities are so related that if one quantity increases (or decreases) then the other quantity also decreases (or increases).

Sol 2. Here if men increase then days should decrease, so this is a case of inverse proportion, so

Rule of three: It Is the method of finding 4th term of a proportion if all the other three are given, if ratio is a:b :: c:d then ,

The word allegation means linking. It is used to find:

1. The proportion in which the ingredients of given price are mixed to produce a new mixture at a given price.

2. The mean or average value of mixture when the price of the two or more ingredients and the proportion in which they are mixed are given. 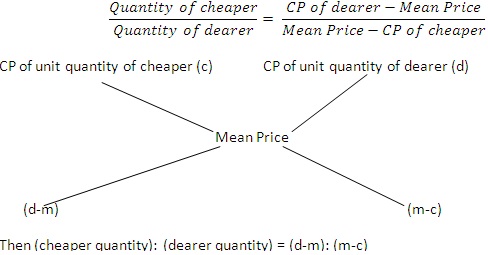 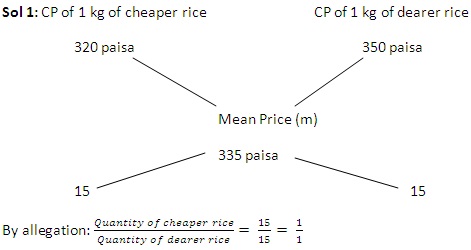 Hence they must be mixed in equal proportion i.e. 1:1

From the above rule: we have,