Practicing Mock Tests can help you in many ways in your exam preparation. So, continue your preparation for English Language and Comprehension Section with this 3rd Mock Test. 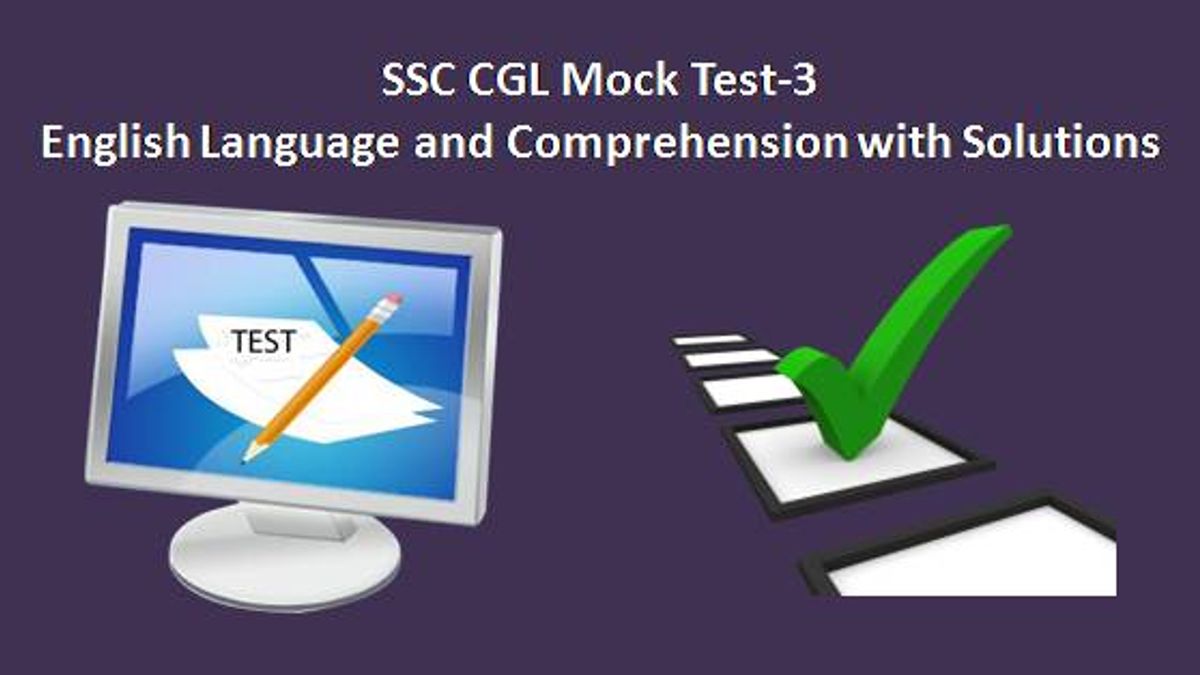 English Language and Comprehension can become one of the high scoring sections in SSC CGL Tier-I Exam, if practiced well. For your practice, we have designed mock papers which will test your understanding of English Grammar alongwith Comprehension Skills.

We have covered the following three major categories of English Language and Comprehension Section in this mock test:
1. Vocabulary
2. Grammar
3. Comprehension

So, let’s start the practice with the 3rd English Language and Comprehension Mock Test. You must try to finish all the 25 questions within 10 minutes time duration. After attempting all the questions, you can assess your performance by checking answers alongwith their solutions given latter in this article.

2. In the following question, the first word is given in capital letters followed by four other words, one of which is the antonym of the first word. Find the word.
DEMURRAL
a) Postponement
b) Impediment
c) Adjournment
d) Furtherance

Directions (3 - 5): The following sentences can be replaced with one word from the options given below them. Choose the correct word and mark as your answer.

3. A place where dead bodies are kept for identification
a) Hospital
b) Morgue
c) Dispensary
d) Clinic

4. The act of intentionally killing oneself
a) Homicide
b) Genocide
c) Regicide
d) Suicide

5. A home for children without parents
a) Homage
b) Orphanage
c) Residence
d) Nursery

Directions (6 – 9): Choose the option that completes the sentence most meaningfully and appropriately.

6. They recognise that problems that were too big to crack in the past can now be solved precisely because of ____________, algorithms and sensors.
a) Amortization
b) Digitization
c) Initialization
d) Localization

7. According to the last population _____________, globally India has the largest illiterate population.
a) Agreement
b) Economy
c) Census
d) Consensus

8. A transparent regulatory environment, clarity on applicability of existing tax Laws, less ____________ by State and minimum restriction or regulation are the key takeaways from the Startup launch.
a) Interference
b) Aid
c) Help
d) Fund

9. A Limited Liability Partnership, popularly known as LLP combines the advantages of both the Company and Partnership into a single form of organization and offers a ____________ structure.
a) Homogeneous
b) Concentration
c) Separated
d) Hybrid

Directions (10 - 12): Each of the following sentences is divided in to four parts. Any of the parts may contain an error. Select the part that has an error. Select option (d), if you find no error in the sentence. Ignore punctuation errors if any.

13. Which of the following spellings is correct?
a) Pnemonia
b) Neumonia
c) Pneumonia
d) Pneimonia

Directions (14 - 18): In the following questions each sentence has an underlined part that can be improved by replacing the part with one among the four options given below. Choose the correct option and if you think no improvements can be made, then select (d) as your answer.

14. If I wasn't in the middle of a party, I will be happy to visit you.
a) Would be
b) Would have been
c) Should have been
d) No correction required

15. Manish is fast as or perhaps faster than Suresh.
a) Almost as fast
b) As fast
c) Equally fast
d) No correction required

16. The great scientist said that the earth revolved around the sun.
a) Has been revolving
b) Is revolving
c) Revolves
d) No correction required

17. She has been growing weaker and her life now hangs like a thread.
a) Hangs by a thread
b) Hangs with threads
c) Hung on a thread
d) No correction required

Directions (19 - 20): The following sentences have a certain phrase highlighted in bold. Choose the correct phrase from the options given below to replace the highlighted phrase and make it grammatically correct. Ignore punctuation errors if any.

20. He is transferred to Calcutta, where is his native place.
a) While in
b) That is
c) What is
d) At his

Directions (21 - 25): Read the following passage carefully and answer the questions that follow:

That the global economy is slowing down is an understatement. This is more so when much of the world economic activity’s fulcrum is oil. With oil prices falling below $28 per barrel and set to drop further — some suggest they could fall as low as $10 a barrel. The reason? Iran, a major oil producer, just free from sanctions imposed by the US, is all set to boost its crude output. The country has announced that it will increase its crude output by 500,000 barrels a day. With this, the global crude oil market is set for a glut and consequent collapse in oil prices.

Experts point to China as one of the main reasons for the slow down. The dragon economy has become a drag on the global economy. Growth slowed down to 6.9 per cent after the fourth quarter slowed to 6.8 per cent last year. This was exacerbated by a huge outflow of capital, a slide in the Yuan currency and stock market crashes. With many of the markets riding piggyback on the Chinese economy, demand fell everywhere and impacted the world economy at large. The latest forecast by the International Monetary Fund (IMF) cut its global growth forecast for 2016 at 3.4 per cent, down 0.2 per cent but put India’s projected growth at 7.5 per cent, up from 7.3 per cent last year. So, as the dragon slows down, it could be the time of the resurgent tiger, cranked up by low oil prices.

25. Which of the following statement is incorrect according to the passage?
a) The oil prices are falling below $28 per barrel.
b) There has been growth in the Yuan currency.
c) International Monetary Fund (IMF) cut its global growth forecast for 2016 at 3.4%.
d) Iran announced that it will increase its crude output by 500,000 barrels a day.

1. Answer: c)
Explanation: Both ‘Cantankerous’ and ‘quarrelsome’ means someone bad-tempered, argumentative, and uncooperative.

2. Answer: d)
Explanation: Demurral means deferment or interruption of something and ‘Furtherance’ is the exact opposite word.

3. Answer: b)
Explanation: Morgue means a place where dead bodies are kept until identified and claimed or until arrangements for burial have been made.

4. Answer: d)
Explanation: Suicide is the act of intentionally causing one's own death.

5. Answer: b)
Explanation: Orphanage is the residential institution for the care and education of orphans.

6. Answer: b)
Explanation: As per the meaning of the sentence, the word ‘Digitization’ which means ‘process of converting information into a digital format’ fits in the blank.

7. Answer: c)
Explanation: As per the meaning of the sentence, the word ‘Census’ which means ‘an official count or survey, especially of a population’ fits in the blank.

8. Answer: a)
Explanation: As per the meaning of the sentence, the word ‘Interference’ which means ‘the act or an instance of hindering, obstructing, or impeding’ fits in the blank.

9. Answer: d)
Explanation: As per the meaning of the sentence, the word ‘Hybrid’ which means ‘a thing made by combining two different elements’ fits in the blank.

14. Answer: b)
Explanation: The grammatically correct sentence would be “If I wasn't in the middle of a party, I would have been happy to visit you”.

15. Answer: b)
Explanation: The grammatically correct sentence would be “Manish is as fast or perhaps faster than Suresh”.

16. Answer: c)
Explanation: The grammatically correct sentence would be “The great scientist said that the earth revolves around the sun”.

17. Answer: a)
Explanation: The grammatically correct sentence would be “She has been growing weaker and her life now hangs by a thread”.

18. Answer: c)
Explanation: The grammatically correct sentence would be “There is a dearth of women constables in our state”.

19. Answer: d)
Explanation: The grammatically correct phrase would be “You will be rewarded, only if you deserve it.”

20. Answer: b)
Explanation: The grammatically correct phrase would be “He is transferred to Calcutta, that is his native place.”

21. Answer:  b)
Explanation: The first paragraph clearly states that the oil prices may fall to $10 a barrel in future as Iran, a major oil producer is all set to boost its crude output.

22. Answer:  c)
Explanation: The word ‘Glut’ means an excessively abundant supply of something.

23. Answer:  b)
Explanation: The second paragraph clearly states that drop in Chinese economy is one of the main reasons for the global economic slowdown.

24. Answer:  b)
Explanation: The word ‘exacerbate’ means to make something that is already bad even worse.

25. Answer: b)
Explanation: The second paragraph clearly states that the Chinese economy suffered more by a huge outflow of capital, a slide in the Yuan currency and stock market crashes. Hence, option b) is incorrect.

The difficulty level of the above mock test was ranging between easy to moderate level and a good score would lie between 18 to 22 marks. Don’t stop your practice until you achieve efficiency and accuracy. Try another mock test here – English Language and Comprehension Mock Test.