Practicing Mock Tests can help you in many ways in your exam preparation. So continue your preparation for General Awareness (GA) and General Knowledge (GK) Section with this 3rd Mock Test. 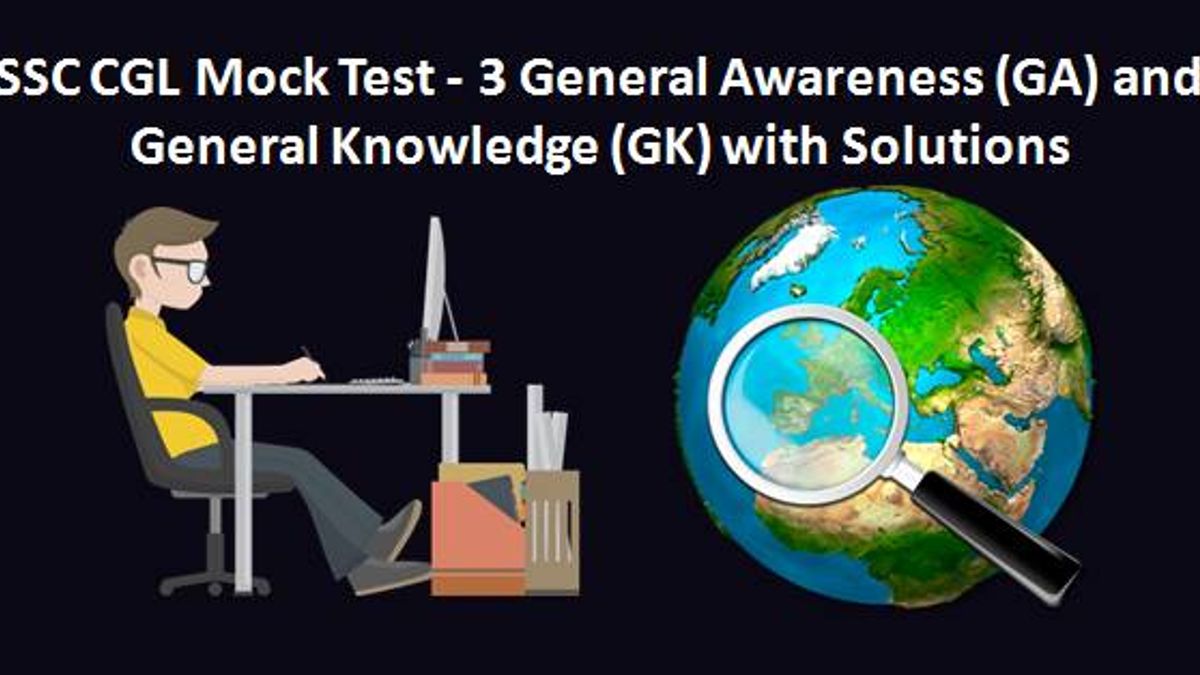 General Awareness (GA) and General Knowledge (GK) section is considered to be one of the high scoring sections of SSC CGL Exam and constitutes 25% of the total score in Tier-I Exam. With good preparation and practice, you can attempt more questions in less time and score good marks in GA and GK Section. Chances of getting negative marks are also quite meagre in this section. For your practice, we have designed mock papers which will test your general awareness and knowledge of current affairs occurring around the world and in India.

We have covered the following four major categories of GA and GK Section in this mock test:

So, let’s continue the practice with the 3rd GA and GK Mock Test. You must try to finish all the 25 questions within 10 minutes time duration. After attempting all the questions, you can assess your performance by checking answers alongwith their solutions given latter in this article.

1. Who among the following was the police officer during Vedic period?

2. Which one of the only regions of the Shivaliks to preserve its flora and fauna?

3. Which of the following is not part of Himalayan Ranges?

4. Which of the following is not the loftiest mountain peak of the Himalayas Mountain?

5. Which city is hosting Organization of the Petroleum Exporting Countries (OPEC) Forum 2018?

6. Which among the following heritage places have been adopted under ‘Adopt a Heritage’ scheme?

7. Who was the revenue collector during Vedic period?

9. Which G7 country has legalised the recreational use of marijuana nationwide?

11. Name the blood vessel which carries blood back to the heart?

12. What was the term used for the treasurer during Vedic period?

13. Transportation of food in plants takes place through:

14. Which salt is used as a raw material for making a large number of useful chemicals in industry?

15. After wound or cut in a body blood coagulates through:

16. Name the salt when on dissolving in water give an acidic solution?

17. When the same pattern of solar eclipse repeats every 18 years 11 days 8 hours are known as:

18. Bleaching powder is formed by treating chlorine with.......

a) It is total solar eclipse.

b) It is partial lunar eclipse with red glow

c) It is total lunar eclipse with deep red glow

20. Which of the following statements is not correct?

a) The first five year plan was launched from 1st April, 1951

b) Dr. Rajendra Prasad was the first chairman of the Planning Commission of India

21. During lunar eclipse, the visible red colour is because of:

a) Dust in space

b) Dust in moon’s atmosphere

22. Which states of India have the lowest and highest Infant Mortality Rate respectively?

23. How inflation affects the price of the commodities?

a) Price of the commodities decreases

b) Price of the commodities increases

25. Which of the following concept is just opposite to deflation?

Explanation: Jivagribha was the police officer during Vedic period. Hence, B is the correct option.

Explanation: The ‘Patli Dun’, forms part of the Corbett National Park, is one of the only regions of the Shivaliks to preserve its flora and fauna. The valleys are roofed with thick grasslands and the slopes have lush Sal forests. Hence, D is the correct option.

Explanation: Kula Kangri, Chomolhari and Manaslu are the loftiest mountain peak of the Himalayas Mountain. Mount Abu is a popular hill station in the Aravalli Range in Sirohi district of Rajasthan state in western India, near the border with Gujarat.

Explanation: Four Memorandums of Understanding (MoU) have been signed under ‘Adopt a Heritage’ scheme and six more are at an advanced stage. The MoU for adoption of Red Fort was signed between Ministry of Tourism, Ministry of Culture, ASI and Dalmia Bharat Limited.

Explanation: Bhagadugha was the revenue collector during Vedic period. Hence, C is the correct option.

Explanation: On June 19, the United States withdrew from the United Nations Human Rights Council (UNHRC) and condemned its bias against Israel. The announcement came after the top UN human rights official criticised Washington for separating migrant children from their parents who are seeking asylum after crossing into the country from Mexico.

Explanation: The Canadian Senate has passed a landmark law that legalises the recreational use of marijuana nationwide. The Cannabis Act passed its final hurdle today in a 52-29 vote in the Senate. The bill controls and regulates how the drug can be grown, distributed and sold. Canadians will be able to buy and consume the drug legally as early as September 2018. The country is the first in the G7 to legalise the drug's recreational use.

Explanation: The Union Human Resource Development Minister, Prakash Javadekar launched the new digital initiative of HRD Ministry ‘National Digital Library of India (NDLI)’on the occasion of National Reading Day (NRD) in New Delhi on June 19, 2018. The library has been developed by IIT Kharagpur. It is a single window platform that collects and collates metadata from premier learning institutions in India and abroad, as well as other relevant sources.

Explanation: Sangrihitri was the term used for the treasurer during Vedic period. Hence, D is the correct option.

Explanation: Plants have two tissues that help in transportation. Xylem transports water and solutes from the roots to the leaves while phloem transports food from the leaves to the rest of the plant.

Explanation: Common Salt that is Sodium Chloride is used as a raw material for making a large number of useful chemicals in industry.

Explanation: After wound or cut in a body it starts to bleed. But within few seconds or minutes blood cells start to clump together and clot, preventing the further blood loss. These clots are created by a type of blood cell called platelet.

Explanation: After one saros cycle of 18 years 11days 8 hours, the pattern of eclipses repeats.

Explanation: A Total Lunar Eclipse can get a deep red glow and is sometimes called a Blood Moon.

Explanation: Due to dust in earth’s atmosphere during lunar eclipse red colour is seen.

The difficulty level of the above mock test was ranging between easy to moderate level and a good score would lie between 20 to 23 marks. Don’t stop your practice until you achieve efficiency and accuracy. Try another mock test here – General Awareness (GA) and General Knowledge (GK) Mock Test.