SSC CGL 2019-20 General Intelligence & Reasoning Mock Test:  Practice free Online Mock Test of SSC CGL General Intelligence and Reasoning here to understand the latest exam pattern and syllabus of SSC CGL Tier-I Exam. Assess your ability to think and solve reasoning problems. We have covered all the relevant topics from both verbal and non-verbal reasoning segments as both are important from the SSC CGL Tier-I Exam perspective. 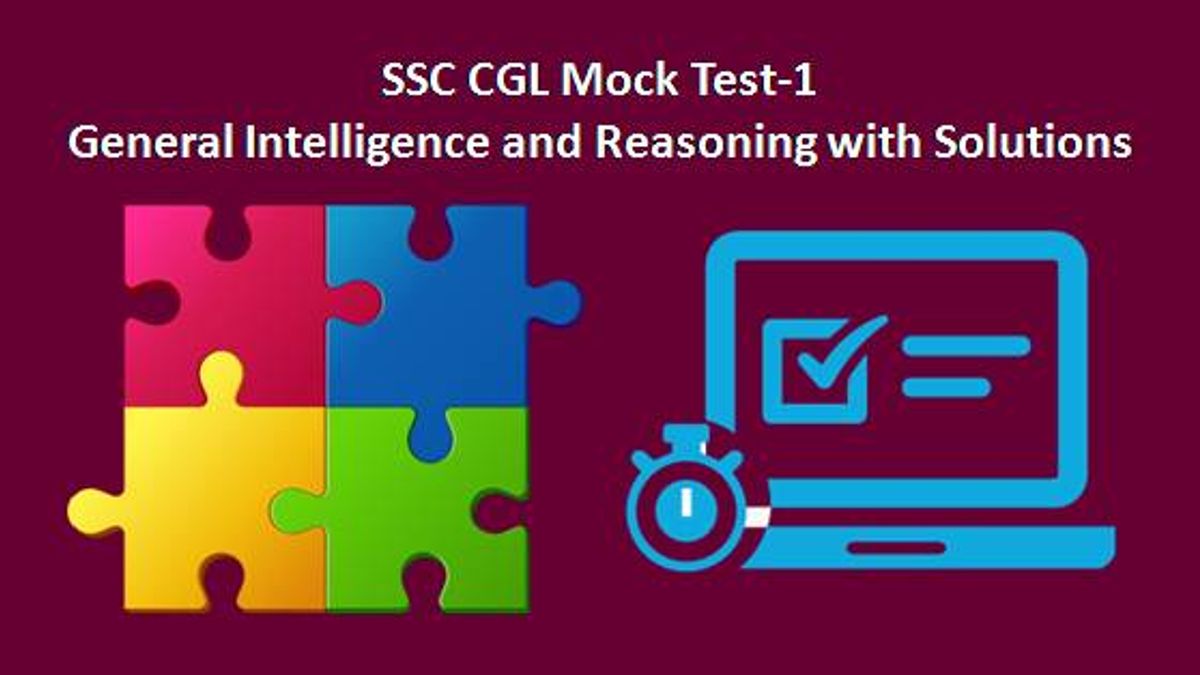 If practiced well, General intelligence and Reasoning can become one of the highest scoring sections of SSC CGL Tier-I Exam. For your practice, we have designed mock papers which will test your ability to think and solve problems. The questions asked in this section are mainly the brain teasers and sometimes can be quite tricky to answer.

So, let’s start the practice with the 1st General Intelligence & Reasoning Mock Test. You must try to finish all the 25 questions within 20 minutes time duration. After attempting all the questions, you can assess your performance by checking answers alongwith their solutions given latter in this article.

1. Merchant' is related to 'Trade' in the same way as 'Doctor' is related to:
(a) Medicine
(b) Prescription
(c) Healing
(d) Examination

2. 'Fish’ is related to 'Pisciculture' in the same way as 'Bees' is related to:
(a) Horticulture
(b) Apiculture
(c) Sericulture
(d) Viticulture

3. Out of the four options given below, three are of a kind while one does not belong to the group. Choose the one which is unlike the others.
(a) Circle : arc
(b) TV : Screen
(c) Book : Cover
(d) Laptop : Charger

5. In a certain code, WORKABLE is written as VOYZPILD, how will BLUNDERS be written in same code?
(a) CMVOEST
(b) TSEOVMC
(c) YOFMWVIH
(d) HIVWMFOY

6. Statements: All purses are mobile. All mobile are phones. Some mobile are rings. No ring is purse.
Which Conclusion is right?
(a) Some purse is ring.
(b) No mobile is ring.
(c) Some phones are purse.
(d) All rings are mobile.

9. A man starts walking towards Northeast diagonally from the left corner of a square plot and turns right after reaching the center of the plot. After some distance he again turns right and continues walking. Which direction is he facing now?
(a) East
(b) West
(c) South
(d) North

Direction (10 - 12): Study the following arrangement of the English alphabet and answer the questions given below.

10. Which letter is tenth to the right of the letter which is exactly the middle letter between U and W?
(a) W
(b) T
(c) S
(d) None of these

11. Four of the following five are alike in a certain way based on their position in the above arrangement and hence form a group. Which one does not belong to that group?
(a) YIB
(b) VXM
(c) SCR
(d) LNI

12. Amit is cleverer than Rohan. Sudeep is cleverer than Amit, but not more than Harshit. Garima is the cleverest of them all. If they are arranged in ascending order of cleverness, then who among the following will hold the middle position?
(a) Amit
(b) Rohan
(c) Sudeep
(d) Harshit

17. Select the missing number from the given responses.

19. A statement is given in the following question and it is followed by its four alternatives in which one alternative either support of refute the statement. Find out the alternative from each question.

I. The person who is punctual, always has some spare time.
II. One should always plan a time-schedule for work.

20. Out of the five given figures, four are similar in a certain way. One figure is not like the other four. Find out the figure which does not belong to the group, i.e., which does not share the common features/ characteristics with other four figures:

21. Choose the alternative which closely resembles the mirror image of the given figure:

22. Which image fits in the answer figure?

23. Which answer figure will replace the question mark?

24. In the following example, find the one which resembles the pattern formed when the transparent sheet, carrying a design is folded along the dotted line along the direction shown by the arrow. 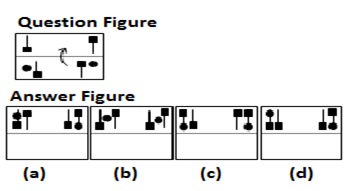 25. Choose the box that is similar to the box formed from the given sheet of paper (X).

1. Answer (d)
Explanation: - A doctor “examines” a patient, whereas a merchant “trades” goods.

3. Answer (d)
Explanation: - Second one is the part of the first one, except laptop: charger. 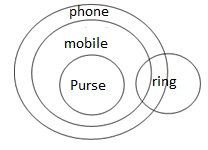 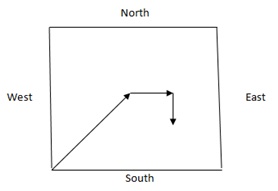 21. Answer (b)
Explanation: Correct answer is option b)

23. Answer (e)
Explanation: The figure rotates through 180o and the head of the arrow attached to the main figure, gets inverted.

24. Answer (a)
Explanation: After folding the paper we will get option (a) as an answer.

25. Answer (a)
Explanation: Correct answer is option b)

We have covered the following topics in the above Mock Test-1:

The difficulty level of the above mock test was ranging between easy to moderate level and a good score would lie between 20 to 23 marks. Don’t stop your practice until you achieve efficiency and accuracy. Try another mock test here – General Intelligence and Reasoning Mock Test.