In this article, we have given all 25 solved questions of General Intelligence & Reasoning asked in SSC CGL tier-1 exam held on 31st August, 2016 (Morning shift). please find questions with proper analysis and explanations.

In this article, we have given all 25 solved questions of General Intelligence & Reasoning asked in SSC CGL tier-1 exam held on 31st August, 2016 (Morning shift). Please find the question’s distribution for this particular paper in the table given below-

From the above table, we can tally that questions are asked from all the important topics of General Intelligence & Reasoning. Almost no topic is left. However, questions asked from Analogy, Series, Odd one out, Analytical reasoning, and Mathematical operations were in higher numbers. Hence, with this observation, we can infer that you should prepare each topic of the prescribed syllabus for General intelligence & reasoning by SSC. Now, Let us have a look of these questions-

Explanation: As a disease is cured, similarly an injury is healed.

Explanation: consider the following table to answer this problem-

Explanation: All except High-Up are exact opposite to each other.

Explanation: All except ALO comprised of the vowels.

Question 6. Find the odd word/letters/number from the given alternatives.

Explanation: All except 87 are prime numbers.

Question 7.Arrange the following words as per order in the dictionary and choose the one that comes first:

Explanation: The correct order of the above words in the dictionary is as follow-

Hence, Temperature is the correct answer.

Question 8.A series is given, with one term missing. Choose the correct alternative from the given ones that will complete the series.
NOM, QRP, TUS, ?

Explanation: the series contains the consecutive letters in different pattern.

Question 10.If it is Saturday on 27thSeptember, what day will it be on 27thOctober of the same year?

Explanation: The month of September contains 30 days and October is comprised of 31 days.

Hence, 27thOctober will be 30thday from 27thSeptember.

Hence, the current age of man and his wife is 32 years and 24 years respectively.

Suppose, they were married y years before; then,

Explanation: The given word does not contain letter ‘O’. hence, option (d.) is the correct answer.

Question 15.If + means division, - means multiplication, '÷' means subtraction, x means addition, and < means less than, then which of the following is false

Explanation: Swap the symbols given in the question –

Hence, option (c.) is the appropriate answer to this problem.

Question 16.Select the missing number from the given responses.

Explanation: All nodes are the squares of the consecutive numbers. Hence, the appropriate answer will be 52 = 25.

Question 17.Ram went 20 meters to the north then turned towards east and walked another 5 meters, then he turned towards right and covered 20 meters. How far is he from the starting point?

Explanation: hence, the correct distance between the starting and destination point will be 5 meters. 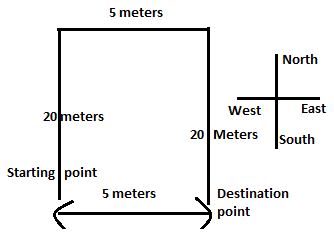 I. All tigers are goats.
II. All lions are tigers.
III. No goat is a lion.
IV. No lion is a goat.

Ans. None of the Conclusions follows

Explanation: The figure given below clearly states that none of the given conclusions supports the statements. 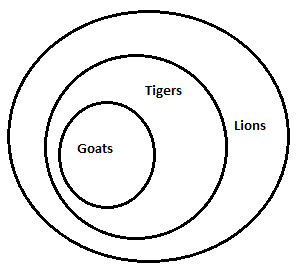 Question 19.In the question figure how many squares are there in all? Select from the given alternatives. 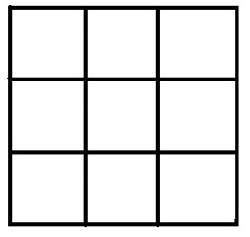 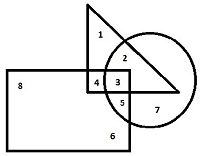 Explanation:  It is obvious from the figure that number 2 represents teachers, who are social workers too. 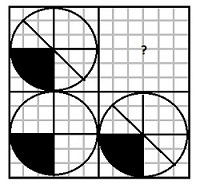 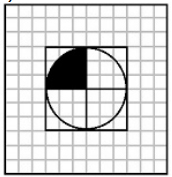 Ans. a
Explanation: The images in second & fourth quadrants are same. Hence, images in first quadrant and third will be same.

Explanation: Superimpose the problem image on the each option and you will find option (a.) the most fitted one. 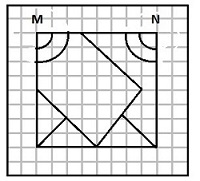 Explanation: The glass image is always 180 degrees inverted through the mirror. Hence, option(a.) is the most appropriate answer.

Explanation: Let us find all possible combinations for the word BEAR.

From this number combinations, we can conclude that option(d.) is the most appropriate answer to this.