The Centenary Second Conference and the 101st Annual Conference of Indian Economic Association – one of the most prestigious organisations working towards the economic growth of India began at Vellore Institute of Technology, among the finest and premier private higher educational institutions in India. 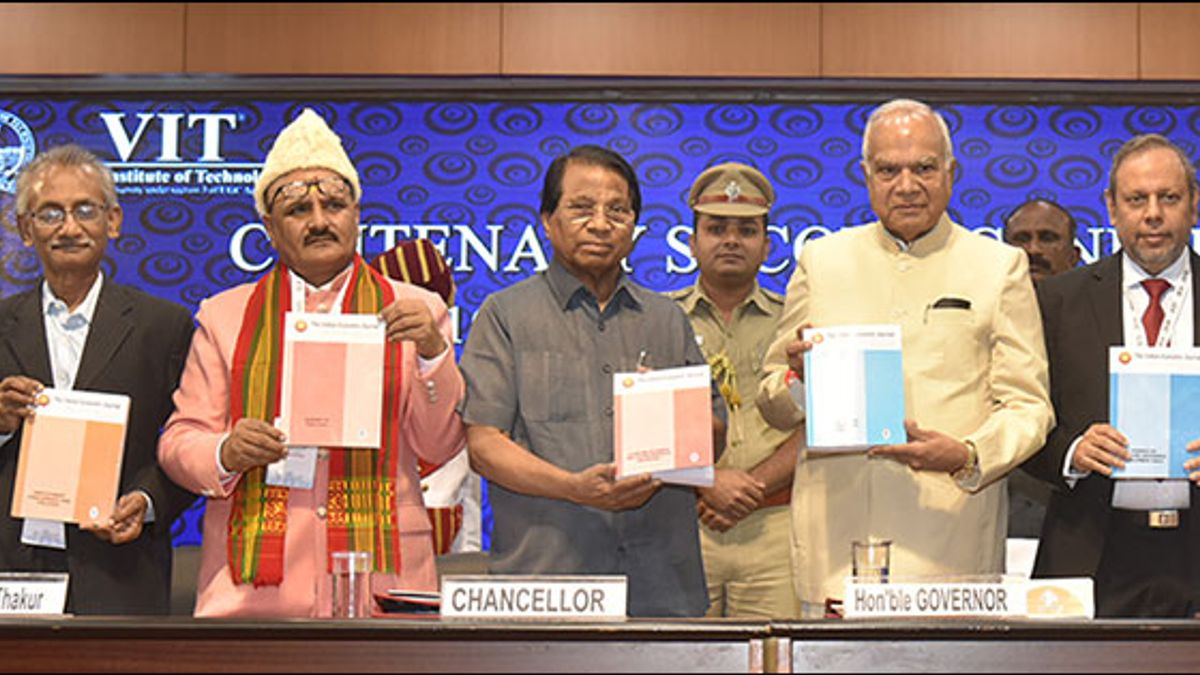 VELLORE: The Centenary Second Conference and the 101st Annual Conference of Indian Economic Association – one of the most prestigious organisations working towards the economic growth of India began at Vellore Institute of Technology, among the finest and premier private higher educational institutions in India.

Mr. Banwarilal Purohit, Governor of Tamil Nadu, was the Chief Guest and inaugurated the annual three-day Conference. He also released a special souvenir on the occasion and the first copy was received by Dr. G. Viswanathan, Founder and Chancellor of VIT and President of the Centenary Second Conference. The three-day Conference is being inaugurated by the Department of Commerce of School of Social Sciences and Languages, VIT. Over 1,700 noted economists, academicians, experts in the field, research scholars and young researchers and students are taking part in this conference. Dr. Sekar Viswanathan, Vice President of VIT, welcomed the distinguished gathering at the inaugural function held at Anna Auditorium. Mahendra Dev, President of IEA, outlined the objectives of the Conference.

In his Presidential Address, Dr. G. Viswanathan, Conference President, said that he was immensely pleased that people from over 22 States of India associated with the field of economy were taking part in this Conference. The participation of this delegation of economists in the Conference will pave the way for economic growth and development.

Experts in the field of economy, Dr. Viswanathan said, were the eyes for a nation’s growth and progress. With a population of 136 crore, India’s share of world population was 18 per cent, while occupying just 2.5 per cent of the world’s area and having only 4 per cent of the world’s total fresh water resources. India was now at a stage when both land and water resources had to be conserved and protected. He feared that at the rate in which agricultural lands were being converted for housing purposes, there might even be a situation resulting in food shortage.

He said that a vertical growth of housing units, instead of horizontal expansion of housing areas, would result in better and proper land use in the country. He pointed out monsoon had become erratic and at times, the country received rainfall even once in two years and hence the country was at a stage to protect its existing natural resources. He said that there were 41,000 lakes, tanks and other water resources in Tamil Nadu alone and as they were not properly maintained, they were not in a position to conserve rainwater during the monsoon season. During the monsoon, 300 TMC feet of water drained into the Bay of Bengal from Cauvery and hence steps should be taken to prevent the colossal waste of water. He said that in developed countries, the advancements in education and healthcare alone were pointers to the development of the nation as a whole

Further, if one had to identity a developed nation, it could be seen by looking at the amount of financial resources allotted to education out of its total Gross Domestic Product. In India, only 4 per cent of India’s GDP was spent on education and the situation had remained mostly unchanged for the past 70 years. This had to be increased to at least 6 percent.On health we spend one percent whereas advanced countries spend 7 to 9 percent. Dr. Viswanathan said that 55 per cent of India’s population was below the age of 25 and providing quality higher education to these youth would accelerate India’s development, but 75 per cent of eligible people did not receive higher education. He said it was now the opportune time for the Central and State governments to ponder over this and take steps to increase the amount spent on higher education. He also pointed out that the per capita income in India was 2,100 US Dollars, which was very low compared to $ 10,000 in China. He appealed to experts in the field of economy to devise ways and means to increase the opportunities for the young people to have access to quality higher education so that they get well paid jobs, resulting in the per capita income of the country.

In his address, Mr. Purohit said that he was happy to be taking part in the 101st Annual Conference of IEA at VIT. He said that for the past 100 years, IEA had rendered tremendous contribution to the country. He said India had the largest and most advanced economy between the 1st and 18th centuries, while being economically integrated with the world, with high levels of trade, investment and migration. Even during the Mughal Empire, India was the world leader in manufacturing, producing 25% of the world’s industrial output.

The advent of British rule changed all that and British economic policies gave them a monopoly over India’s large market and resources, resulting in an economic drain causing India’s share of the world economy do decline from 24.4% in 1700 to 4.2% at the time of independence in 1947.

The decades after Independence witnessed transformation of India into an economic power and the first four decades after independence saw industrialisation focused on self-sufficiency and import substitution. He said the deliberations will go a long way in guiding the formulation of economic policy for the coming years and also had a special word of praise to Dr. Viswanathan for the efforts taken to organise the Conference.

Sankar Viswanathan, Vice President, Pro Vice Chancellor Dr. S. Narayanan, Dean of School of Social Science and Languages Professor Velmurugan were among others who took part in the inaugural function. Anil Kumar Thakur, General Secretary of IEA, delivered the vote of thanks.

Disclaimer: The information provided in this Notification is solely by Vellore Institute of Technology (VIT)., Jagranjosh.com bears no representations or warranties of any kind, express or implied, about the completeness, accuracy, reliability, suitability or availability with respect to the information. Individuals are therefore suggested to check the authenticity of the information.