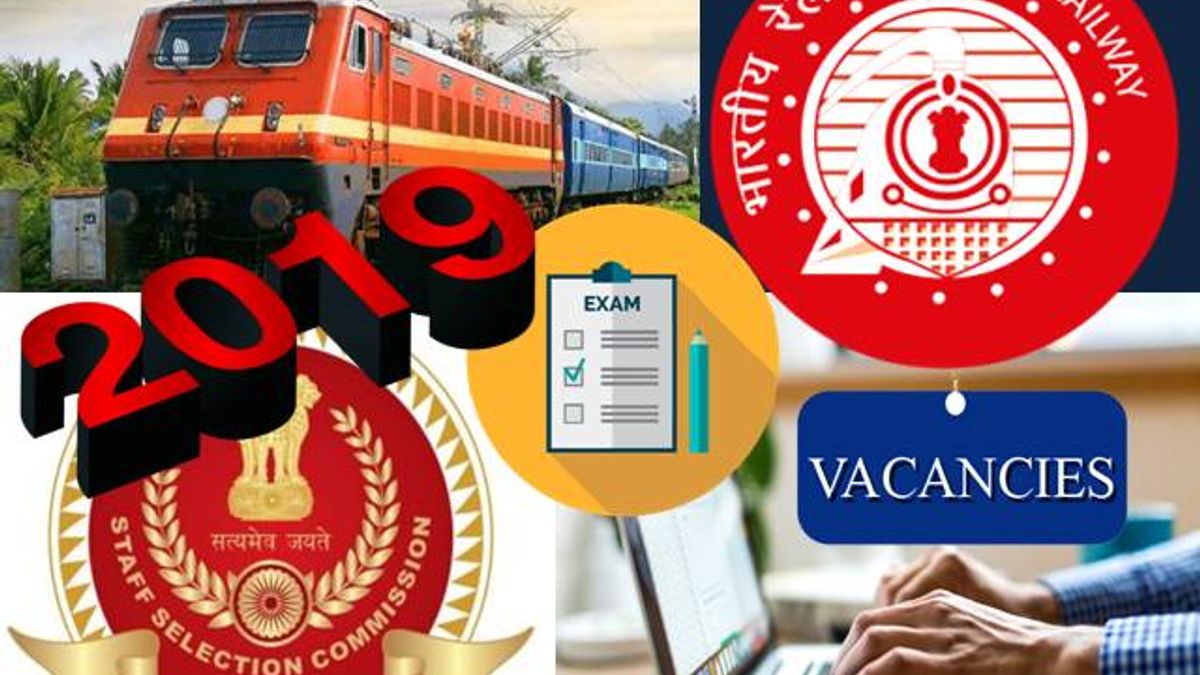 Every year crores of candidates apply for the Railways and SSC Jobs to get a Government Job. The year 2019 also witnessed the announcement of some major government exams in the Indian Railways and other Government Organisations whose exams are conducted by the Staff Selection Commission. Indian Railways announced lakhs of vacancies under RRB Group D Level and RRB NTPC 2019 Recruitment. Over a million of candidates applied for the various SSC Exams like SSC CGL, SSC CHSL, SSC MTS, etc. So for the ease of the candidates, we have compiled the list of top 11 Railways and SSC Exams held in 2019. Let’s first look at the top 5 railways exams of 2019 and then top 6 SSC Exams of 2019 in detail:

In 2019, Indian Railways announced lakhs of vacancies under different posts like RRB Junior Engineer (JE), RRB Non-Technical Popular Categories (NTPC), RRB Paramedical, RRB Ministerial and Isolated Categories (MI) and RRB/RRC Group D Level 1 Posts. Amongst these Exams, Railway Recruitment Board (RRB) has almost finished the recruitment of RRB Junior Engineer (JE) and RRB Paramedical Posts. Now, the next railways' exams which are going to be held soon in the year 2020 will be RRB NTPC, RRB/RRC Group D Level 1 and RRB Ministerial and Isolated Categories (MI) Exams. So let’s have a look at the details of the top 5 Railways exam:

At the beginning of the year 2019, Railways made a major announcement of recruiting 13487 Junior Engineer (JE), Junior Engineer (Information Technology) [JE(IT)], Depot Material Superintendent (DMS) and Chemical & Metallurgical Assistant (CMA). RRB JE CBT-1 Exam was held in the month of May 2019 and CBT-2 held in August 2019. On 2nd November 2019, Railways declared the final RRB JE 2019 Result at various zonal websites. Candidates can view the details of the RRB JE Salary after 7th Pay Commission, Job Profile and Promotion Policy from the link given below:

RRB has concluded the recruitment of 1937 Paramedical Vacancies announced this year by Indian Railways covering major Paramedical posts like Staff Nurse, Health & Malaria Inspector, Pharmacist, ECG Technician, Lab Assistant, Lab Superintendent, etc. The Computer Based Test (CBT) was held from 19th to 21st July 2019 and the final result was declared on 9th September 2019. Check the RRB Paramedical Vacancy Details and Eligibility Criteria from the link given below:

RRB Ministerial and Isolated (MI) Categories 2019 online application process was conducted from 8th March 2019 to 22nd April 2019 for total 1665 Vacancies. Eligible candidates applied for the posts of Ministerial and Isolated Categories (MI), like Stenographer, Chief Law Assistant, Junior Translator (Hindi), PGT/TGT/PRT, etc., in different Zones and Production Units of Indian Railways. Earlier, RRB MI 1st Stage CBT 2019 Exam was scheduled to be held between June to July 2019. However, Railways have still not given any update related to RRB MI 2019 Exam and Admit Card Release Dates. Candidates can view the detailed Exam Pattern and Syllabus RRB MI 2019 Exam from the link given below:

Staff Selection Commission (SSC) conducts some of the major exams for the recruitment of Graduate, Higher Secondary and Metric Level posts under various Government Organisation/ Departments/ Divisions. Every year millions of candidates apply for these posts in the hope of getting a government job. In 2019, SSC held some of the major exams including SSC CGL & CHSL 2018 Exam which got postponed by almost 1 year due to the SSC CGL 2017 Paper Leak case.  So let’s have a look at the details of top 8 SSC Exams held in 2019:

SSC conducted the Combined Graduate Level (CGL) 2018 Tier-1 Exam from 4th to 13th June after 1 year of postponement. As per the official notification released by SSC, around 25.97 Lakhs candidates registered for the exam in 2018. Amongst these candidates, 8.36 Lakh candidates (32.23%) appeared for the exam. SSC held the exam in 33 States/ UT's covering 131 cities and 362 examination centres. On 20th September 2019, SSC declared the result of CGL Tier-1 Exam and 1.74 Lakh candidates were shortlisted for Tier-2 Exam. SSC CGL 2018 Tier-2 Exam was held from 11th Sep to 14th Sep 2019 n online mode at various centres across the country. On 25th October 2019, SSC declared the CGL Tier-2 result and shortlisted 57921 candidates for Tier-3 Exam (Descriptive paper) which is scheduled to be held on 29th December 2019.Candidates can view the SSC CGL Exam Pattern & Syllabus from the link given below:

SSC Multi Tasking Staff (MTS) 2019 Paper-1 was held from 2nd to 22nd August 2019 (13 Days) in online mode at various centres across the country for Non-Technical posts. As per the data released by SSC, total 38.58 lakh candidates registered for the SSC MTS 2019 Exam and out of these only 49.73%, i.e., 19.19 lakh candidates appeared for the exam. On 5th November 2019, SSC declared the result of SSC MTS Tier-1 Exam and total 120712 candidates were shortlisted for Tier-2 Descriptive exam held on 24th November 2019. SSC MTS 2019 final Selection will held under two age groups. Check the details from the link given below:

SSC JE 2019 Paper-1 Online Exam was conducted from 23rd to 27th September 2019 for the recruitment of posts like Junior Engineers (JE) Group-’B’ posts in Civil, Mechanical, Electrical, Quantity Surveying, and Contract domain. SSC JE selection process consists of two stages, i.e., Paper-1 and Paper-2. SSC JE Paper-2 will be held on 29th December 2019 in offline mode. It will be a subjective paper where all the questions have to be answered in a descriptive manner. Candidates can view the detailed Exam Pattern and Syllabus of SSC JE Paper-2 2019 from the link given below:

SSC Central Police Organisation (CPO) Recruitment can be a great opportunity for those who wish to join Delhi Police and some of the best paramilitary forces of India (CRPF, BSF, CISF, ITBP and SSB). Under this recruitment process, candidates can apply for the posts of Sub-Inspector (Executive) in Delhi Police, Sub-Inspector (GD) in Central Armed Police Forces (CAPF), and ASI (Assistant Sub Inspector) in CISF (Central Industrial Security Force). In 2018-19 Exam, a total of 2.32 Lakh candidates appeared for the exam and 20920 candidates including 18750 male and 2170 female candidates were declared qualified for Physical Test Round. SSC CPO Sub-Inspector (SI) & Assistant Sub-Inspector (ASI) 2018-19 Physical Endurance Test (PET) & Physical Standard Test (PST) was held by CAPFs from 22nd to 31st July 2019. Later total 4418 Male and 332 Female candidates were selected for the Paper-2 which was held on 27th September 2019. Candidates can view the latest Exam Pattern of SSC CPO Exam from the link given below:

Our endeavour is to constantly update you with each and every important Railways and SSC exam notifications officially announced by Indian Railways and Staff Selection Commission. Candidates applying for the Railways and SSC Jobs are advised to regularly visit this page for more updates regarding various Government Exams.